The Secret Passage Behind the Books (short story)

He slowly opened his eyes. Lying on the floor, he glanced around the room. Books, that's all he could see. Books were next to him, on shelves, and even one was on his face. He took a slight stretch before he sat up. "Am I in a library or something?" He wondered. The last thing he remembered was falling onto a bookshelf and then falling into a deep hole. He looked around the room; it looked more like an underground tunnel. Piles of books were stacked up on the bookshelf all along the wall. I grabbed a lamp that was near him and started walking. Just as he thought, he wasn't in a room. "It's a passage, but where to?" He asked himself. Walking through the passage, he started questioning how he had possibly even ended up there. "Maybe I bumped onto a book that's secretly a lever, and it opened into this place or something. But what about falling into a deep hole? Was that just my imagination? Is this whole thing just a dream?" He slapped himself as hard as he could make sure. Of course, nothing happened. Feeling disappointed, he continued along his way. Bookmark here

Soon he saw something that looked like the end of the passage. "YES! I can finally leave this place!" She shouted in excitement. He started running towards the 'end.' He was closing up to the wall. Then he pushed as hard as he could at the border. It opened up. To where? It looked like a dungeon with thick stone brick walls. There were candles everywhere along the wall. On the ground, there it was. A thick book opened in the middle and was on fire. Terrified for his life, He ran through and out of the passage into the dungeon-looking place. He looked up and saw a clock on top of the path he just went through. "I wonder why that's there." He wondered. Bookmark here

He looked behind his back, "AGHHH, WHO ARE YOU?" He screamed in terror. "What are you doing in my cell?" The creature asked. The man examined the beast. It was a dragon. "That explains why the book is on fire. The creature was probably trying to read it, but he couldn't, so he got angry and threw flames on it or something, haha." He said to himself, trying not to laugh. "I don't know how I even came here, though. One minute I was in my house, and now I'm here," he replied. "Well, then let me introduce myself. Yes, I am a dragon, but you don't have to be scared of me. Even though I have robbed seven banks, stolen five purses, burned up roughly 90 houses, and killed a bunch of people to the point, I can't count. Well, if you have no reason to be here, then I might not kill you." "Oh, thank god," he said to himself in relief. "But for that to happen, you need to help me escape this place. Deal?" "I just came here; I don't know anything." "Then I can teach you; you are a human, so you have more of an advantage, understand?" "If this is gonna save me from being killed, then sure." And together, they worked to make a plan to help the dragon escape.Bookmark here 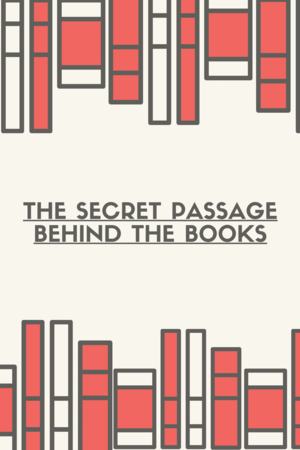 The Secret Passage Behind the Books (short story)