A dim lit room, reveals a refrigerator and countertop with a knife holder. There is a single empty slot in the knife holder where a kitchen knife would fit. Within this room, a boy with medium length dark violet hair yelled at a middle-aged man with short blonde hair. The boy quickly approached the older man and grabbed him by his shirt to pull him in for a headbutt. Afterwards, the man stumbled backwards and fell back onto his rear. As the man attempted to get back up, he felt his hand touch a small blood splatter over the floor.Bookmark here

The violet haired boy then looked back at the man with a face of anguish. He began to tremble out of rage and other intense feelings. He then slowly extended his quivering hand towards the man on the floor.Bookmark here

Suddenly, the boy woke up from what appeared to be a dream. His hand was outstretched towards the ceiling in the same position he saw it in while he was dreaming.Bookmark here

I had another dream about that incident, the boy thought to himself. He then reached over to the side of his bed for his phone to check the time. As he saw that it was nearly seven in the morning, he decided to get up out of bed and get ready for his first day of senior year.Bookmark here

The boy went to the restroom to freshen up. He brushed his hair and his teeth and then also washed his face. As he finished washing his face, he looked up at his reflection and stared at his own stoic expression and red lazy looking eyes. This boy is named Rayner Kingsman. Rayner's attire for the day consisted of a black long-sleeved shirt, dark blue jeans, red shoes, a knitted white bracelet upon his left wrist, and two black necklaces.Bookmark here

As Rayner walked to school, he noticed a moving truck pass by. If Rayner lived anywhere else, this wouldn't be out of the ordinary, but he lived in a small town by the name of Sproutling. This was a small town a ways away from the big city with no sort of tourist trap to be found. The only outsiders he saw in town were those who happened to be on the roads at night and needed a place to sleep or those who were just visiting family members. Rayner decided to not question it since it probably wouldn't affect his daily life.Bookmark here

As Rayner arrived at his school, he passed by the sign outside of the front gate.Bookmark here

"Wellspring High School," it read. "Welcome back to school."Bookmark here

Rayner pulled out a folded piece of paper out of his pocket and opened it up. It was his schedule for the school year. There was still 30 minutes before homeroom so Rayner decided to find all of his classrooms before going to his first class.Bookmark here

As he walked around campus, Rayner noticed the other students talk about him as they kept some distance between themselves and Rayner.Bookmark here

"Look, it's Kingsman," one said.Bookmark here

The other replied with, "No way, really? So he's the one who did that?"Bookmark here

"Shush, I think he can hear us. Let's get away from this monster. Hurry!" The two then turned around and walked away quickly.Bookmark here

Rayner ignored them because he's went through most of his high school career hearing things like that. He never argued because even Rayner himself believed that he was a monster. After brushing it off, he decided to go to his homeroom, which was precalculus. When Rayner arrived to his designated classroom, he knocked on the door to see if anyone was in there yet.Bookmark here

"Just a moment," called out a man's voice from within the room. After a minute or so, the man from inside opened up the door so that Rayner could enter the classroom. The man now standing before Rayner had black side swept hair with a black beard and mustache that's neatly shaved on the sides of his face. He dressed in semi formal clothes, much like the majority of all male faculty at the school. This man is Rayner's precalculus teacher, Mr. Leaves.Bookmark here

"Good morning," Mr. Leaves greeted in a strong voice. He gave off a gentle smile in Rayner's direction as he said hello.Bookmark here

"I'm your homeroom teacher, young man. You can call me Mr. Leaves. May I kindly ask for your name as well? You're the first student I have the honor of meeting this year after all."Bookmark here

"Right. I'm..." Rayner grabbed his arm and looked down to the floor nervously. He was afraid that Mr. Leaves would dislike him after hearing who he was because of his reputation at school. He then took a deep breath and decided say who he was because it's not like he could hide it forever. "Rayner Kingsman..." He then closed his eyes instinctively to prepare for Mr. Leaves to scream in either fear or rage.
Bookmark here

Instead, Mr. Leaves said, "Pleasure to make your acquaintance, Mr. Kingsman." He reached his hand over towards Rayner to shake his hand.Bookmark here

As Rayner noticed this, he reached back and shook Mr. Leaves' hand. Rayner looked back up to look his teacher in the eyes and saw nothing but a warm expression gaze back at him. "Haven't you heard the rumors about me?" Rayner asked.Bookmark here

"I can't say I haven't," stated Mr. Leaves. He then nudged Rayner on the shoulder and said, "You're a tall lad," while chuckling. "Same height as me at least." Both Rayner and Mr. Leaves were nearly six feet tall.Bookmark here

"So you've heard that I-"Bookmark here

Mr. Leaves interrupted Rayner by saying, "I am a teacher, Mr. Kingsman. I don't take rumors, spread by unknowing students' gossiping, seriously. And if I can be frank, any teacher who would disrespect or ignore you because of said rumors should be ashamed of themselves. It's our job to guide and instruct. Nothing more. Nothing less."Bookmark here

"Of course, I hope you enjoy what the school year brings you. If I remember correctly, I assigned your seat over there." He motioned over to a desk and chair in the middle of the first row by the teacher's desk.Bookmark here

"I'll try," Rayner said, laughing nervously. As Rayner went over to his seat to sit down, he stared outside of the window that his desk was right next to. He looked outside and watched other students that were out near the math building. He watched the different groups of people that were on campus. Big groups, smaller ones, the popular crowds, the nerdy crowds, and even students that kept to themselves.Bookmark here

Even if I don't have a good school year, here's hoping that it doesn't get worse.Bookmark here 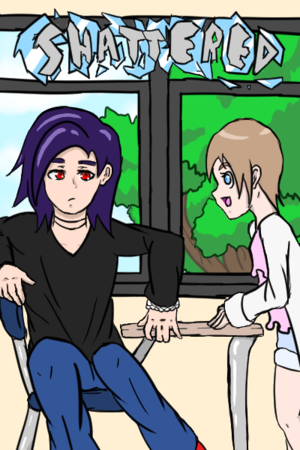