“Hey swordsman! How much longer ‘till we get to the palace?” Jonah asks. Sabishi sighs. Bookmark here

“You’ve been asking this for the past few months. Please just shut your mouth.” He says. Jonah takes a deep breath, before screaming. Bookmark here

“That’s because we’ve been walking the entire summer!” He exclaims. He slaps his right leg. “My legs are dying from all the walkin’ we’ve been doing!” He shouts. Sabishi doesn’t pay any attention to Jonah, and instead just keeps moving forward. Jonah grunts. “You piece of shit! Stop bein’ so annoying! It’s your fault I’m even in this situation in the first place!” Sabishi stops walking and looks back at Jonah. His blue eyes glisten in the sun. Bookmark here

“Fine. Do you want to sit on my back?” He asks. Jonah stares at him for a second, before nodding. Sabishi kneels down onto the floor, and lets Jonah get on his back, before wrapping his arms around Jonah’s legs. Jonah grins. Bookmark here

“Heh heh, it's like I’m riding a horse.” He says. He hits Sabishi’s back. “Giddyup, horsie! Haha!” He yells, as he continues to hit Sabishi. Sabishi sighs. Bookmark here

“You know, if you continue hitting me, you’ll probably fall off.” He says. Jonah scoffs. Bookmark here

“No way I’ll fall off.” He says with a grin. Sabashi sighs, before letting go of Jonah’s feet, and Jonah proceeds to fall onto the ground with a loud thud. “You... Didn’t your parents ever teach you manners!? You stupid-” He pauses, and looks up at the sky. Sabishi turns around, and notices that Jonah’s gaze has turned elsewhere. He looks up towards the light blue sky. Except it's not just blue. The sky is stained with the color grey. There’s smoke in the air. Sabishi quickly turns towards the direction where the smoke is coming from, and quickly realizes that it’s not very far away. He looks at Jonah. Bookmark here

“Jonah, something is on fire. It's probably Demons.” Jonah stares at Sabishi, before quickly shifting his gaze away from him. Bookmark here

“I know that…” He says. Sabishi turns around, and begins running towards the smoke. “H-hey! Don’t just run away like that! Damn it!” He screams, running after Sabishi. Bookmark here

Half an hour later, Sabishi arrives near the entrance of a village. He can smell the smoke and the flames. As he begins to make his way into the village, something catches his eye. No, someone. A little boy. He can’t be more than eight or nine, and he was running as fast as he could from the village. He was stained with blood and soot. Tears were streaming down from his eyes. Sabishi begins to run towards the child, but the boy stops running. He looks back at the village, and then looks at Sabishi, as if he’s considering his options. But before he can finish his careful consideration, Sabishi runs up in front of the child. The boy begins to cry, as he begins to slowly back away. Sabishi stares at the child, and sighs. Bookmark here

“Child, what happened here?” He asks. The boy doesn’t respond. He’s shivering with fear. Sabishi kneels down. “Don’t worry, I won’t hurt you.” He says. The boy stops moving back, but still appears to be scared. Sabishi smiles. “I promise.” He says. The boy stares at Sabishi, before falling to the ground. He stares at the dirt below him, as his vision begins to get clouded by the tears rushing out of his eyes. Bookmark here

“Mama…” He slowly says. He begins to scream. His tears form a puddle on the ground below him, as he cries in a confused state of anger and sadness. Bookmark here

“It was Demons, wasn’t it?” Sabishi asks. The child continues crying, but as he cries he slowly nods. Sabishi grins. “Well, I won’t let them get away with this.” Sabishi says. As Sabishi stands up, Jonah runs up behind him, before headbutting Sabishi. Sabishi yelps in pain, before falling to the ground, slowly patting his back. Jonah stares at Sabishi in anger. Bookmark here

“You jerk! I can’t believe you just left me there!” Sabishi groans in pain. Bookmark here

“Hey!” He yells, before looking down at the boy, who is still bawling. He groans, before looking back at Sabishi. “You better come back in one piece! I’m the one that’s gonna kill ya! Not them filthy demons!” He screams, as Sabishi runs off. He sighs and plops his behind down on the ground, and then stares at the kid. “Hmph. Stop crying.” He says. The kid stops crying for a second, and looks at Jonah. He sniffles, before asking a question. Bookmark here

“U-um. Aren’t yo-you my age?” He asks. Jonah grits his teeth together, before screaming at the child. Bookmark here

“NO I’M NOT! I’M 13!” He screams. The boy sniffles before breaking into tears once again. Jonah groans. Bookmark here

In the meantime, Sabishi had arrived at the village. He closes his eyes, and then enters. He can smell the charred remains of the houses all around him. He opens his eyes, before looking around. Scorched bodies are everywhere, burned to a crisp, with some body parts completely missing. He doesn’t even do as much as flinch at the sight, however. His eyes have seen horrific killings like this for some time now. Those monsters are always the ones that cause horrific events like these. As he walks among the bodies, staring at the works of art the Demons had created, he begins to hear screams. Screams of pleasure, and sadness. The screams of terror he knew all too well. He followed the screams, and eventually wound up in front of a gigantic feast. Women were getting defiled as children and men were getting eaten. Some were still alive as the Demons bit off their legs and arms among other things. Sabishi stares at this scene for a few seconds. He stares at the Demons and the cruel acts that they were committing right in front of his eyes, right up until one of the Demons notice him.Bookmark here

“A human!” The Demons scream out, pointing in Sabishi’s direction. The other Demons look at the direction he's pointing at, before laughing. After all, how can an ordinary human challenge a large group of Demons? Does he have a death wish? These are the thoughts circulating through the Demons’ minds. Sadly, Sabishi is no ordinary human. He grits his teeth, and pulls his sword out of its scabbard. The Demons are still laughing. Laughing as their heads are falling to the ground. Sabishi’s sword slices through each of the Demons’ heads in a matter of seconds, as he moves with speed that only a superhuman can possess. His sword and body glow as he moves incredibly fast, chopping off each Demons’ head like he’s chopping up some vegetables with a butter knife. As the Demons’ blood splashes on his face, Sabashi feels joy. To be able to murder such violent creatures gives him utmost pleasure. To be able to murder those responsible for the death of his wife, gives him more happiness then anything else can give him. Within a matter of seconds, every Demon there has died to Sabishi’s sword. But Sabishi doesn’t stop. He continues to run and cut, culling everything in sight. By the end of his attack, the Demons aren’t the only ones to have died, but the women they were playing with, and the children and men. No one was left at the end of Sabishi’s onslaught. And at the conclusion to this massacre, he tumbles to the ground. Blood is all over his clothes and face. And his sword is stained with not just the Demons blood, but human blood as well. Bookmark here

“Shit...I lost myself again…” Sabishi mutters to himself. He grunts as he slowly gets up, and sheaths his sword. He looks at his hands. Blood. So much blood. He doesn’t grin this time. Instead he wipes it on one of the many corpses, before walking away. By the time he exits the village, it's just a series of ruins. Ruins littered with the corpses of humans and Demons alike. Sabishi slowly makes his way back to Jonah and the boy. The child has calmed down, and Jonah is sitting beside him. But when he sees Sabishi, his eyes light up. Bookmark here

“Swordsman!” He yells, before running over to Sabishi. But he stops just before he can get too close, and he looks closely at Sabishi. “There’s a lotta blood on you, huh?” Sabishi sighs. Bookmark here

“The Demons killed everyone in the village. I murdered every single one of them.” He looks down at his clothes. “That’s why I’m like this right now.” Jonah stares right into Sabishi’s eyes. Bookmark here

“What about Eric?” He asks.Bookmark here

“The kid.” Jonah explains. Sabishi’s eyes widened. He remembers the child, who is currently hiding behind Jonah. He looks down at the ground. Bookmark here

“I said leave him.” Bookmark here

“We can’t just leave him here!” Jonah screams. “You took me with you, so you gotta take this guy with you!” He yells, while pointing at Eric. Bookmark here

“I can’t do that. I won’t be able to take care of him.” Bookmark here

“But you took me with you!” Bookmark here

“That’s because your parents dying was directly because of me!” Sabishi screams. Jonah flinches. He’s not used to Sabishi yelling. “And in the end, you’re already 13. You won’t always need my help.” He looks at the boy, who looks like he’s on the verge of tears once again. “I won’t always be able to take care of him…” Sabishi explains. Jonah places his hands on his forehead, and looks towards the sky. Bookmark here

“He’ll have to fend for himself.” Sabishi says, before turning around. “Come, Jonah.” Jonah gulps, and clenches his fists, before looking back at the child. Bookmark here

“I’m sorry, Eric.” Jonah says, before walking away from him. The boy stares at Jonah. Then he looks at Sabishi. Then back at Jonah. Tears once again begin to flow out. Bookmark here

“Wh-what do I do now?” He asks. Neither Sabishi, nor Jonah respond. Eric stares at the two as they walk away from him. He screams. A scream of absolute despair. A scream that tells the story of how he lost his family, and now his only other hope at survival. A scream that asks the question: “What is my purpose?” But Sabishi has no answer. All he does is just continue to move forward. Bookmark here 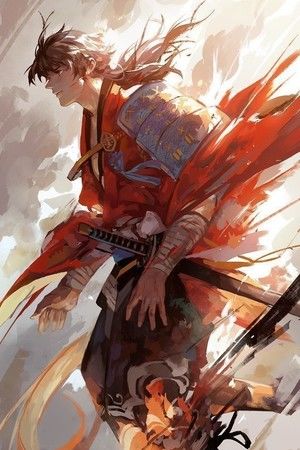