Neither the Demon Lord nor the Holy Princess was the original leaders that had started the war. They were, in fact, the great-granddaughters of the original progenitors of the war that had been raging for so long. The descendants had been born on the same day, the Demon Lord at midnight and the Holy Princess at the morning dawn. From the day they had been born, they had been taught one thing was of the utmost importance. They must kill the other side at all costs.Bookmark here

And so, it was on the dark night of the Demon Lord's 18th birthday that she briskly walked to the summoning chamber. The current Holy Princess had found some farm boy in a backwater village many years prior, and he had grown to be some magnificent hero. Now, the Demon Lord was in trouble. Her Dark Amy was getting pushed back from this hero, and it wouldn't be too long before he showed up at her door.Bookmark here

She needed a powerful force of her own. A commander for her dark army that would finally be able to end the war that had raged for so long. She had flipped through forbidden texts for weeks and weeks to reach this solution. She finally found a book buried deep in the library with a sticky note that warned, 'Do Not Cast This Spell' written plainly on it. Naturally, she opened the book to see what it was. It depicted a spell that would summon a being from another world, from a different plane than the one she currently lived in. She was interested.Bookmark here

After weeks of prepping, the Demon Lord was ready for the spell. She had found a way to add to the simple summoning spell to make it even more deadly. Upon summoning, the being would be imbued with her dark magic and potentially become the most powerful being in the Dark Army, second only to her.Bookmark here

However, the spell had its drawbacks. The Demon Lord's mana would be drained for a years' worth of time after the summoning, give or take. Once she determined the spell would have this drawback, she spent a week thinking about its risk. She ultimately decided to go through with it. She was already slowly losing the war, after all.Bookmark here

And so, on this night, she stood in the summoning room alone. It was a dark room, lit only by a few dim candles scattered on the floor. In the center was a stone slab that the being would be summoned on. The Demon Lord reached out her hand.Bookmark here

"O' dark being from another world. Come to my side as my new servant so that we may usher this world into an age of darkness." The words she spoke didn't matter; she just added them for a little flair as she cast her spell. The slab began to glow brightly, and she had to cover her eyes for a moment. When she looked back at the slab, something was lying down on it. She smiled and leaned in close. Her smile didn't last long.Bookmark here

"What... What is this?" she exclaimed.Bookmark here

On the slab, sleeping peacefully, was an ordinary human. A male who wore strange clothes and had an odd device in his hand. The Demon Lord fell to her knees.Bookmark here

This would become the beginning of the story of how the long war finally came to an end. Bookmark here 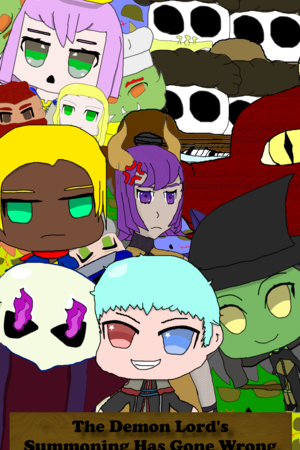