Memoir Of A Cigar

Most would agree that a house,on a very basic level, consists of four walls and a roof. Under normal circumstances, I would be inclined to agree. However, these are most certainly NOT, normal circumstances. I apologize. That last line seems to give off the impression that something is terribly amiss in this situation, when in actuality, it's more-so a small curiosity. A minor oddity that would make you stop for a split second, and examine the object of interest. That object of interest being, a house that consists of three walls and a roof. Allow me to go a bit more in-depth.
Bookmark here

Inside this house we are greeted by a quaint interior. A singular room with an opening in the wall where the front of the house would presumably be. The walls are all painted in a beige(ish) color, with randoms photographs engulfed in oval frames practically surrounding the interior. There is a lone staircase that leads straight into the roof, or in other words, a dead end. A completely useless staircase. Moving on, we see-wait! No! We are not moving past this baffling waste of beautiful design that is the aforementioned staircase. Bookmark here

Moving closer in, the smaller yet nonetheless beautiful design details on the staircase become more and more apparent. What seems at a distance to just simply be a desert sand colored staircase, is actually a magnificent example of woodwork. Starting at the top of the staircase we see an individual rose carved onto each handrail, which slowly twists around their respective handrail as the rose gradually gets thornier and thornier the closer we get to the end. What was the designer of this beautiful piece trying to convey? Mayhaps it was an accidental creation of beauty that was simply placed in it's proper place by the interior designer of this property? Perhaps the interior designer, who I have just now decided to dub "Idida" for God knows what reason, saw this staircase in a derelict back alley and decided to give it a new home. Idida took this lone staircase back to his equally derelict suburban household. Unfortunately, Idida completely forgot he already had a staircase in his home. In an act of true love for his love-at-first-sight staircase, Idida painstakingly removed his original staircase from his home. It may have taken hours, it may have cost him a couple of fingers, but alas...nothing would prevent Idida from giving his new staircase a home. Finally, Idida had removed the old staircase and, shoddily I might add, installed the new staircase. In this hellhole of a house, the staircase sat for months, all the while Idida stared at it with a happy yet troubled look on his face. He had always known his home was not fit for a beauty such as the staircase, yet he was always afraid to admit it. Afraid to admit that the staircase was not meant for him. Idida knew he had to find the staircase a better home. So, in a move that could finally be considered by some individuals as an act of true love, Idida went out searching for a home for the staircase. After many days and many nights, Idida found a lone individual that was interested in the staircase. The stranger was willing to pay quite the large amount of money for the staircase. Idida and the stranger arranged to meet at an abandoned wrecking yard in the middle of nowhere. Idida, for some reason, agreed to this. After going back to get the staircase and arriving at the meet-up with said staircase, Idida shortly reflects on his time with the staircase. He realizes that he may never find another staircase of anywhere near equal beauty. However, Idida keeps his resolve, and brings the staircase to the stranger. The strangers notes the beauty of the staircase, and asks Idida to assist him in moving it into his house. The stranger says that Idida would have to be blindfolded on the drive to the staircase's new home. Idida, further proving that he is in fact bat-shit insane, agrees to these terms. The strangers and Idida finally arrive at the destination. A house...with three walls and a roof. Idida notes the strange number of walls, to which the stranger straight up ignores Idida. Losing his train of thought at an alarming speed, Idida follows the stranger inside. Idida sees no spot for the staircase, and proceeds to ask the stranger where he wishes to place the staircase. The stranger lets out a string of laughs that sends chills down Idida's spine. The stranger tells Idida that he will be forced to place the staircase in this house, whether he wants to or not. Idida, appalled at the mismatch between the staircase and the house, shrieks in terror. With each second that Idida spends installing the staircase, he inches closer to death. Idida can hear the inner screams emerging from the staircase's soul. Idida reminisces about his time with the staircase, about a time when things were much simpler. Having finished installing the staircase, Idida collapses out of exhaustion and remorse for what he has just done. He can no longer hear the screams of the staircase. In an attempt to show love to this lonesome staircase, Idida has only succeeded in killing it. The stranger kneels over Idida's dying body and chuckles softly before standing up again and walking out of the house. Idida, in his last moments of life, imagines a future where he and the staircase lived together in a beautiful house. A future where the staircase was as happy as it could be. Idida racks his brain in pursuit of the answer to one question: "Where did I go wrong?" Idida spends his last few moments descending further into the bowels of insanity until he finally loses consciousness. Idida died knowing not what he did to deserve this fate. Perhaps he didn't deserve it. Perhaps this was simply a cruel trick played by the gods, and Idida was simply the unlucky victim picked by the gods. Idida may be gone, but his desperate attempt to find this staircase a new home shall not be forgotten. Bookmark here

What a beautiful yet tragic story befitting a beautiful yet tragic staircase. I must say, my favorite part of the story just has to be the part where I made it all up. That's right, Idida isn't real. I simply created him on a whim. The staircase's origins are a mystery that we shall never know the pleasure of solving. I'm sorry. I meant to say, a mystery that YOU shall never have the pleasure of solving. I know very well the origins of this staircase, but I have decided against telling you, for it would be unsatisfying. You will go to sleep tonight with the question of "what was with that staircase" on the back of your mind. You may have times where you forget about it momentarily, but the question will always be there gnawing at the back of your mind until you descend into the bowels of insanity just as Idida did. Bwahahahahahahahahahahaha-Bookmark here

"Jesus Christ, do you ever shut up?"
W-what? Who said that?
Bookmark here

"Hey, Pinkie, I thought you said we should just let this unfold? I didn't think we were supposed to mess with the current events?"
W-who said THAT? Who are you people?Bookmark here

"Sorry, Fluoride. I just said that as an excuse to see where this was going. It seemed interesting." said the individual known as PinkieBookmark here

"Ah, ok. Well, you could have just said that from the beginning." replied the other individual known as Fluoride.Bookmark here

"Eh, just seemed more convenient to lie. Besides, I lost interest. Now we can focus on finishing the job."
Excuse me...who exactly are you?
"Huh? Oh yeah, you're here too. My name is Pinkie and that guy over there is Fluoride. We're here to...how should I phrase this? Bring you peace."Bookmark here 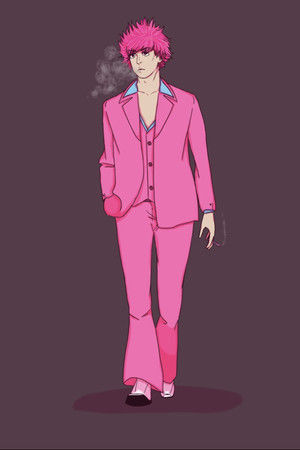 Memoir Of A Cigar