(Volume One) Prologue: The Diviner

A formless and unprecedented protuberance. Amid a once stagnant atmosphere—a bubbling, cloudy tear in the space before them began to crown itself in the form of a malicious entity. The hairs on their napes erected in sheer dread in response to what they were witnessing. It had finally arrived.
Bookmark here

A woman’s voice exclaimed from behind the man who had been standing the closest to the unraveling dilemma. Her face, now stricken with a far more lucid mask of anguish than his own. Yet, even his nervous and forced smile wavered as his eyes didn’t leave the emerging presence across from him for even a second.Bookmark here

“Whatever it is, it’s truly befitting of the warning she gave earlier after all...” Bookmark here

Sluggishly, its ominous and absurd stature continued through the formless portal while its audience could only watch on. It was now simply standing there, as if it were some sort of grotesque and fleshy statue—aimless in its motivations. Its appearance was an unwelcomed and sudden one, but had also already been predicted prior. Thanks to that, they were given the courtesy of having a few hours to prepare in advance. Bookmark here

Albel activated his investigation skill, in attempt to divulge any bit of information he could from the unrecognizable colossus. And as he did, a small status menu appeared before him. The result startled him even more. Despite having his [Investigate] skill maxed out, he was only given a partial success. Bookmark here

“Geez, so that’s all you let me have, is that it?! Could have at least given me a handicap or something, dammit!”

From a murmur to a disgruntled howl, Albel clenched his fists in frustration—in surging hopelessness. It had been the first time he had ever experienced being unable to fully read the status of a creature in that world. Especially the level, and that alone, absolutely terrified him. Being without the ability to assess the INFO attached, he knew he’d have to rely on trial and error. That was something he couldn’t afford to risk or even waste time on. Even so, this wasn’t something he’d be able to back down from either way. Bookmark here

Aha. This is a rather substandard start, isn’t it...? Going in completely blind? This has to be some sort of sick joke, right? This wasn’t something I accounted for at all. Bookmark here

He rested his hand against his chest, only to feel the racing of a hammering heart. An ensnaring heat swelled from deep within him, tugging along with it a plethora of nausea. His courage was crumbling before he had even started the battle. Bookmark here

I had planned to start off slow, but— Bookmark here

Allowing a golden aura to envelop over him, he immediately changed out of his previous gear and into his main equipment. A set now befitting of his separate and main Class. Noticing this from behind, the woman once again spoke up as if she were already anticipating his train of thought.

“Albel! There’s no way you can—”
“Ah, I know already. No need to remind me. It’ll probably be impossible even for me to handle this guy all alone. That’s what this air around it is screaming to me...”

He knew better than to assume otherwise. Experience alone had practically help verbalized that in the form of what stood before him currently. It was on a completely different level than anything he had encountered as of yet. Bookmark here

“Then we need to regroup and fall back! Did you forget why we’re here in the first place?! Leonora already said—!”
“Eru.” Bookmark here

His tone was stern, stopping her from saying anything more than that. More importantly, she had an inkling of what he was planning on declaring next. She understood the why, but couldn’t help but make an attempt at acting against that lingering decision anyways. Bookmark here

“Do you really expect me to just leave this thing here? We don’t have the slightest idea of what it can do, nor how far it could possibly go. We evacuated the capital with the intent of not letting this calamity leave from here to begin with, did we not?”
“We did...”
“Then all of that would have been pointless if we decide to turn tail and run away now. This thing, even my [Investigate] barely told me anything about it. We don’t have any other choice.”

Even double—no, triple checking its status only provided the same results. They would only be able to fly in completely blind, each muscle slathered and tensing in perpetual caution until the end.

Albel could hear Eru’s words catch in her throat. Without a doubt, that collective sphere of worst possibilities had attempted to crawl out. And still, she decided to hold her tongue instead. Bookmark here

A worrywart as ever. Bookmark here

“Sorry, Eru. I need you to fall back—alone—to where Leonora is. Tell her that everyone needs to keep their distance as well. And if I—!”

A sudden urge to look away came over him, and as he turned back toward the beast, Abbot’s head began making slight shifts and sways. It had yet to move anything other than that. Albel now felt it was necessary to not mince words with her any further. Without being able to tell how he would fend against the oddity, a small part of him knew he had to account for the worse. Choosing a proper set of words to give her, he continued in a more amiable tone.

“If anything happens to me here, make sure to regroup with the others, okay? I’m certain they’ll be pretty pissed off that we decided to do this without them, but I’m sure they’ll be able to come up with some sort of countermeasure. If it comes to that. And alongside you, that is. So, please, head back without me, Eru.”
“You...I swear, you always... It’s unfair...”

Tears began to form along the edges of her eyes as she returned her line of sight toward the ground. Clenching her hands at her sides, Albel could hear the tone of her voice shaking in anger, dissatisfaction and worry toward what he had asked of her. Even so, he knew she would listen. He had come to trust her above anyone else in that world after all. Bookmark here

It’s definitely a bad habit of mine, isn’t it? Finding myself in situations like this, and all the while, unintentionally dragging you along. Bookmark here

With a hesitant hand, his fingers met her bangs as he began gently stroking the top of her head for what could potentially be his last time. The woman before him was practically family to him now. The younger sister he never had, and one that definitely didn’t belong going against something of this nature.

“Well, it’s not like I plan on going down without a fight. You of all people should know that best, Eru. Everything we’ve done up until this point—and everything that will come after—I didn’t come this far just to lose it all. Don’t you remember our promise? We still have a whole world to explore.”
“Albel...”

Her sniffling was now accompanied by her embracing the palm of his hand against her head as she pushed slightly forward. And as Albel finally removed his hand, he turned back toward the still faintly swaying beast. Gripping his quarterstaff, he reaffirmed his resolve as the sound of footsteps faded from behind him.

“It really does suck having her worry about me like this.” Bookmark here

It wasn’t as if this were the first time, and if he could somehow make it through this—he knew it wouldn’t be the last. Bookmark here

Thank you for listening to me, Eru. Bookmark here

Closing his eyes, he could once again feel those piercing stares that lingered on him from a distance.

“Besides, I don’t like the idea of dying more than once against my own will anyways! So, sorry, to whatever deity, higher being, and those of unknown origins who are watching! Any of you in whom share similar or opposing goals, ideologies, intentions—and whoever the hell else is betting on my demise from afar! I don’t have a single intention of letting that happen again. Especially here and now!”

Albel adjusted his stance, allowing a surge of varying energies free reign over my entirety as all his focus was now shifted toward the overwhelming presence across from him. There was nothing left to be concerned about other than it. Swallowing his uneasiness, he made his address with whatever confidence he could muster. Bookmark here

“It’s finally just the two of us now. I’m sure we’ll be able to get rather well acquainted by the time this is all over, don’t you agree?” Bookmark here

Verbal silence—instead with the creature’s actions speaking for itself. It was as if the beast could tell Albel was directing his comment toward it as it finally began making slight movements in his direction. Its numerous eyes became glued to Albel’s, and every fiber of his being started sounding alarms just from that simple connection.

In the country’s capital—one devoid of all of its citizens—this place would definitely become one of his most important battles as of yet. Bookmark here

That’s right. I’ll use everything I’ve learned up until this point. I’ll struggle, scheme, and take gamble after gamble if that’s what it takes for me to win in this fight. Even if... Bookmark here

A passing thought, one that Albel knew he shouldn’t humor any further. Bookmark here

No, I shouldn’t think like that. No amount of apologizing to them would quell any of their anger with that way of thinking. Especially hers. Bookmark here

On a southern shore, far from there, her appearance radiated in his mind. Standing amid the breaching bioluminescent tides, her golden eyes and faint smile warmed his very being. Unlike the distant past, he wasn’t in lack of an abundance of reasons to live now—to return to the place where he could truly call home.

As he rose his quarterstaff, he pointed it toward the seemingly insurmountable foe before him—officially declaring himself for all to hear. Bookmark here

“My name is Albel, the Diviner! The mixed-bag practitioner of Divination and Wizardry. And I’ll have you remember this name, of the one who once dominated this world in another life!” Bookmark here 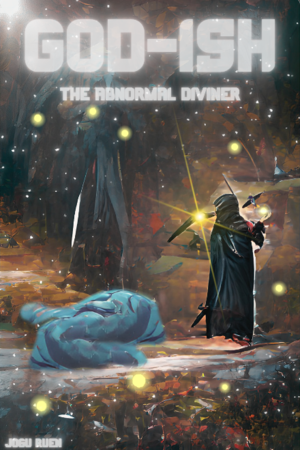