Prologue: Time in a Bottle

How am I supposed to save this world with no power?

The news eventually broke, and the final bells of Wu Li's time at Somerville College of the University of Oxford had been rung. How could he possibly be sad when the happy faces of his group of friends are all that he can see? The lights in his room are the same color as usual, yet for some reason, it felt a bit dimmer than before.

"What did your parents say?" Ed, one of Wu's best friends asked as his tall slender body nearly crashed into the wardrobe, and his long arms nimbly avoided pouring the cup of mixed drinks onto the carpets. That would have been bad for his deposits.
"You know what they will say." Wu forced a smiled and raised his glass, hoping to drain away any ounce of the strange sadness.

Getting a job offer from one of those Fortune 500 companies right after graduation from the Engineering Science department of one of the most prestigious Universities on earth would mean a dream come true for many, and that certainly is the case for his parents.

As Wu tilted his head back and Ed's long arms wrap around his neck, he could already hear the excited chatters from his parents.

Celebrating in the true Oxford fashion, they had the usual pres, downing home-made alcohol from an assortment of leftovers ranging from two hours to 2-weeks-old, before heading down the streets to ATIK, a nightclub located conveniently next to the supermarket.

When Wu woke from the heaviness the next day, he thumbed his phone and called his parents.

Nothing was surprising. Obviously, they were overjoyed by the news. Their prodigal son, the manifestation of their years of efforts and fostering, now finally ready to join the workforce, live a materially plentiful life, meet another corporate girl, give birth to a son, and let the cycle continue.

"Just get the A, and it's all good!" His mother said before being cut off by his father.
"Of course Wu will get an A! He has never gotten anything less!" His father said, his voice filled to the brim with happiness and pride.
"He did once in middle school when that girl was in his head......." His mother corrected before his father made a dramatized sound.
"Go eat good breakfast! We are going out to dinner to celebrate!" His father said, finishing the call.

That was early in February. For many final year students at the University of Oxford, the last term is filled to the brim with stress and anxiety for exams and the final project. The revision sessions were grueling, but whenever he turned this attention to his project, it was as if a new life has been injected into him.

"The history of Science and Engineering...?" His supervisor certainly raised an eyebrow when Wu first brought this idea forward, "That's a rather interesting idea."
"The history of what?! What about 3D printing? Or artificial intelligence?" His mother was in shock when she learned of his final research direction, "I read about those on Wechat!"
"Wow! I didn't expect you to be into history, mate!" Ed slapped Wu's shoulder before lowering his voice and leaning towards him, "Are you into Maddie, the history girl?"

For some reason, when he's learning about the process of creation, of exploration, and of understanding the nature of the universe, he felt liberated. There are no limitations to where science can take you, only roadblocks and temporary challenges that will be overcome eventually.

Individually, those scientists are all smart, creative, and intelligent way beyond the comprehension of any normal humans, but collectively, when they put their minds together, they can achieve the impossible, even by their standards.

Wu wanted to be a part of that. But unlike in science, his obstacles are a little awkward.

"All fucking excuses," Wu grunted as he scratched his head out of frustration. He couldn't follow through with what he wanted to do, and now, he sat alone with regret by his side in the empty lab with a white screen in front of him.

February somehow felt simultaneously ages ago and as if it was just yesterday. Those days and nights spent scouring through the internet and various libraries learning all the stories of the scientists before him had finally come to an end.

Tomorrow is graduation day and the last day that he will have access to all of the resources at the University. That freedom that he sought and cherished while sailing through the ocean of knowledge, now slipping away from him with every passing second. He loved his research institute, a building far away from the Oxford town center and 20 minutes up a hill just to the Eastern side, next to the group of hospitals.

The summer evening heat of August in Oxford would have made the lab he's in unbearable, but for some reason, he enjoyed this heat alone.

Sounds of footsteps snuck their way through the corridors, and the building security popped his head around the door before letting out an earnest chuckle. His head is nearly fully bald, and the security uniform on him looked well-worn. He was carrying a half-empty water bottle, and he waved his chubby hands at Wu as he looked up.

"It has been a while! Wu!" The old security guard smiled before leaning against the door, "I had a feeling that it's you still here at this time, but it has been so long!"
"Yeah, the exams kinda......occupied all of me." Wu smiled, "Good to see you doing well as usual."
"Hah! Lost a few pounds in the summer. Being taking the bike up the hill, instead of the bus." The guard replied, and Wu tried to look away from his stomach, "It's graduation day tomorrow......right?"
"Yep!"
"Still working?" The security guard pointed to the laptop and the workstation that was once Wu's, "Everybody's out partying tonight! Would have been a shame!"
"Actually, not really working. Just reminiscing." Wu smiled before standing.
"HA! Then I don't have to feel bad to walk you out then." The security guard said, clapping his hands together as Wu approached him, turning the lights off as he walked past.
"Not this time."

By the time the two stood in front of the entrance, the crickets had been chirping away in the bushes around the building. The constellation above tonight was extra clear, and Wu's already drenched in sweat at this time.

"Well, I suppose I will see you back here for a Ph.D.?" The security guard said cheerfully before reaching his hand towards Wu, "I guessed since you are here more often than those people!"
"Ah, I see." Wu smiled back, taking his hand and shaking it firmly, "I suppose......I will see you around."

As the guard waddled away to take care of the final matters before closing the building, Wu hopped onto his trusty bike before taking a look back at the building he spent countless hours in one last time. His future is as inevitable as the coming second, and perhaps it's best for him not to dwell on what could have been too hard.

He will be rich in a few years anyway, he should be happy. His parents are, and so are his friends. So why wasn't he?

As he cycled down the hill, he could hear the music blasting from the windows of the cars that drove by, and he made sure to travel as slowly as possible while sticking close to the side of the road.

Then, a pop song that he couldn't quite recognize started approaching him alongside a pair of massive beams of light. As he turned his head, he caught a glimpse of a teenager drunk out of his mind with a girl leaning all over him.

The music entered its chorus, and Wu watched closely as the front tip of the cheap car slowly approached his body.

"You have got to be kidding......." Before he would have been T-boned into the hospital, a pair of horizontal rings of light formed over his head and under his feet. Before his instincts allowed him to dodge, those light rings let out a light hum, swooping his entire body away and combining into one at around his hip level.

With a loud crash, the car sent Wu's bike flying into the trees as the two in the car screamed. However, as they came to a halt and got out of the car, all that they saw were a broken bike that seemed to have gone.....rogue?

Traveling through what must have been some sort of a worm-hole or portal, Wu's mind felt as if it's being pulled apart simultaneously in all directions. The light around him was initially opaque, showing a grey-colored void beyond the bounds of the portal, then, he began to see everything turn to black with the occasional red lines running around him.

"Shit! My mom would have killed me if I died here." Wu cursed, scrambling around for a way out and looking down to see his entire body intact. Then, those red lines started to grow and brighten, turning into a mixture of yellow and orange.

A little while later, a light ring formed around his waist. Immediately, Wu recognized the rings by their width, color, and radius. Trying to put up his arms as a pointless defense, he couldn't do a thing but watch as those rings split apart violently.

A gust of wind rushed into his face as if a pressure chamber had been opened, and he landed softly on a piece of cracked rock, surrounded by flames and smoke. Glancing around and trying to fight off the insufferable disorientation in his head, he immediately caught a glimpse of someone that's on the ground next to him.

It was a girl that looked about his age with light-colored skin and short black hair with the occasional white strands. Her hands were gripping onto a piece of stone with strange and alien incantations written all over and her grey eyes looked like a pair of beautiful semi-transparent pearls.

Their eyes met, and she cracked into a smile.Bookmark here 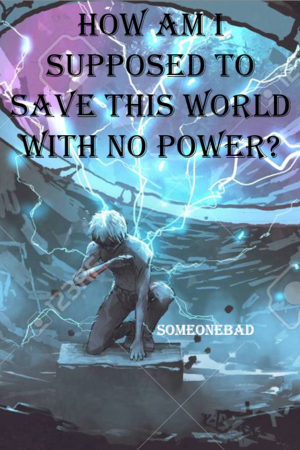 How am I supposed to save this world with no power?