The Future to Come

Weight of an Overflowing Soul

Ever since Gigi conceived their first child, there have been too many restless twilight hours where Joe would sit up and observe her as she sleeps. Even eleven — or was it twelve — years after they first met in middle school, he still feels out of place at her side. In the very beginning, it was the quietness of her timid voice and the maladroit rigidity of her mannerisms; now, it is the loudness of her formidable presence and the inexplicable grace with which she faces every new chapter of life.

These days, he often found himself reminiscing. As unlikely as their long friendship and subsequent romance was, it happened all the same. Joe and Gigi. Gigi and Joe. Back in their high school days, these names were seldom uttered without the other, with each begging for its missing half. To all who knew the duo from their middle school days, their friendship was a fated event in the grand history of the universe. Energetic and outgoing Angela, called Gigi by all her adoring friends and classmates, was once a lonely nerd who kept to her studies. Meanwhile, mysterious and thoughtful Joseph, known simply as Joe, was once a violent boy who acted out for attention. But upon their meeting, the girl gained the confidence to befriend their peers while the boy was at last satisfied by the wholehearted appreciation of one person. The rest, to their classmates in senior year, was history. But of course, history is only a preface to all the stories to come.

Long has it been said that two is company and three is a crowd. After almost five years with only room for each other in their impenetrable little bubble, they had finally let another person in. Through them — through her — they had both grown so much in one short year. But once that short year was over, it was once again only them. And it has been only them until now, when they will let a third person into their lives once again.

To think that the shy bespectacled girl with the lopsided ponytail he knew back in middle school would become the headstrong woman who cradled his head in her lap as he cried in joy at the sight of the lines on the pregnancy test. Joe, who fancies himself an ordinary person in comparison to his better half, feels impossibly far from her while she lays by his side with her chest gently rising and falling. It is during these times, when he cannot not rely on her soft touch or her tender smile, that Joe understands she does not belong to him alone.

Such a train of thought also reminds him that, as much as he wished to hide from the truth in the shifting shadows of their bedroom, he too belongs not only to his wife. They, together, carried the two halves of a dream that ended much too soon. The duty of honoring a forgotten legacy is one shouldered by Gigi every waking day, but come the night it falls on him alone to remember a name now lost to the short history of the past six years.

Tonight, Joe must sleep. After a brief eternity, he lies down. As he closes his eyes and tries to ignore the mild tossing-and-turning on his right, stray rays of light from the street lights outside sneak in between the curtains. Though not a soul walks in the streets of that peaceful neighborhood, those street lights shine on, valiantly staving off the darkness on the night of a new moon. The stars are still shining from beyond the looming clouds, but for now their twinkle is tenderly wrapped in a black veil, hidden away from the few who still look up at the sky stretching infinitely beyond the rooftops. 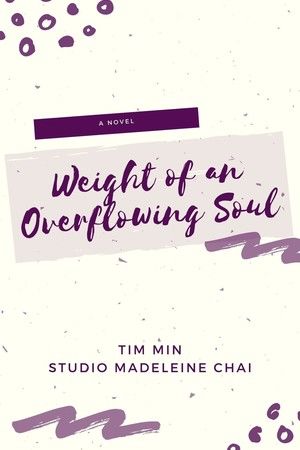 Weight of an Overflowing Soul