A chimney finds itself in a family home of unworthy owners. It drizzles down with envious greens and blush reds; frosted in glimmering glitter and cheerful shimmers of different colours, none too dull or dark. And too, couches and bookshelves and trains on tracks, ridden by small men with little hats pulling the horn as steam roars from the engine; a bellowing eruption. A volcanic incursion.Bookmark here

Red, orange and yellow building blocks arch over the tracks and build to a skyscraper in height. A crane balances off the skyscraper, towering over the little train tracks from above. But Geronimo: down the chimney, a man whispers his merriness with a ho ho ho. Bookmark here

Onto the coal-covered fireplace, unlit to warmth, the thin legs and giant boots of a plum-shaped man plop down, smoke clouding out: black ash in rush. Bookmark here

The man sticks, glue-fixed with their roundness, to the cramped funnels honey-sweet breading of red delight. As the man struggles for release, opposite the chimney grasping tight, a door creeks open; a small child walks into the room, holding together their hands clamped-clasped in brave of their fright, as they tiptoe through the rooms egg-shell walls blocking the moons light from getting inside the silent room.Bookmark here

Their eyes seep low as they rub them with their sweaty hands and then scratch their hair with their blue sleeves: icy tides crashing at spiked rocks.Bookmark here

The child makes their way past the train, hoping not to disturb the railway men from their duties and clamber over to the noise that woke them.Bookmark here

Noticing the man sticking out of the chimney, the child's eyes widen as they jump in joyful excite; gleeful glee filling their whimsical surprise, as they see the big man himself flailing his arms and legs to push himself down the narrow chimney.Bookmark here

With a nervous shuffle towards the man, the child hangs hold of the merry fellow's shoe and drags them down the chimney.Bookmark here

The thud of their landing meets with the ground, as does the navy eyes of the white-bearded man and the cacti-cried eyes of the child. Bookmark here

Crimson of reds, most white of snow. Shivering cold: a feeling close to breeze whistles through the room; yet no windows find themselves open nor present in the room blue with white.Bookmark here

Bells clatter above; one of bronze shoots down the chimney and stops at a crawl, creeping towards the child's feet.Bookmark here

Scratching rings and tingle tings and wrangling mangling rustling things; more bells shoot down the chimney, more and more crawling down to meet the others.Bookmark here

Confused, the child backs away; yet only more chase down and stumble towards them; filling the room like running a bath with a ceiling, no way of exit other than the drain. But the plug of the door is open. The bells rinse over to the exit and clamber towards the door peeking into the room. Bookmark here

Continuing, the tangle tangs and clanging clangs bash the door and shut it closed. They fill the room slowly, blocking the door and blocking any sight of the big, round man dressed in red. Bookmark here

Creaking cracks break into crunch; the jingles crumple and spread out, crumbling and collapsing from structure. The man is once again visible, clouded in dust from debris. Bookmark here

The man grows, their red coat bloating up, their beard's snow spreading and their face contorting and distorting.Bookmark here

Towering over the town, people wake from their colourful, blocky homes to look for the commotion only to find something else instead.Bookmark here

The man's limbs take the shape of ribbons, his hands that of drumsticks, his once navy eyes now brighter than ever and his beard trapping the townsfolk in snow.Bookmark here

Skin of fur. Hooves of feet. The red of their nose glows yet even more to the stars and moon in the coldly-lit night sky.Bookmark here

Cookies and milk and barber-striped candy canes of red and white planted next to houses turning to gingerbread and snow globes of cold crying spite. And yet even more, with wreaths of holly, merry with jolly, and wooden soldiers marching silly beside bowls of chestnuts and stuffing; forks and spoons set themselves to plates as a pot of gravy waltzes towards a large tables center. Connotation. Culmination.Bookmark here 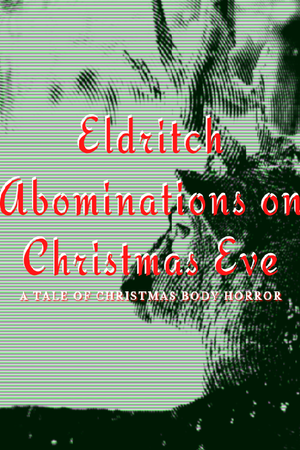