"As you might know, magical girls are bound by a contract. Who is giving out these contracts and who gets chosen? Some are more eager to find out than others."

Another morning in one of the outside wards of Japan's capital city. The sun is slowly rising, gradually coloring the concrete of the high-rise buildings.

Today will be a nice early fall day. Some birds were chirping, telling Hanako that it's morning. It was because of this, that she was able to wake up even before her alarm rang.

The first sun rays were breaching the curtain of her window, hitting the shelf with a remarkable collection of manga. Magical girl manga. As far as the eye could see. Posters and other merchandise like figures were carefully placed around her room.

She was a huge fan. Reasons for her amazement ranged from the brave and righteous characteristics they embody to the adorable outfits they were wearing.

Her most precious possession was the complete 12 volume set of the Magical Pudding Guardian manga. Since it is a limited edition, the covers have a holographic foil worked into them. Not a lot of people own a full set and it would earn a high price on online auctioning websites now because they are long out of print. Of course this particular set will never be sold.

Hanako is completely convinced that magical girls exist. And some time she would become one herself. This was her declared goal. However she never told anyone about this, because she dreaded being made fun of.

Today would be just another typical day of going to school, coming back home, sleep, and then repeat. At least to her prediction. But today had an encounter waiting for her, that would change her remaining middle school life.

She slowly removed her blanket and moved out of bed. After opening the curtain, the whole room was filled with sunlight. Even though she was quite early today, her little sister and her mother would already be in the kitchen, eating their breakfast. The father would already be off to work.

Hanako didn't want to be the typical anime character hurrying to school late with a slice of toast stuck in her mouth, even though it might have been a good start for her story. This day, she decided to eat at home and was good on time.

She is the kind of person that always comments on how good the food is to bring a smile to the person who prepared it. Today it was her mother that got to hear her kind words - and she meant it.

"Another typical day", is what she thought on her way to school.

Listening to opening songs from magical girl anime, she took the train. A few stops later, she arrived at her destination.

Other students of her class would already be waiting for lessons to start. Some were casually chatting with their friends while others were swiping through the most recent posts on social media.

She moved to her seat which would be fitting for a main character in any anime or manga story. It was located in the back of the classroom, by the window. Like so many other chosen heroes' seats also are. But nothing happened to Hanako even though the seating was so promising. Especially a contract to become a magical girl hasn't arrived. Yet.

On the way to her chair, she passed behind a boy of her class who was seated in the same row towards the center of the classroom.

Hanako took a short glimpse to see what this seemingly tired person was looking at and her eyes opened wide.

"Eeeh!? How cute is this costume looking!! Are you interested in magical girls by any chance?"

The name of the boy was Kouhei. It was rare for him to be at school this early. Normally, he would arrive at the classroom at the last possible moment because he always has trouble getting out of bed after staying up too late. If he would come for the first period at all.

A bit startled he replied "Uh. Well. I guess they do have cool costumes sometimes?"

Normally it was frowned upon for boys to be interested in magical girl content. It was basically made for females. The only redeeming factor to sell a few copies to a male audience were the revealing outfits. That's what Kouhei was after as well.

Hanako was looking over his shoulder talking about the character displayed on his smartphone screen.

She was basically a prodigy for magical girls. There was probably not a single person on this planet more knowledgeable about this kind of story than her.

"Right right!! They really do have really cool ones! For example...!"

Kouhei was lost, not recognizing a single character she listed. His interest was just superficial. He didn't really care about the story or about the characters in itself. The thing he was interested in were only the sexy costumes.

Hanako went on for a bit, evidently happy to have finally found a soulmate to talk with. Or rather, to talk to.

The male student wasn't given a choice to deny Hanako's invitation to the school's library after class to research magical girls.

"... And that's why I will become a magical girl!" Her detailed monologue ended. She layed out several reasons for her fascination.

"Are you aware that they don't exist? It's just an invention to get girls to buy DVDs and merchandise..." Is what he wanted to say initially, but since this would be too devastating of a statement, he held back his words and instead replied with a simple "Uh. Right.."

"I wonder when I will get contracted!"

For Hanako it wasn't a question about if she will be contracted, but when.

Normally not being known to be a good thinker, Kouhei realized his chance and took it. He was able to make quick decisions on the fly when it counted. Like in this very instance.

"Let's see. If you really want to become a magical girl then I guess you should find a mentor who has lots of experience with this topic and who can help you get to your goal."

"Eeeh! Are you such a person Kouhei-kun?"

"I guess you could say that I watched an anime or two about it", the lure was placed and his bait worked like a charm.

"Please become my mentor then!!"

With the lowest bow a person could possibly pull off without falling over, Hanako proposed this idea to him. After a short while of artificially prolonging his thought process and enjoying the sight of an adorable girl bowing before him, he agreed to the proposal.

"If you are this serious about it, I don't have a chance, do I?"

"Thank you Kouhei-kun!!!" She said, lowering her bow even further to a perfect 90° angle, still holding her balance. 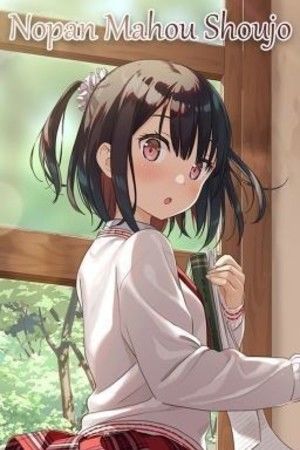