The Oak Tree And The River

The Kingdom of Tarddiad. a land once ravaged by the flames of war, which then got to know peace again under the banner of a hero, and was now about to be brought to ruin by that same hero. In order to stop the catastrophe, the current queen thought of a solution: to summon another warrior from another world in order to combat the previous savior. However, even though the summoned hero was powerful, he ended up being a lazy bum who did nothing but laze around in his giant castle on top of Mount Killaraus, the tallest peak in the world, far away from any kind of conflict. The task at hand became that of getting the warrior down to actually fight, and this mission fell into the hands of the summoners, the Five Nymph Sisters.

“Dryad, it’s your turn today…” Meliae, who suffered another defeat the day before, yawned loudly while still wrapping herself in a thick blanket, like a caterpillar never prepared to break out of its cocoon.

“Ehhhhhh?” Answering her sister was an unenthusiastic noise from the nymph in all green from top to bottom, lying on the nearby sofa gazing empty-headedly at the ceiling. “Do I have to…?”

“We’ve talked over this, Sis…” Instead of Meliae, who had long fallen asleep as soon as her previous statement was said, the blonde girl who mentioned the ash tree nymph the day before answered.

“But I don’t wanna go…” Dryad shakes her head for just a second, before returning to doing whatever she was before.

“It’s part of the rule, Sis. Just go…” Letting out a loud sigh, the blonde girl answer. And finally, the oak tree nymph was moved. Not literally though, for she didn’t take a single step off the sofa, and instead a multitude of roots suddenly spawning from the ground carried the whole thing away, like a comfy boat riding the waves of the seven seas.

“Okayyy…” Dryad’s lazy voice was the last thing the others heard as she left the tower to do her job.

Normally, to travel to Mount Killaraus, one would already take hours even with the aid of magic, sans teleportation. Naturally, none of the nymph sisters expected Dryad to return home in a flash, especially considering her nature. However, even the most pessimistic would not think that she wouldn’t be at their home as the sun was already on the horizon once more.

“This is ridiculous,” nervously biting her lips while gazing at the setting sun, the blonde woman exclaimed, “even if it’s Dryad, this is way too late for a normal routine.”

“I’m sure she’s just off sleeping somewhere, though.” The blue-haired sister answered without much care while her eyes were glued to a small rectangular glass panel emitting a strange blue light.

“Oh, this? It’s a ‘phone’. I saw it in that guy’s world when we summoned him, so I tried replicating it using our magical items.”

“Is this really a good time to go around and make useless things like this, Nereid?” Shaking her head in disappointment, the blonde girl asked.

“Oh, don’t be a worrywart, Naiad,” the blue-haired girl, now Nereid, answered, “besides, information is the key to winning a war. If we could mass produce this, we can… oh god damn it! Another 3-star?”

“Well, anyway, why don’t you go check on her if you’re so worried?”

“Yeah, I guess…” Once more glancing out the window, Naiad clicked her tongue and left the premise.

The nymph representing fresh water was the best in terms of speed among her sisters, and a good reason for which was the aid of the terrain on her side. With a river flowing from the mountain’s peak all the way to the villages and towns in the kingdom, riding along to reach her destination was merely child’s play. Of course, she couldn’t go all the way to the top, since the giant castle had already blocked all creatures from advancing any further up the mountain. For Naiad, however, even she didn’t expect her journey to just end right as she approached the forest.

Still lazing around on her sofa was Dryad, who didn’t even have the decency to hide herself amongst the thick bushes or trees. With a blissful look on her face, the oak tree nymph stretched her body while lying down, like an oversized housecat enjoying the warm sunlight.

“Dryad, what are you doing?” Naiad approached the lazy nymph, and, with a bonk on the head, forcefully woke her up from her slumber.

“Ouch… Oh, it’s you, Naiad…” The force of the punch did indeed drag Dryad back to reality, but only for a second as she then immediately fell asleep again as soon as she saw her sister’s face, much to the latter’s dismay.

“Wake up! Why are you sleeping here in the middle of nowhere?”

“It’s your turn to drag that stupid NEET off the mountain!”

“… Oh, yeah… I was gonna do that, but then the weather felt so good, so I decided to sunbathe for a while… oops…”

“But I’m the older sister though…”

“That’s not the point here! What do we do now? You know we can’t go there at night! Who knows what kind of danger lies around!”

“Well, then we should just skip a day, right…” Still with a sleepy voice, Dryad answered while simultaneously pulling onto Naiad’s hand. And, as if an unknown force was put on the latter, as soon as she touched the surface of the object, her eyes grew heavy and her body lost all of its strength all of a sudden.

“It’s okay… Let Big Sis pamper you…” As her little sister soon drifted into the land of dreams, Dryad rode her chair back to their home, signaling a job well done for their day. 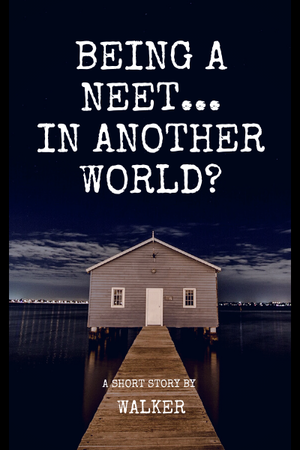