Two opposing gates open; 1000 step out of each. Sides warm. Sides cold. A Colosseum grand in size is filled by a roaring audience’s flame. A podium. In the centre of the arena it stands, engulfed in reds and yellows of fury.

The flickering monolith towers above, shadow cast onto the 2000 fighters present with a warming smile. One of slimness stands atop, bathing in the arrogant flame.

“Welcome, dear challengers! Tonight, we aim for a simple preliminary.” Declares the figure, “as always, there are no rules. If we say someone cheats that is final. We may proceed once 101 are left.” They take a deep breath and bow. “With that, good luck. Let the combat begin.”

Fighters ready themselves. Some stand aimlessly, breathing. Others sit down and pray. Yet, out of the 2000 fighters, leaning against the fenced off walls of the arena, is one lone combatant. Dressed red and purple; clothes of felt and shoulder pads of steel pave their freckled skin. They look over at the fighters, all of them scattering their distance between one another in the vast space.

The lone combatant makes notice of one other in green of their eyes. They spot them taking a breath and closing their eyes, watching them trot over towards a backpack-wearing fighter.

The distant one leaps at their foe, a mighty kick, a battle cry flying at them with their drooling mouth rolling over the arena in joy. The distant two clash. A parry of kicks. One goes in for a headbutt. The other evades. The green eyed one charges in. Olé. The backpack hanging from their back; they pull a spear, ribboned red, out with their teeth.

Grinding teeth together, the blade whirls. Tornado. The other pulls a rifle. Bang, as quick as that the rifle’s bayonet stabs at them. Red whirls around. The spear parries, ribbon flailing.

“Rather good for a brute.” Says the rifle-wielder.

“Bringing a gun to a spear fight, are we?” The other replies.

“So be it.” The rifle’s magazine is ejected, “no bullets.”

The two chuckle. Caws of laughter.

Given flight, they skid back. Readying back for battle.

In rush they sprint, waving winds brash as stormy seas. Once more they clash, sparks cackling as the ex-rifle-wielder whirls their weapon. Tornado. The backpack-wearer does the same. Tornado. The whirling later stops. Before it does the ex-rifle-wielder lunges forth, the two’s tornado’s gnawing at each other. Jittering. Chattering. Clattering. Splattering—blood splattering. The backpack-wearer covers their shoulder. The other spins their bayonet towards the injured one, still spinning their own weapon. Bang.

Blowing off the smoke from their revolver’s barrel is the lone combatant.

The giraffe closes in on the other.

Giraffe? A metaphor you think. No: literal.

They trot over towards the other giraffe fighter, shoulder still wounded. The back-pack wearer pops a vein and grows twice in size. Menacing their hunter, a prey’s final attempt at reassuring safety.

“So, why is someone like you joining a place like this?" Asks the lone combatant, “you, one so weak. Why risk your life for victory here?”

“There isn’t a defined reward though, is there a point in risking your life for that?”

“What else would I do? Eat leaves all day?”

“Quit and you can live.”

“Haha! A funny statement!” The hunter aims their gun, “Well, I warned you.”

“How’d you blow the smoke off your gun?”

“You gritted it by your teeth, how’d you blow the smoke out?” The backpack-wearer asks, “I saw you do it but how did you?”

“Also, what’s that behind you?”

The lone combatant turns around,

“You fell for the weakest trick in the book…”

The face of the combatant shrivels in sweat.

Red whirls: it is blood.

Will they survive however? And who is this backpack-wearing giraffe? Why do they want the reward?

Find out next time, on Giraffe Gladiatorial Combat! 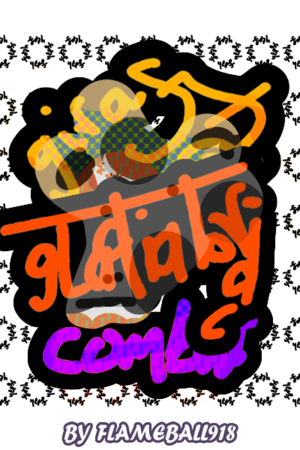