Dying to be reborn

MON : Growing up for the first time, in my second life

The sky was burning red with the rising early morning sun. As Kunei looked out the window of her tiny apartment, tears streamed down her narrow cheeks, mascara leaving dark trails.

This had been the best day of her life and now...

She thought back to earlier in the day, sitting by herself in a corner of the classroom. Kunei was having trouble staying awake as the instructor droned on She had stayed up too late gaming again last night and had barely enough time to get out the door and catch a train, throwing on a baggy sweater and a pair of jeans, toast hanging out of her mouth. 'No time for coffee' she lamented.

Her gaze drifted from the white board to a beautiful girl who was playing with her phone. Midori had put her hair up in a ponytail today showing off a swan like neck. Her blonde highlighted brown hair matched her yellow halter top which in turn complimented her bare tan shoulders.

Kunei spent the rest of the lesson distracted. Then after class Midori had approached her, asking her if she wanted to hang out!

Of course She was just being friendly, but Kunei couldn't help but say yes. As the night went on it became clear that it was a date. It was wonderful, and so was the kiss, but then...

They had run into some of her old classmates from before college, ones that had known the old Kunei and they had blurted out her secret while howling with laughter.

Midori's beautiful face, which had been so kind, so open all night, twisted closed. Kunei had seen eyes like that before, but from her first love it was more than she could handle. She ran home as fast as she could.

The worst day of my life.

Kunei stood on her balcony, below the city was starting to wake up the last shadows of night quickly disappearing. Not another day, I can't face another day. She jumped.

Kunei woke up screaming into a world of harsh, glaring light.

A cheerful voice came out of the brightness,"What a odd way to say hello, but then you mortals have many strange ideas." As the voice paused Kunei started to get her vision back, dark spots bruising the light.

"Certainly strange ideas about friendship, to say the least." The spots formed into a human shape looming over Kunei as she lay on what felt like a stone floor.

"Not that I need to tell you."

"Although now that I think about it, a friend gave me these" The shadowy form raised its arms giving them a little shake which was followed by the unmistakable rattle of chains.

Kunei pushed her palms against the ground lifting herself up into a sitting position and rubbed her eyes.

A tiny woman towered over Kunei, hands on very ample hips. Even with Kunei's eyes fully focused there was an ethereal quality about her skin, which was very dark with faint glowing freckles. She was crowned with a head of wild golden hair framed by two large horns. Her body was wrapped snugly in a white toga, leaving one exposed breast swaying as she jangled silver chains. Kunei stared at a nipple the size of a pencil eraser while watching the fleshy pendulum with a mixture of awe and jealousy. She hugged her knees to her body and lowered her eyes, long dark hair covering her burning cheeks.

Soft dark fingers heralded by a metal chorus grasped her chin firmly and lifted her face so that she couldn't look away. Great green eyes seemed to stare into her soul, pupils darting back and forth as if searching her face for something special. Seemingly pleased the Goddess let go of Kunei and spun away speaking in a dramatically rising voice...

"You may call me Fo'lowna, mortal, the Mother of Monsters. You are dead, and I have brought you here because I need your help!" The Goddess finished arms outstretched to the heavens head back, frozen in place.

For a long moment there was just silence.

"Yes, I am afraid I did mortal, but know that I only did so because my need is great." answered a solemn voice.

"I'm not mad, I can't believe it" Kunei leapt up hugging the Goddess tightly. Excitement banishing the consuming hurt that had still been lingering in her heart.

"Oh my!" Fo'lowna exclaimed almost falling over backwards, her thick thighs bracing to hold them both up. The young woman paused for a second resting her head on a heaving bosom.

"Karma is real, oh Fofo, what powers do I get?" she reluctantly released the startled Deity.

She giggled answering; "Sorry, sorry, Foo'Fanny Master of Mothers, tell me my power, please. Am I going to be the worlds greatest accountant, or the most beautiful Empress the world has ever seen?"

Kunei looked expectantly at her.

"Wellll you see, Goren keeps me closely guarded, so there's really only one way I can even get you out of here..."

"Goren, is that the Demon Lord or something? Wait..." Kunei felt dread in her stomach "oh no! I'm not going to have to die again?"

Fofo blushed still looking shyly away "Actually its kind of the reverse, I am going to have to birth you from my celestial womb." 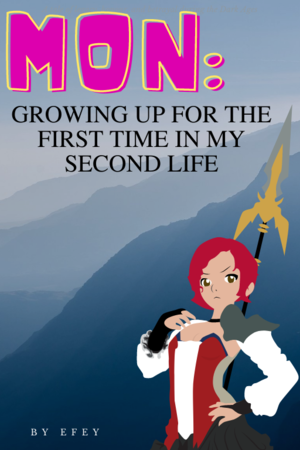 MON : Growing up for the first time, in my second life