Some dreams are better off not coming true!

2D>3D: My favorite Vtuber can't be this Trashy!?

Ren loosened his tie and slouched into his computer chair with a sigh. Blowing steam from the top of the cup of instant ramen he was holding in one hand while grasping his mouse with the other. As the pointer travelled across Hikari Hana's smiling face towards the shortcut for YouTube he admired the wallpaper. It was a special edition, only for the highest tier of fan club membership. In it she was wearing a green yukata, Brown hair done up in a bun with loose strands cascading in front of her warm smile. Looking into her purple eyes Ren felt the stress of his long day melt away.

Ah! I wasn't too late  Ren thought as YouTube opened and he saw that Hana-chan was still live.

When Mr.Tama had asked him to stay late, he had thought he was going to miss her first stream playing Final Grind Quest XII. Knowing that tonight was a big deal for Hana He had spent the work day trying to lay low. FGQ was a huge series and XII had not even been released yet. This could be the stream where Hikari Hana went over a hundred thousand subscribers and Ren had to be there when that happened, no matter what.

He had almost made it but just as Ren had been leaving he saw a familiar bald head weaving its way towards his cubicle like the worlds most boring shark.

"I had a favour to ask you. Management has requested a report on how many people visit our website at three in the morning. I need it done before you leave."

"But Tama-san, you know that doesn't make any sense? It will take longer to make the report the it does to just check the numbers"

"Well my boss wants that information in a report, he hates using computers, and if he wants something I want it, sense doesn't enter into it."

"Besides we both know you have no one waiting for you at home Saito-kun. You don't want to inconvenience your coworkers who DO have loved ones at home. Of course you don't, now get to it."

But miracle of miracles he had managed to finish his ridiculous task and catch the last train home. Although just barely.

Even baldy can't keep us apart Hana-chan!  he thought as he sent a Super Chat saying hello.

The sound reverberated through his tiny one room apartment.

Ren's face twisted in confusion. Setting down his cup of ramen he tried to think of why anyone would be at his door, not just at midnight, but at all.

Did I put out the wrong recycling? It's compostable on Friday, right? Don't tell me they changed the day again!

Exasperated he jumped up from his chair getting ready for a lecture from Chioko-san, the cranky old lady who managed his dumpy two story apartment building.

Saito Ren quickly opened the door. Not even bothering to check the peephole and found himself staring face to forehead with a pretty pink haired girl who was staring at her phone. She was wearing big yellow headphones and a fancy black silk jacket covered with embroidered sunflowers.

Caught off guard he stammered, "Uhm can I help you..?

Suddenly he was conscious of the fact that he hadn't showered and was still wearing his work clothes.

Not looking up a familiar voice said; "are you Failryman26?"

His mind went blank, "Hana-chan?" he half whispered.

"But..but" he pointed back into his apartment; "Aren't you streaming?"

"Oh that, no I prerecorded it."

She put down her phone for the first time and looked him in the eyes, into his soul it felt like.

"Failryman26 you're my only hope, can I live with you?"

His eyes rolled back as his vision started to go white, this is it I am ascending to the heavens, he thought as he fainted in a very manly way. 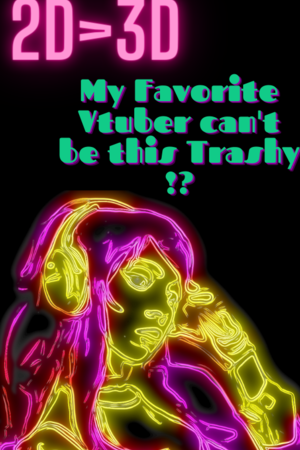 2D>3D: My favorite Vtuber can't be this Trashy!?