A Great Risk for a New Life

I Quit My Job and Sold Lemonade to Gangsters

“Hiko, do you ever think about life?”

With those words, Motosaka Akahiko was immediately brought back to the clacking of keys and shuffling of papers that surrounded him. Ripped from his trancelike focus on his work, he immediately looked at his clock, but even knowing the time, he couldn’t remember if it had been two hours or four since he left his chair.

“You always seem to do that lately. Is anything on your mind?”

“Would I be able to do this if there was?”

Akahiko’s response had an element of truth to it. Data entry is a process said to be so repetitive and boring that it gradually kills both the soul and the imagination. The only reason he accepted the job was the pay.

“Ah, I guess you’ve got a point there… Have you seen the sales reports recently?”

This question immediately put Akahiko on edge. He froze as he suddenly remembered.

“Yeah, that’s what I thought. With our numbers going down this much, the company may be thinking of downsizing.”

“You can’t be implying what I think you are.”

“Ah, but I am, Hiko. We are the most overpaid and under-skilled workers in the company. After working here for almost 25 years, our competitors have found methods to make our jobs obsolete. If the company can find a way to automate our positions, I have no doubt that we’d be the first to go if they decide to downsize.”

Akahiko couldn’t speak. He had vaguely felt that something was coming for the past several months, but he always would ignore what his subconscious tried to tell him.

“Sorry to alarm you. I’ve worked with you for a long time and I know you’re an honest, good worker. Really, I just wanted you to be ready for when it happens.”

As he struggled to keep his composure, Akahiko’s mind was filled with nothing but profanity. However, this was not directed at Nobuo for bringing him into a state of existential crisis; it was directed at himself. Looking back up, Akahiko’s attention was forcefully captured once again. This time, it was the company’s president, Nishiyama Orochi, who was just walking around the corner.

“What are you doing on company time?”

Nobuo immediately kowtowed as Orochi looked at him with a smug, one-sided grin.

“I’m sorry, boss! I will get back to work immediately!”

As soon as Nobuo returned to his chair, he was startled to notice that Akahiko had already returned to work at his characteristically breakneck pace. This time, though, something was different. Nobuo cracked a smile when he looked back at Akahiko. He noticed that while Akahiko’s eyes were open just as wide as they normally were, they were no longer empty. Nobuo knew Akahiko’s mind was racing, and he couldn’t wait to see where it would go.

However, Akahiko already knew what he was going to do. He had planned it since his childhood, he was just wrapping his mind around the timeframe of his actions. That night, Akahiko checked his balance on his phone. It seemed like it was high enough to fulfill his plans but only by a sliver. He smiled and went to sleep knowing that tomorrow would be a big day.

The next morning, after stopping by the bank, Akahiko drove into the countryside. The destination was a lemon farm. He knew he could fulfill his dream with this land: to operate a market stall selling gourmet lemonade. When he arrived, Akahiko approached the door. After a single knock, the door flew open, almost knocking him over.

“Welcome! Do you need anything?”

The homeowner, Oka Rei, was a brunette only four years younger than Akahiko. She had lived there for a while but always had a hard time keeping up the place by herself.

“It’s been a very long time since I’ve been here.”

“Have you come to pick the lemons before?”

Before he could finish his thought, Akahiko was interrupted by a warm cup of green tea being placed in front of him.

“No, thank you. It’s been a while since I’ve had polite company.”

“I imagine it gets lonely in the countryside.”

“It’s not so bad, I talk to plenty of people already selling lemons at the market… What brings you here?”

Rei twisted her hair with her index finger.

“Oh, I just left something here a very long time ago.”

“I’ve been living here for over 20 years and I don’t think I’ve seen you before. It really must have been a long time if you have the right place.”

“Yeah, I think you’d understand when you see it, though.”

“Where did you leave it?”

“It’s in the backyard around the lemon trees. Do you want to come with me?”

“I’ll follow you at a distance. I’m curious, but I don’t really know you yet.”

At this moment, Akahiko realized how sketchy the whole situation probably looked. He buried his face in his hands and let out a quick nervous laugh because he knew it would look worse before it looked better.

“Yeah, that’s understandable. Uhh… do you have a shovel?”

“Right outside the back door.”

Akahiko walked outside, followed at a distance by Rei. He counted 8 trees over and 5 back. Upon reaching the tree he was looking for, he took five paces north, and began to dig. Rei watched intently from behind a nearby tree as Akahiko produced a lunchbox from the ground. He turned toward her.

“This place is very familiar to me for a bit of a strange reason. It was my childhood home.”

“You mean your parents ran the orchard when it was still open to people?”

“That’s right, people would come to pick lemons and pay by the basket.”

They both stood silent as the wind gently brushed through the trees.

“Oh, you must be wondering what’s in this thing.”

Akahiko opened the lunchbox and produced a small pamphlet.

“This is a book of lemonade recipes I made as a child.”

“As a kid, I had practically unlimited amounts of time and lemons at my disposal. Because I had quite a discerning palate for a child back then, I decided to write a book of recipes.”

“I suppose it is, but I took it very seriously. I worked very hard on this.”

“How long did it take to write the whole thing?”

“It only took around two months. I was rather meticulous in my efforts for a child, but hey, there are only so many varieties of lemonade.”

“Well, I guess you could make lemonade with anything in it. For this book, I collected about 20 recipes, though.”

“What do you plan on using it for?”

“To be honest, I was planning on opening a stand selling lemonade, but I would need this land to do that.”

Without moving from his position, Akahiko nonchalantly reached up, picked a lemon, and held it toward Rei.

“If you’re interested, I’d be willing to buy the house from you as soon as possible. I even have a briefcase of cash in my car right now.”

Rei’s eyes widened. Akahiko realized that he may have been too forward, and tried to do a bit of damage control.

“I’m sorry if that was a bit sudden-”

“... but I can tell you’re serious about this. It takes some real balls to offer to buy someone’s house on the spot. If you help me clean the place up and make some profits with your lemonade, I’ll let you stay here.”

“That’s an interesting offer, but… wouldn’t people get the wrong idea with us living together?”

Akahiko paused to think for a second, sighed, and then extended his hand.

“Alright, but I won’t shake until I try some of these recipes. I don’t want to sell something I wouldn’t buy.”

Akahiko began to follow her back to her house.

“Fair enough, you can count on me.”

They each brought a basket of lemons into the house. Akahiko made samples of the recipes while Rei cleaned the house. Periodically, Akahiko got Rei to take a break and test a few recipes. Together, they tested each of the recipes for the rest of the day; while every recipe was unique and delicious, ten of the weakest or most difficult ones were removed. At the end of the day, the house was much cleaner, and a business deal had been arranged. Akahiko was about to go back home.

“Thanks for letting me do this.”

“Oh, no problem. This was a lot more interesting than what I would probably be doing today.”

Akahiko opened the front door, and his face immediately dropped. Looking at his car, he fell to his knees, unable to say anything. Rei joined him on the porch.

All Akahiko could do was shakily point at his car, which had its window broken.

“Oh my god. The briefcase…”

Rei panicked as she ran to the car. As the sun finished setting, Akahiko was left on the ground and everything seemed to fade away. 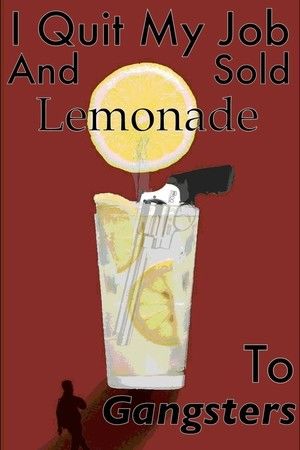 I Quit My Job and Sold Lemonade to Gangsters