The Moss on His Hair

The Moss and The Forever Unicorn

Maya Meyu hated life. She wanted pink hair but didn’t dare to rebel. She wanted to go on dating apps, but they were so shallow. There were many fish in the sea, or so they said, but there wasn’t one that was living and breathing that had ever caught her attention.

It was another Friday. Another bus ride home from college. Another walk down the busy street towards the apartment where she had lived since she was a baby. Her family was stuck between low and middle class, and her parents and younger sister looked forward to the day she’d pull them into the middle stratum.

She sighed and kicked the mossy rock blocking the long rectangular sewer opening right in front of her apartment complex.

She kicked it again.

Oh, a mossy rock spoke to her. Was she in heaven or what? She looked down, and narrow eyes stared at her from underneath the moss.

She jumped back and got into her karate pose.

“Are you serious, lady?” The dark eyes stared at her. Water dripped from his moss-colored hair.

“I dare you to kick me again.”

His neck and below were who knows where inside the sewer. A hand stretched out towards her. “Help me.”

“How did you get stuck?” she said and thought he was probably one of those dumb college kids.

She took his arms and pulled. She leaned close to the ground and pulled harder. It was like pulling a cow out of a backpack.

His butt escaped from the hole, and he crawled out. Maya let go of him, and he got up but staggered. His legs wobbled and slowly straightened.

“Thank you for not kicking me a third time.” He raised his brows. He turned back to the sewer opening and plunged his arm into it, which almost gave her a heart attack. She didn’t have time to save him a second time!

The pungent smell was becoming more evident. What would Maya say to her family when they smelled it? That she helped pull an idiot out of a sewer opening?

He pulled a bag out and smirked. “There you are.” He slung his bag over his shoulder and walked off without thanking her.

She did kick him in the head twice, but that was rude.

Near the gate of her apartment complex, Maya found a plant with wide and long leaves and wiped her wet hands, but, of course, the smell wouldn’t piss off.

Fortunately, when she arrived home, Mother was busy in the kitchen, and Father hadn’t come home yet. Her younger sister was also preoccupied with her new computer game, "Tonkatsu and Sauce.” She supposed it was some sort of cooking game or management-style game.

As they ate dinner, she and her sister facing each other, and Father and Mother facing each other, on that small square table they got from a garage sale some fifteen years ago, the weird moss guy appeared in her head. He wasn’t bad-looking, but he seemed to have a lousy personality. Not only that, but she could imagine him taking an anger-management class.

“How does getting a part-time job sound?” Mom said, looking at her with big eyes.

“Huh?” Maya squinted at her Mother.

Maya plopped the sausage into her mouth, and it tasted very bitter like her life. Time and time again, she was convinced that her mother didn’t care for her opinions at all. And her father never tried to stop his wife from controlling her every step.

It was Mom who had picked her major, her outfit, her hairstyle, her underwear, for goodness sake. This moment tonight made her want to dye her hair pastel pink and stick her tongue out at her mother.

“Okay,” Maya said, trying to make her mother tell her. Her mouth had to be itching to spoil it. Maya hated surprises, so she waited for her mother to spill it as they finished their dinner, but she never did!

So guess what? Maya couldn’t sleep that night. Her heart beat like a train engine going 70 miles an hour. Her chest was about to burst. She turned right and left, right and left, but there was no comfortable spot.

Morning came. She looked at herself in the mirror, her eyes as dead as a fossilized lizard. She took a deep breath and lay on her bed. It was 8 AM. Her mother hadn’t said anything; she hadn’t even heard a footstep out her bedroom door.

She closed her eyes.

“Maya!” The door flung open. “It’s time for work! Are you excited?” Her mother’s voice was like the buzzing of an unrelenting mosquito.

“Woohoo!” Maya shot up from her bed and slung her arms high. “I can’t wait to work.” She couldn’t wait to get it over and done with, honestly.

Her mother touched her long loose wavy bangs. “So messy. Very disastrous,” she said. “You look like a fossilized lizard with long black wavy hair.”

Maya laughed. She couldn’t stop laughing. She bent to the ground and beat the floor, out of breath.

And at that moment, she realized that lack of sleep might carry her through the day. This might turn out to be a good day.

She got up and changed into the white collared long-sleeved blouse and blue jeans her mother had arranged for her, then off she went with only her phone and a small bag to her new workplace.

On the map on her phone, the place was listed as “Verdantzz.” She tried and refreshed and rewrote the keywords, but there was no information about the place. None at all. 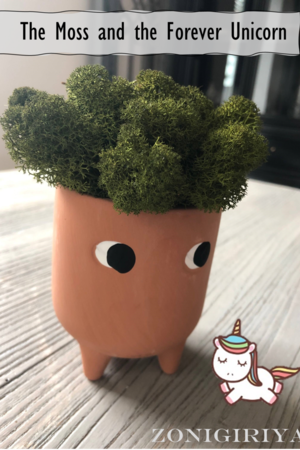 The Moss and The Forever Unicorn