The Fox and the Deer 2: A new journey to Babylon

The sun was shining bright in an ordinary afternoon, which will get very, very extraordinary. The fox was sleeping in its den. It suddenly woke up. The fox heard the birds singing. However, the birds were singing a different melody. And from what the fox remembered, they don't hunt here anymore since the fox took over this area. Then, the fox heard the birds talking.

"Let's try this fruit, it my heal the deer's leader", one of the birds said.

"The deer's leader?", the fox thought "What happened?"

The fox crawled out of its den.

"He-" the fox started to speak.

"Wait! I just want to talk" the fox shouted back as the birds flew into the sky.

"We re wot nalliwg lor lat lick! (We are not falling for that trick)" the birds shouted, their sounds muffled with all the berries in their mouths.

They flew away. The fox quickly followed them. Finally, the birds stopped. The fox hid behind a bush and observed what the birds did.

The birds waited. Then, a door opened.

"Welcome to the kingdom of deers" the same voice said, "We wish you a pleasant afternoon"

The birds flew inside the door. The fox dashed to the same spot where the birds stood.

The door reappeared. The fox wasted no time in running through the door. The fox knew that the deers would get scared if it appeared itself. So it crept along the walls until it saw a familiar face, the deer. This particular deer was its friend. It whispered to the deer.

The deer didn't seem to notice. The deer heard its voice certainly, but it thought that it was from the other deers. The fox thought quickly.

"What is the sentence that only them know?" the fox thought.

Then, the fox got an idea.

"My family will look for you, they will find you, and they will kill you" the fox whispered.

The deer suddenly stopped walking. The deer looked around.

The deer saw the fox. A delighted look came into the deer's face. As soon as the deer took a step, an alarm went off.

"Capture the fox!" a voice shouted.

Deers suddenly appeared ready to capture him, while others, ran.

The other deers looked confused.

"You're saying that this" a deer said looking at the fox with disgusted face trying to find the right word, "Dirty, filthy thief is your friend?"

The fox was released.

"Thanks" the fox thanked the deer.

"No problem" the deer replied, "What brought you here?"

"I heard that the deer's leader got poisoned"

"Uh-huh" the deer's face darkened, "He ate a nightshade by accident"

"Yes, the incurable poison from it is indeed in his body"

They reached a giant palace, the gate was opened. They walked inside the palace's corridor. After twists and turns, they reached a marble door decorated with the blazing gold and valuables.

"IMPOSSIBLE! There's no cure for the nightshade!" a voice inside the door said.

The door flung open when the deer opened it.

"How many times do I have to tell you? There is a cure", the deer said.

The room was full of deers. They were surrounding a bed, the deer's leader was sleeping in it.

"Absurdus (absurd in Latin)! The fruit from the tree of life of the hanging gardens of Babylon is a myth!" a deer said, "We have the best medics here, the leader would be cured in no time! Stop fooling around! Melior fuit ultimus princeps"

"He speaks Latin when he's angry", the deer told the fox.

"I know Latin, what does he mean by the last prince was better than this?" the fox asked the deer.

"I am the prince of this kingdom"

"Nice, but what's this about the fruit from the tree of life?"

"There is no such thing as the fruit from the tree of life of the hanging gardens of Babylon!" the doctor from before said.

"Proof it" the deer said.

"Well at least I won't believe that fairy tale!"

"Will you come with me?" the deer asked the fox.

As the fox and the deer walked away, the door closed. The two friends got prepared with supplies and headed off into the horizon that was lit by the blazing sun of the afternoon. As they walked into the dawn, at the other side of the world, in the ruins of the Babylon kingdom, there was movement from something big. That thing was the protector of the ruins and the secret hidden inside the kingdom... 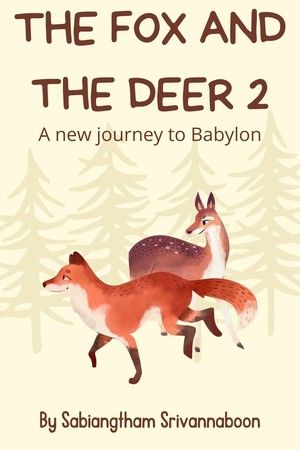 The Fox and the Deer 2: A new journey to Babylon