The Child Meets the Dog in the Fields of Red -- (1st_Reunion)

:: Dear Diary.....It’s been a while since we last talked. I apologize for being away so long. The last entry was the day my father suddenly left our home. He didn’t have anything to say, neither did he give a reason. I never understood why he left. He didn’t hurt mother, neither did they argued. He just disappeared. I wanted to share with you how I felt, but mother was beside herself. I thought best I devoted my time in caring for her in her time of grieving. It’s been 20 humans years since then. Now, I’m a big girl. I won’t cry anymore like I used to. I’m writing to you today, because I’ve made my first decision since I turned the age that humans called 17 years old (34 yrs). I will head out into the world as an adventurer, and find my father. I think both you and I, want to know why he left as alone. Right? ::

Once upon a time, in a fantasy world beyond our reach, timespace, and reality, there was this beautiful Elf Girl. As much as she looked like an elf - with knife-shaped pointed ears, elegant features, stunning long legs and fine pale skin - however she wasn’t exactly a High Elf. Neither was the she sub-breed of Wood, Moon, Sun, Night, or even Blood Elf.

No, she was a Half-Elf. Her mother a Human. Her father an Elf.

Today, after her 34th birthday, she thought she was old enough to venture out into the world to find some answers she had been waiting for the last 20 human years.

However, it hadn’t been one hour into her journey from home… when a pack of Dire Wolves tried to rape her.

“Nuwooooh! I-I’m sorry! I-I didn’t mean to hit you with my nose! I-it was an accident! An accident! Dah!”

“Hmm…I-it’s alright…I-I can tell you’re sincere… and you helped me to crush the Dire Wolves under your feet. Please, tell me what exactly are you? What is your name?”

“…Uuuuh. I don’t have a name. I only have a production number.”

“Th-then what is this number your speak off? Where are you from anyways?”

Somehow, on that fateful day when the Half-Elf Girl decided to brave the wilderness and attempt to triumph all obstacles to search for answers she longed to hear… she encountered a friend.

It took the form of this giant iron beast that sat in front of her feet while she had fallen on the ground. It was 1.30 meter talls, and 3 meters wide. From the tip of its head to the bottom its track-like toes, it was covered in nothing but steels, iron bars, and metal bolts. An odd creature with two long legs that resembled the body of a fat caterpillar, wiggling its entire mass in order to move across the ground.

To top it off, it had an iron nose of 3.0 meter long. For some reason, it was starting to wave up and down. As if it was frantic. To the Half-Elf girl's shock, the creature spoke in the voice of a small young boy.

“Um…Do-do you need help standing up? Here, you can grab my nose.”

“N-no. The people who use me have to shoot armor piercing shells every minute so my nose is used to being in rough shape. It’s okay, go ahead.”

"H-heh? U-Um. Big Sis, wh-what was that squishing sound? D-did you hear a whining too?"

"N-no! D-don't worry. Th-these Dire Wolves aren't my pets they... they attacked me, so you're in the right. I'm very grateful that you saved me. Er...You're very nice for a golem."

The creature truly was a Tank that had somehow transmigrated from the heart of the Second World War and had arrived in this new world of fantasy and magic. It lowered its 3 meter barrel down at a steep angle. Normally the gunner would never do such a thing, as the angle was only enough for him to shoot about 30 inches in front of its tank treads.

But it was enough to lower itself to the point where it reached down to the level of the Half-Elf Girl, who had fallen onto her round butt.

It was like offering a hand to help her stand.

"It's okay, Big Sis. I haven't used my nose to shoot at the Germans yet, so it's not super hot. It's perfectly safe!"

After a small hesitation, the Half-Elf Girl accepted the Tank's offer. With its hydraulics, it provided support for her shaking knees to help her to stand back to full height. It still kept itself at a lower enough angle, to act as a temporary railing for her in ace she still felt weak in her legs. Somehow, this action alone was enough to make her smile.

"H-heh? A-am I really that fat too you? Sob. Maybe because my mechanics were rushing to finish me so I could deploy, they didn't bother in shaving off my excess tonnage. Sob."

The Half-Elf Girl didn't know what a tank was, or what could it do. She wasn't from a world were war relied on bullets, artillery, and modernizing warfare. However, she could tell by the design alone that it was meant to be an intimidating craft that can crush over rocks, run over trees, and even hammer the true definition of fear into the hearts of its enemies...

...Or, run over a pack of Dire Wolves as if they were toads to a carriage's wheel. The track like legs were highly effective in crushing through the dense flesh and bones of the beasts that had ambushed the Half-Elf Girl. As much as it was a gruesome sight that made her stomach flip, she felt little to no remorse to the contorted face of the beasts that nearly violated her body.

“…Hey, hey. Who taught you how to fight, little golem?”

As if to show how upset it was from the thought, the T-34 Soviet Tank lowered its barrel. A child sagging his shoulders.

Not sure how to best comfort this iron behemoth, the Half-Elf reached out a hand to pat it on the front of the armor. The barrel lifted up a big, it’s spirits raised.

“B-but, I’m glad you’re okay, Big Sister. I heard you calling for help an-and I quickly came over. S-sorry about making a mess though.”

“N-no. It’s not that… There was a group of adventurers around my age who came across me when I was running away from the Dire Wolves. When the beast pounced on me and tried to violate me, I called for them to help me… I didn't expect them to turn a blind eye to me. I think their rogue even tried to steal my bag, but the Dire Wolves scared him off with his friends.. Yet, it was a golem like you who came to my rescue. I'm very grateful for what you've done for me."

“Phew. I’m glad Big Sis is alright. I was really scared. After the scary stuff in Stalingrad, I really don't want any more innocent people to die. I want to protect them!"

“Like I said, I don’t think I’m a golem. People keep calling me a beast, but I think the right word is Tank.”

“…Tank…That’s an strange sound. Is that your name?”

“I don’t want it to be my name. It sounds like something you would call a German Shephard... Uuuh. German Tanks are scary, e-especially the Tiger ones. They're very mean when they see you. I-I don't want a scary name."

The Half-Elf girl touched her chin, not at all noticing the blood splattered from the crushing of the Dire Wolves on her hands and cheeks. After giving it a thorough thought, she tapped a small fist into her red-stained hand.

“I know! How about, Nello. Would you like that as a name?”

The T-34 Tank dipped its nose down, as if to get a better look at her. It was exactly how one's grandfather would look over their glasses to look at your properly.

"Wh-what? I-is something the matter? D-did I spoke to fast for you to hear?"

In commemoration of their new union (reunion, the beautiful Half-Elf Girl sealed their friendship with a lovely drop kick in between the Soviet Tank's caterpillar tracks. The sound of toes popping echoed in the small forest of this brand new world.

“GUBYAAAGGH! N-NOT THERE, BIG SIS! TH-THAT’S WHERE THE GERMAN TIGER TANK PUNCHED ME WITH HER HIGH IMPACT SHELL BEFORE I CAME HERE! I-IT STILL HURTS!”

"DON'T MAKE FUN OF MY NAME! EVEN NOW, I STILL DON'T UNDERSTAND WHY MOTHER GAVE THAT'S DIFFICULT TO PRONOUNCE WITHOUT BITING MY TONGUE! I WAS A LAUGHING STOCK DURING MY ENTIRE ELEMENTARY YEAAAAAAAAAR!"

And so begins the reincarnation story of A Dog of Flanders in a fantasy setting. Feel free to laugh (don’t cry). 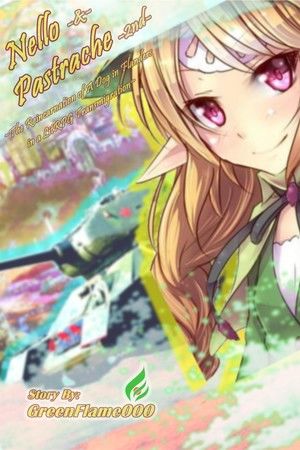