A New Light In Interria

I still remember that day.
"It's..ok.., everything..is...fine." She said that as blood spilled out from her mouth and the iron bar pierced through her spine.
Before everything in front of me, my past self could only cry out for help in desperate. Every night, I always ask questions like "If I didn't ask to go there that day, what if I...".
"But...but.." he stuttered as tears dripped from my eyes mixed with all the blood on the ground.
"You...must..live..on, you must &@#%."
I always blamed myself for not being able to remember those words. But how could the brain of an 8-year-old boy bear at such a sight? When the smoke cleared, my mother took her last breath, at that time my past self could only kneel and cry in vain. Suddenly, it turned its head to look at me.
"Wake up." It shouted in anger.
What?
"WAKE UP."
I opened my eyes after what seemed like an eternity. I found myself covered with well-dressed wounds. On my mouth was a breathing tube and next to me was a machine that seemed to be making a high-pitched squealing sound as if to wake me up. I looked at the nearby calendar, today is ZZ/YY/20XX about 3 days since my recent accident.
"H..o..." Damn, now I can't even talk.
I wanted to get up, but I knew that after getting up I would experience a series of pains that spread throughout my body. But I'm sure that pain will never as equal...
"Doctor, is my baby okay ?"
Her. The clinic door opened. I closed my eyes and pretended to be asleep.
"He suffered serious injuries after that traffic accident. However, now that he is out of danger, we just have to wait for him to recover."
"He's out of danger... Oh my god, thank you doctor for saving my baby."
"It's okay that's what a doctor should do. And what's more, it looks like these injuries will follow him for the rest of his life. It is unlikely that it is completely treatable."
"Don't worry, my boy. I'll make the other driver pay the fine he deserves. Doctor, can I have some alone time with him ?"
"Of course."
After saying that, the doctor left. After a few minutes of silence, she decided to break the atmosphere by coming closer to me and whispering.
"Didn't expect a bug like you to survive that accident."
She could finally let go of that deceitful face. With a charming face and hot body surrounded by the most expensive black flames, it is possible that she could have won an Oscar if she entered the acting industry. I would also have hit her scheme if I hadn't known her first. No need to guess that you were the mastermind behind that accident, stepmother. Anyway, this isn't the first time she's admitted me to the hospital and it certainly won't be the last.
"Work, work, I have work to do,... That damn old man has been blabbering all day with those words since the day I came to be your stepmother in place of your dead mother. The woman who died in an accident 10 years ago because of you."
Since then, I have closed my eyes in silence. My blood boils but I can only stare at her with my eyes wide open because even if I want to tell her to stop, I can only resent a few meaningless words.
"Finally. I know you've regained consciousness since the conversation with the doctor."
Then she squeezed the wound under my right thigh. It hurt but still nothing compared to what she had done all these years.
"Hmm, even bedridden can still bear the pain, what a nasty hitter. Feeling so helpless and desperate isn't it like when your mother reached out to save you that day. Then you live on to be an idiot who saves people with your fists and causes trouble, not inheriting your father's inheritance. If she knew what your future would be, then she would have abandoned you by then." She said that as she squeezed the wound even harder.
DON'T YOU DARE SAID ANOTHER WORD ABOUT IT.
"From the moment I saw your face when someone called for help, I knew you weren't a good thing. We all want to satisfy our innermost desires and are willing to do things that are not right. Although I don't like your mother very much, your mother and I both want the best for our children, and in order to do that, his father's beloved son must disappear."
...
"Next time I hope you won't go to the hospital and go straight to the morgue. Goodbye."
Saying that she quietly walked out of the clinic and started to shed crocodile tears. After she came out of the clinic, I looked directly at the wall above me and thought, "Is she right?".
[Then why don't you prove it to me?]
I looked around startled. Nothing. Have I gone crazy?
[No, you're not crazy. I was just joking with you.]
I shivered and looked up at the ceiling. A dark thick fog appeared and with that, a faceless black figure floated out from it.
[You have finally seen me.] That thing giggled in excitement as I gazed upon it in terror.
[Now let's talk, shall we.] In the blink of an eye, the thing snapped its right hand.
I feel light all over. My soul was injected from my weak body. Bookmark here 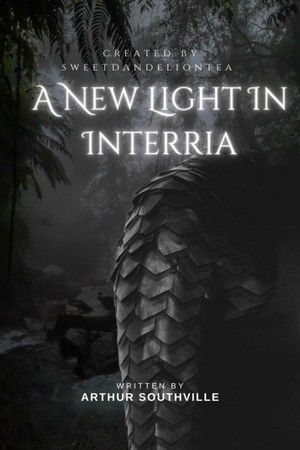 A New Light In Interria