Every night, Diluc Ragnvindr is forced to watch his adoptive brother drink himself silly.

Not too silly; Kaeya Alberich is a tight-lipped individual, lashing at his victims with a tongue so silver that even prudes would slip into bed with him. No—such a mysterious man could not afford to drink himself to a state of near-death. He would lose his allure.

You’re not as sly as you think you are, Kaeya, Diluc thinks. He slips a moist washcloth into his glass and swirls. Though he has not sustained a proper conversation with the Cavalry Captain in five years, he knows the man inside out. More than he would like to admit.

Diluc watches Kaeya slip his hand around the waist of another man, and then his first woman for the night. The Captain’s voice is low, loose, raspy, and for some reason unbeknownst to Diluc, he cannot tear his attention away from their conversation.

Thank the Archons that—well, Venti is here. Quite literally as well.

The young bard waves a hand in front of Diluc’s face. “I know we’ve all got a crush on Kaeya, but you’re still on the clock, Diluc.”

“You are projecting.” Diluc sets the glass aside.

Diluc scowls and begins to mix. The night is young, and he knows that Barbatos—the Archon of Freedom, sex, and getting seriously hungover on a weekday morning—is not quite finished with drowning his internal organs in liquor just yet.

When Diluc is done with the cocktail, Venti reaches over the counter and downs the mixture in one gulp. He wipes at the corners of his mouth with his sleeve. “Another.”

Diluc does as he says. With Venti, it’s always another. Another. Today is not a good day for conversation—the younger bartender suspects something has happened.

In complete silence, Diluc mixes the drinks until his hands begin to shake and his wrists begin to ache. He watches Kaeya Alberich grope another man’s ass, and Diluc shudders—whether it is out of disgust or something else, he does not know. All he knows is that it has always been Kaeya, Kaeya, Kaeya, ever since the man had betrayed the Ragnvindr family name and forsaken Diluc for another world beyond his understanding.

Venti stays at the Angel’s share long after Kaeya has left. Long after everyone else, in fact, has left.

“How you manage to live through all of that alcohol, I’ve not a clue,” Diluc mutters.

“I’ve been drinking myself silly for three millennia.” Venti snorts.

“How is your liver still intact?” he asks.

Diluc attempts to dry off the insides of another glass, but the night’s work has not been kind to him—his wrist aches, and suddenly, the glass is on the floor. In a thousand, indistinguishable pieces.

Venti hops over the counter and begins helping him pick up the glass pieces. “The young master of the Dawn Winery really shouldn’t have to work this late,” muses the bard. “The Angel’s Share sure is short staffed, isn’t it?”

“No, it isn’t.” Diluc thinks about swatting Venti away, but his hands just hurt so much. “I just thought it was more proper for a winery tycoon to know a little more about the industry.”

“And then you’ll sleep the day away, wake up at three in the afternoon, and then head back to work?”

Venti’s eyes—bright jade, like the light that streams through the edges of a leaf—meet Diluc’s. “You and I both know that you’re not going to sleep,” he says.

At this, Diluc is silent. Kaeya isn’t the only one in Mondstat who knows why the young tycoon is always aloof, always distant. Underneath his sleeves are cords of muscle, and his hands are blistered from years of sword training. During the day, he dons a mask and fights the hoards of hilichurls that occasionally make it past Mondstat’s underwhelming defences.

“The Knights of Favonius are useless,” Diluc spits. “I’d rather get the job done myself—and besides, it relieves stress.”

“You’re working at a bar. What did you expect?”

As Venti takes care of the shards, Diluc ruminates on his words. He knows what he’d expected; he’d expected people to sit down, shut up, and down their drinks and go. Instead they’d asked for more rounds, more drinks, more talk. Sometimes they even badger Diluc to drink with them, to which he replies despondently with a flat “no.”

He’d expected Kaeya to continue frequenting the Cat Paw’s—a rival bar from across the street—and not visit him instead on his days on the clock. And by “visit” him, he actually means “fondle the asses of men and women and make Diluc Ragnvindr watch.” The Cavalry Captain is a menace.

And yet, so is the Anemo archon, god of freedom and fornication, apparently.

Venti dusts off his hands and faces Diluc.

Diluc knows this look. He’s seen it on Kaeya.

“Are you going to leave?” he asks, but he is not entirely there. His face feels as if it is glowing, and his hands are even more shakier than usual. “I need to close the bar.”

Venti closes the distance between himself and Diluc, and suddenly his lips, his pearl-white fingers are on his. When he draws back slightly, his breath warms Diluc’s lips, heats him from the inside out like a hot wind.

“Do it, Ragnvindr,” Venti whispers. He smells of dandelion wine and a fresh sea—Diluc can’t help but close his eyes. “Pretend I’m Kaeya, just for tonight.”

To that, the Dark Knight Hero of Mondstat grabs the Ameno Archon by the collar—

—and kisses him deeply back. 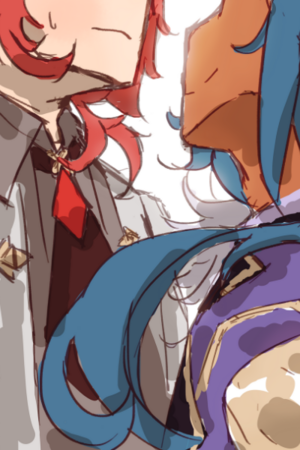