The monitor was the color of the sky at noon, albeit with an error message scrawled across the heavens. Frank did what any half-literate person would have done in such a situation: he slapped the side of the screen and hoped for the best. The unchanging screen made him reconsider his approach. He read the message written in a white monospace font:Bookmark here

A corruption has been detected on your system. Please restart your device and I'll try to fix the problem.Bookmark here

Below that, in a decidedly different font, almost handwritten, it read:Bookmark here

If all else fails, call Cammy the Fixer.Bookmark here

Frank reached behind the monitor and felt around for the reset button. He held it for a few seconds, and the blue screen faded to black. After a moment, a white blinking cursor appeared on the screen. Like always, the BIOS boot screen appeared:Bookmark here

This screen was soon replaced by another:
Bookmark here

Frank tapped his fingers on the wall as he watched the percentage creep up to 100. Along the way, some warnings appeared, indicating that some files were unrecoverable, and would therefore attempt to be restored from the latest cloud backup once the network card was back online.Bookmark here

Once this was done, the familiar Bandix login screen appeared. Frank tapped his wrist against the screen, and the login screen faded away into his normal home screen. A notification in the corner indicated that it was working to restore lost files. Frank breathed a sigh of relief to see the familiar background, some picture drawn by Gloria. He wasn't sure what it was, but it was beautiful in its own way. Another notification popped up in the corner of the screen. He clicked it.Bookmark here

His eyes shot wide open at what he saw. "What?" he said. It was a notification from Boxter, the office agent. He sent the latest update on the sales numbers for the Taskrotta launch. Frank couldn't believe what he was seeing. He dragged Boxter's feed into StreamRX to visualize the numbers. After a moment, the numbers turned to pretty graphs. He stepped back and admired the picture, almost as beautiful as Gloria's, in its own way. The part he found most intriguing was the line representing revenue, and its speedy climb toward the top right of the graph. He nodded, watching the numbers climb.Bookmark here

He slid his forefingers across the back of his left hand. "Call Conor," he said into his wrist.Bookmark here

"This is Conor," said Conor. The phone screen on the wall showed Conor's face as he talked.Bookmark here

The face on the screen looked down while Frank could hear Conor typing something onto his keyboard. Frank saw the glow the screen reflected back off of Conor's projected face. His eyes grew huge. "Dinzai!" he said.Bookmark here

"I know," said Frank. "We're going to be rich."Bookmark here

"This can't be right," said Conor. "Are the fabs even able to keep up with this many orders? There's over a million in the past 30 minutes."Bookmark here

"The fabs should scale with demand. We pay a little extra for more fabs, but this will more than offset the additional cost."Bookmark here

"You can say that again," said Conor.Bookmark here

"I've already said it twice," said Frank. The back of his hand began to glow with an orange, pulsing light. He looked down at it. "Hey, Con," he said. "I gotta go. I need to get the rest of my steps in before cron."Bookmark here

"See you tomorrow," said Frank. "Rolling in a big pile of nameros."Bookmark here

"As long as it's a different pile than yours," said Conor.Bookmark here

Frank double-tapped his earlobe, ending the call. He took one more look at the graph, and couldn't help but smile at the prospect of being rich. He looked around his apartment, wondering if he should renovate or just get a new one. He couldn't wait to tell Gloria in the morning.Bookmark here

The sound of something tapping broke him out of his daydream. He looked over to the window. Between the glass and the massive neon expanse that was the city beyond, a small drone hovered right in front of his window, tap, tap, tapping the window with its nosecone. He stepped up to the window. It was hard to see it quite clearly through the darkness of the evening or the rain splattering on the glass. By the light of a passing aircar, though, he saw it clearly. It was a Taskrotta, the little squirrel logo (also drawn by Gloria) printed along its side.Bookmark here

Frank leaned down to meet the drone eye to eye, in a manner of speaking. "It's nice to see you hard at work, little guy," he said. "But I don't think that tapping at my window is what your new owner wants you to do." He made a mental note to meet with Syd tomorrow to look out for any reports of "distracted" drones. He heard more tapping. From a different place at his window was another Taskrotta. Then another, and another, and soon, dozens of Taskrottas sat at his window, tapping on the glass. He took a step back. "What's going on?" he said.Bookmark here

Between the cloud that tapped his window, an array of Taskrottas rose from below carrying a lasertorch between them. They fired it up and began to cut a perfect circle in the glass. The circle was no larger than a decinam, but it still concerned Frank.Bookmark here

Another array of Taskrottas arose into view. This time, they carried a gas canister no bigger than a pony bottle. One Taskrotta stuck the hose end to the hole in the window, sealing the suckerplug. Another one released the valve on the bottle. A faint green gas began to seep into the room.Bookmark here

"What?" said Frank. He backed even further from the window, stepping back from the slowly growing cloud of green gas. He ran to the computer against his wall. He swiped away the StreamRx display and brought up the Geomys admin tool that Syd had written prior to the Taskrotta launch. He hit the emergency overrides menu button. Every few seconds he looked back at the cloud of green, trying to judge the distance between him and it. At the bottom of the emergency overrides screen was a big red button. The text said, "Terminate all Taskrottas." He just about stuck his finger through the screen tapping it. Another prompt asked him if he was sure, as it would result in a full refund of all disabled units. He clicked the OK button. He looked toward the window once more. As one, the drones dropped from the sky, falling out of view of the window. However, the pony bottle still dangled there, stuck to the window with the suckerplug, still shooting out the green gas. The cloud grew larger and larger with each passing breath.Bookmark here

He ran to the door of his apartment. It was locked. He pounded on it, but couldn't get it opened. The green gas kept seeping into the room. He thought about throwing a chair against the door or windows, but one look at his particle-polymer furniture told him that it would do more damage to an overpriced chair than it would to anything else. He took a few breaths, then stopped, remembering the gas. Bookmark here

It looked deadly. It looked dangerous. He had a feeling that he was done for. Enough of that gas in the lungs would mean no more Frank. He didn't like this idea. Then he got another one. It was the only thing he could do, really.Bookmark here

He ran to his closet. Behind a box of batteries and a couple of tennis rackets was a blank white box the size of his head. In a glossy print along the side, it said LifeBack. A red tab stuck out of the side. He pulled it.Bookmark here

An LCD screen lit up. "Please verify that you authorize the transfer of Ꞥ100,000 immediately to the LifeBack corporation." He tapped the confirmation button. Two wires dropped out of the bottom of the box. They had magnetized leads. He stuck one behind his ear and the other to the back of his wrist. The LCD screen cleared, being replaced by a pixelated face that smiled at him. In a heavily synthesized voice, it told him about the process of backing up his brain.Bookmark here

"Welcome to LifeBack Emergency Backup Kit. It looks like you're about to create your first backup. Are you ready to begin?"Bookmark here

He tapped the Yes button.Bookmark here

The device beeped. "First, we will entangle your consciousness. This part may make you feel slightly disoriented, so I would recommend finding a place to sit." The face was replaced by a spinner and a progress bar. The bar began to slowly fill up. While it filled, Frank felt a sort of buzzing in his head. He blinked a few times. After a few blinks, he no longer just saw the LifeBack box, but also saw himself looking back at himself through the LifeBack box's onboard camera. The device dinged. "Entanglement complete," it said. "Next, we will back up the long-term memory."Bookmark here

The device showed another progress bar. Seeing himself looking back at himself made him feel dizzy. He tried to distract himself from this by watching all his memories load into the box, his life literally flashing before his eyes. He glanced back at the green gas. It was less visible, but that meant that it was getting more and more dissipated throughout his apartment. He looked back at the LifeBack box, worried.Bookmark here

"Come on," he said, giving it a little shake.Bookmark here

"Please be patient," the box said. "This process can take several minutes, depending on the user's age or life experiences."Bookmark here

Frank stepped further from the window, carrying the box with him. He took turns wiping each hand on his sleeve, removing the sweat that was beginning to accumulate there.Bookmark here

"It is recommended that you stay calm during the entire procedure," said the device. "High levels of stress may have unexpected results."Bookmark here

The progress bar made it to the 80s, 90s, then ticked slowly toward the end. Frank let out a sigh of relief watching it go from 98% to 99%. He caught his breath though, as it lingered there a little too long for his liking. Bookmark here

"What's going on?" he said. He sucked in a breath. It tasted minty. He looked up and around the room. All around him was green. The gas had filled his home, and was now filling his lungs. He began to cough. He felt a strange burning deep in his chest. He could only imagine what would happen to him next. However, he never did imagine anything more than just a brief flash of terror or agony, as just then, every muscle in his body suddenly contracted. The cables popped off their contacts on his body, and he fell to the ground, still and dead as a stone.Bookmark here

"Corruption detected," said the device. "Would you like to continue from the last good configuration, or start over?" The light from Frank's wrist went from orange to red. The device repeated its message several more times to an otherwise empty room before going into sleep mode.
Bookmark here 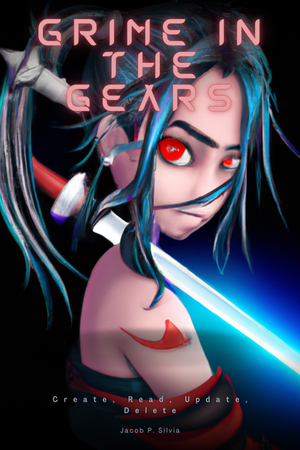