The Past: Absence And Estrangement

The era of knowledge is blinder than the era of mystery. The vast continent of Ardaenor was engulfed in chaos again. The sound of cannon explosions boomed as loud as a meteor strike. The soldiers were forced to shed blood, and the blood of war killed the love of the next era. The Great King of Atria tore up the peace treaty, killed their envoys, and shouted his war cry against his two old rival kingdoms. Years of war that continued the struggle of the dead, depleted ammunition until the kingdom's supplies ran low. Their conflict spread to various remote village branches and implemented a system of forced cultivation.

One of the victims of their war is Nightville, a row of slum villages located at the end of the borders of the Atria Kingdom. This junk village cannot be described in words but through experience. If you pass through Nightville and can't die, then you're immune to the plague. Don't be flashy, because one gold coin is still being fought over by the whole village. Lastly, it's only a matter of time before the village will disappear from the Runeverse world map. However, the last few nights, there was a buzzing rumor about a magical boy who was often called the Witching Night Boy. It is said that in the night, there is a supernatural event in which a boy spirit steals treasure from the glorious kingdom of Atria and divides it among the poor people of Nightville. No one knows where the boy came from, but he often appears at night.

Nightville is arguably one of the most neglected places between forest and mountains. Not far away were the black mountains of Gronoa which stared intensely at the village and carried a chill. Last year, the monsters' attacks from the mountains nearly wiped out the village, and since then, the village is still standing today without being bothered by monsters other than soldiers and wars. Judging from the poverty, it was impossible for them to hire hunters or adventurers to help. No one knows what keeps this junk village alive. It's still a big question mark...

From the experience of caravans visiting the village, it always gives a negative impression. The first is theft, they know how the trade in this area works. Drink with someone in the evening, and check if he robs or not in the morning. In addition to the infamous theft, this dying slum has also become a hotbed of disease that even visitors can't bear to stay for two days. That's why most of them left after a day like someone had planned the whole thing, strange.

The next day, the Atria troops gathered all the villagers and interrogated them. For those who resisted, the soldiers did not hesitate to give punishments in the form of twenty lashes or worse, the death penalty on the spot. The soldiers inquired about the suddenly missing royal supplies and the hidden identity of the Witching Night Boy, but the villagers unanimously stated that they knew nothing.

"Forgive us, maybe the ones who stole the supplies were mountain bandits," said one of the villagers.

The Atria soldiers blew a fuse. The reason is, that the trade route that the royal wagons use always crosses Nightville, and the last few nights, the cargo has been snatched by someone. No one knew if it was a bandit or not, but one of the soldiers had seen the thief vaguely like a Hobbit. A figure with a small and agile body. They investigated the villagers' housing one by one by force.

"But lord soldier, we have nothing left…"

"Shut up! It's better than losing your life."

The Kingdom of Atria represents the Black Hydra. One of the Independent kingdoms that are trying to fight against the Empire. The King was furious because these days the royal supplies were always stolen, whether bandits, pirates or whoever it was. Atria troops are armored in jet black with the Black Hydra's crest on the chest. The helmet is in the shape of a T that doesn't cover the eyes, nose, and mouth.

After tracing the outskirts of the slums, they found no sign of a supply storage area. At the end of the dead-end, there was a beggar boy in shabby clothes and a hat, begging for gold pieces. It's said in Nightville, that if anyone really wants to know something, ask the beggars. They have eyes and ears all over the village. They know all the little secrets of the daily life of the villagers.

A lieutenant soldier came to scold the boy, “Hey, boy! Why are you here? The people should gather in the front!”

"Sorry Sir, but I just found out that today is raid time. If there's something you want to find, just ask the caravan at the end of the village."

"Not gonna happen! I need information, not motivation! You better tell us the location of the supplies or this village will suffer the consequences!”

The soldier's face was boiling and hot, he was sure this villager had snatched something precious from him. Especially seeing a little boy who knew nothing about the world staring at him like that. A pitiful but proud little beggar, the soldier wanted so badly to make him cry to feel the cruelty of Runeverse.

"I'm sorry, I don't know what you're saying. Since yesterday, I’ve been a beggar just like now."

The soldier snatched a box containing gold pieces from the little beggar. However, his grinning face turned aghast when he saw the boy just smiling. A meaningful smile that says it all. When we see a resigned person or boy smiling like that, we know there is something fishy here, regarding the strangeness of the village.

"Why are you even smiling kid? Aren't you sad to lose your treasure?"

"Not at all. Those are the gold pieces I've been collecting for a month, you may take them."

The lieutenant was stunned by the boy's sincerity. This was the first time he heard noble words from a boy that pierced his heart, especially in the area of thieves. To a soldier, he must remember this rare occurrence more than the many battles.

“What if you starve to death? Runeverse is too cruel for a kid like you, huh?”

"It's all right," answered the boy with a genuine face. "This world is only temporary, the real life is in the hereafter."

Again, his powerful words that resonated with the soul coupled with his stunning modesty, made no one want to wipe the genuine happiness from this boy's face. His actions were commendable, and his simplicity of heart was on a different level. Other soldiers began arriving from around the corner, finding nothing in their empty hands.

“Lieutenant Jack! Have you looked for it there?”

Lieutenant Jack returned the boy's treasure box, then walked away, "No! There is nothing here...!"

On the bustling streets of Nightville, the Atria troops were dissatisfied with the villagers' answers. They started punishing them with twenty lashes one by one as a form of irritation. The soldiers didn’t want to leave the slum empty-handed, so they demanded that the villagers must provide concrete information next time.

The youths groaned in pain, and the elders and children wept in fear. If this continues, the number of deaths will increase, and this village will end. Hearing the noisy cries of the villagers, Lieutenant Jack decided to order them to give one person they wanted to sacrifice for his anger.

"Don't argue! It's better than us destroying your village! Quickly choose! One victim, young or old, it's up to you!"

At that time, their minds squirmed with restlessness. Knowing this is the end of everything that greets upset, there is no answer from them. What is the meaning of life if such continues? Better to die together and fight for the village. However, a black-haired beggar boy closed the silence by daring to come forward, "I do!" he agreed.

"You?! A beggar boy from earlier?”

"Yes. Since I don't want to suffer any longer, I don't mind if fate takes my life sooner.”

Again, the beggar boy's actions made their hearts touch and pound. Such a small child is willing to sacrifice himself for the sake of a dying village that could be destroyed at any time due to war. Unfortunately, there is no award that the boy got but punishment. This was the biggest test for him in his life in Runeverse.

Lieutenant Jack disarms the boy and takes him somewhere. Residents of the slums mourned the boy's sacrifice. For the boy, his mission was now complete, with no regrets, no suffering, no memories. His duty in this world was only to bear the pain in their chests, even the sun could not warm him anymore. His back carved a long story that had ended.

Tears seemed to boil, their sympathy and inclination of their hearts burned with the heat of the sun that accompanied his departure, erasing his traces, as if telling them not to look this way. The only thing left for them was his tattered hat that had fallen off. Unbeknownst to the boy, this might be the last time he would see the light in the Nightville. 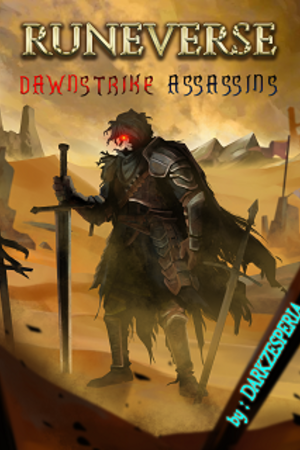