The Power of Inspiration

Another night, another dream about her…Bookmark here

It was the third night in a row, and Elise can’t stop thinking about her.Bookmark here

Her short, ocean blue-dyed hair, beautiful equally blues that shined in those dingy gym lights, and don’t forget her absolutely ripped body. It was like a gift from the almighty, his fingers carefully crafting each abdominal, each vain made her tanned body an absolute treat to study for the big art contest. Bookmark here

The only problem is…Bookmark here

She doesn’t know that Elise is studying her. Yet. Bookmark here

Elise Hart was woken by an alarm clock on her phone. She got up and silenced it after fixing her blonde hair. She always loved to wear blouses to bed, it made her feel older and like some noblewoman who’s on the way to making important choices about her perfect kingdom. In reality, she was getting up to head to work as a clerk at the local gym Al’s Gain Getter. She spun excitedly to the bathroom brushed her teeth, fixed her long golden locks, and adjusted her black, thick-rimmed glasses. She got a good look at herself as she put on her work polo, exposing herself to her chestnut eyes and the ponytail she fixed up. She panted as thoughts rushed through her nervous brain. Bookmark here

Elise, You’ve been a complete weirdo for far too long! You can’t keep dreaming about that girl, writing crappy drawings, and peeking at her while you’re on break! We get it, you’re gay! Now get some self-respect and TALK TO HER!Bookmark here

She grabbed her items and left her lonely apartment, heading into the blazing heat of Amor, Florida. Bookmark here

The city of Amor was full of older people attempting to retire next to the scenic beaches and cool year-round temperatures, with the only exception being July when it’s hitting triple digits every day. Today was one of those days.Bookmark here

Elise worked every weekday from 12-9 and took breaks on the weekends. She walked into the gym while her coworker, a man named Kar, was sitting next to a fan desk while idly reading a magazine about the upcoming manga he was planning on reading. The dark-haired man put it down when he saw the woman basically skip to the back. “Let me guess,” He started while getting a whiff of her perfume. She smelled of strawberry. “You’re saying you’re gonna nut up and talk to the toughest in the gym but you’re gonna cry in the bathroom. Again.”Bookmark here

Elise hit Kar on the shoulder. “Shut up. Don’t you have to go soon? Get up, nerd.”Bookmark here

Kar fixed his shaggy hair to reveal more of his dark brown eyes and a cocky smile. “First of all, you draw, don’t talk to me about nerds. Second of all, You’re early. Check the time.”Bookmark here

She did so, seeing it was only 11:45. She rolled her eyes, she just realized in her excitement she rushed over here. The woman usually comes around this time and is here basically all day, only leaving an hour before close. Elise ignored Kar’s taunting and checked the spot she usually works out at. Not there. She’s late, odd. Bookmark here

Elise sat next to Kar, talking about manga for a bit. After a bit, he changed the subject. “Oh yeah, did you ever send something for that contest?”Bookmark here

She slowly shook her head in response. “I haven’t found anything good enough.” The great Florida art contest they host every summer is out again. Every year, thousands of artists from across the state send in their pieces to win the 5 thousand dollar prize. Elise could really need that money, considering she’s been stuck here at the gym for the past year. I mean, as long as the blue-haired muscle goddess is here…Bookmark here

Kar leaned in. “You got all summer, don’t rush yourself. Just think about what you like most. I’m sure you’ve been practicing.”Bookmark here

The blonde nodded. “Duh. I’ve been drawing mus-I mean flowers!” Her face flushed a light red as the male laughed at her embarrassment Bookmark here

“Don’t you tell me…You’ve been drawing the girl? I gotta see what her name is because she can’t be this hot.”Bookmark here

A humiliated Elise saw the time. Noon, good. She rushed over before he could type a name in to get him out of the seat. “Clock out, nosy.” Good. She was far too nervous to know of a name right now. Bookmark here

For the next hour, Hart found herself sketching for the contest. All her mind could picture was the chiseled tanned abs of a certain frequent gym member. She could picture those thin lips curving into a smirk. Her beautiful aqua hair barely went past her ears. For some reason, she thought of the heat she might’ve been bringing off. Elise hated that she was so scared, so inferior compared to that mountain of a woman. She was taller than most men, she had to be 5’11” or taller. Bookmark here

Her sweet fantasy was interpreted by the blue-haired demi-god herself. “...Hello? You good there, chief?” She awkwardly laughed. Her voice had slight deepness but was still very cute to listen to.”I was just wondering if I can check the day I have to pay for my membership? My name is Suzi Walters.” Suzi was wearing an all-black tracksuit, which explained why she was sweating already before even working out. She looked down with slight amusement to see the worker scramble to put her notebook away and get on her computer. Suzi saw a glimpse of what she drew. Bookmark here

Elise was a blushing mess, flustered and mad at herself for getting distracted this easily.”Y-you have Un-Until August 20th…Ma’am.” The blonde’s face was red hot. Usually, Suzi just walks past her, knowing the gym like the back of her hand. Bookmark here

Suzi leaned in. “Cool, thanks.” She winked and walked away. To Suzi, it was a simple gesture to be playful.Bookmark here

For the rest of the day, all Elise could think about was the wink. Does she like her? Does she want to kiss her? Touch her?? Marry her??? God, I hate emotions, she thought as she couldn’t help but study Suzi pump iron. What she wouldn’t do to get one time to be in her arms, hearing that soothing voice as she was coddled.Bookmark here

The night came, and it was near closing time. Elise walked the halls, the bathrooms, and the showers to see if everyone left. It was just Suzi, getting her tracksuit on. Elise nervously approached her, waiting for her to leave. Instead, Suzi turned to the shorter woman and pointed at her. “You’re an artist, ain’t you?”Bookmark here

“I could be tripping but…that drawing earlier…Was that me?”Bookmark here 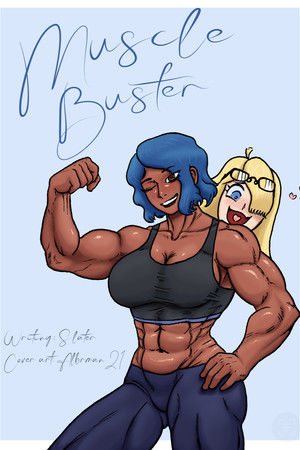