Being A Mage Is Boring, So I Created A Class For Myself

“Rio, get ready. It’s time.” Boss hurried me. "We can't afford to waste this chance."

My breath felt heavy as I moved fast to position myself as planned. A drop of cold sweat dribbled along my cheek, down to my jaw, prompting my hand to move on its own. I tried my best to focus and listen closely to every command. Everything depended on me now. I couldn’t let anything break my concentration, not even this immense urge to scratch off my skin. I stopped my hand.

If only I weren’t a stupid mage.

To be honest, our odds were pretty good. Of the opposing team, only the assassin remained on the field, while four of us were still standing. But on a battlefield, you would never know what could happen. Although it seemed very unlikely, even one guy could kill all the enemies utilizing specific tactics.

“I’m still tailing him.” Lynx's abrupt deep voice surprised me, making me gasp. Did I concentrate too hard? He continued, “He is about 15 meters ahead of me and 100 meters away from the designated area.”

Lynx chased the opponent through the jungle on my left. As an assassin himself, only he could keep up with the enemy assassin at that speed.

“Okay, Rio and I are ready here,” Boss replied. He waited at the planned location, hiding behind a bush about 30 meters away to my north. He would try to clash with the enemy from the front and Lynx from the back.

“Ah guys, he is trying to move left,” Lynx informed us immediately.

“No, he isn’t.” A sweet yet sharp voice rang out through the voice call.

Right away, a round of white lights, which still shone brightly even in daylight, fell close to the enemy from far away. And then some small blasts spread around that area.

“Good job, Hikari! He is back on the right course again.” Lynx praised over the call.

Hikari kept her eyes on the opponent, from the mountain behind him on the west side of the battlefield, about 500 meters away from me. Despite being unable to hit him because of his high speed, she could at least shoot around him, keeping him on the right track.

Lynx’s countdown was my queue call. I took a deep breath and began chanting, “Oh Lord of Lightning, bestow me your blessings. Let me show your love to your kindred.....”

Boss also braced himself, ready with his large shield.

“...4...3....” As Lynx’s countdown slowly progressed towards the climax, a chill waved down my spine and something clicked inside me.

Was it the adrenaline? All my anxiety and hesitation evaporated away instantly. My head lightened up and my vision sharpened. Was I smiling a bit too?

A huge streak of lightning burst upon the area, blinding and deafening everyone around it, including myself.

The opponent assassin hesitated for a split second, as the boss surprised him, rushing towards him from the front. Even though Boss couldn’t clash with him, that single second’s hesitation was enough to get him struck by the lightning. It shocked and burned him to death.

Even the boss and Lynx took tremendous damage. Lynx barely lived with only 10% hp. But no one would have minded, even if both Lynx and Boss died together with the enemy.

“WE DID IT! WE WON!” Boss cried out through the voice call.

Ah, we finally won. I let out a deep breath.

But for some reason, I couldn’t be that delighted about it. It didn’t feel like my victory, but just a part of someone else’s. Obviously, I bested at my role as a mage, or else we would have lost. Yet an unsatisfying feeling surrounded my heart. It remained cold, unable to share my teammates’ happiness.

Something inside me screamed, I could do much more, so much more.

Shortly, the system transported us back to the Chaos world from the previous temporary tournament grounds. And immediately, system messages started flooding in. But I couldn’t care less about them. The battle earlier took a heavy toll on my mental strength.

A nice long bath wouldn’t be so bad right now.

Notifying my squadmates, I logged out of the game. Stretching out my stiff body a bit, l headed toward the bath. As I soaked my bare and vulnerable body in the warm water, a mysterious veil of rising steam enveloped me, filtering out all my tension and distress. Eventually, my sluggish brain started to function and generate thoughts properly again.

Geez, playing as a mage wears me out every time. Today, it was even worse. If only I weren’t a stupid mage.

I recalled that moment again where I just waited there silently with extreme focus. Every breath counted, every second felt like hours. Immense pressure engulfed me, as any mistakes could cost us the entire plan. This anxiety continued until the last moment.

It stressed me out more since it was way out of my style. I desired more freedom, to move like crazy, to fly like a bird, to experience the violent thrills of close combat. But being a mage all I could do was hide patiently, and deal damage as planned.

“Gahhh..I should just stop playing this stupid game and..brbrbr…” My sudden frustration-steered movement loosened the grip between my back and the sidewall of the bathtub, slipping me down into the bathwater.

Who are you kidding? We all know you can’t leave this game no matter what. My very own subconsciousness mocked me. But I couldn’t argue either, since it spoke the truth.

I'm too deep into this shit. I can't just give up all my hard works just like that, with a snap of a finger. But why? Why did I work so hard in the first place? What was my goal? There was something, something very important. Everything seems so distant now.

Well, One-day things will surely change, right? One day I'll become the main character of my own story, not just some side character in someone else's story.

Like always, I steeled my resolve to fight on towards my goal, as I watched the underwater air bubbles slowly gliding upwards to their freedom. 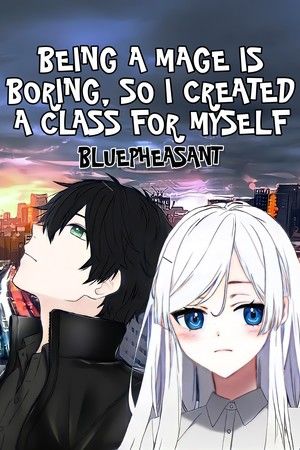 Being A Mage Is Boring, So I Created A Class For Myself