The Demon Saint is Missing, so I Ran to Another World Vol. 13

Lady Natasha Bellingsen. According to official history about her, she was a demon from some place outside what was traditionally considered as the region of Cherflammen. It was not mentioned where was that place, nor was there any reference to her actual age. What her fellow demons knew about her was that, after the death of Cassandra David, Lady Natasha Bellingsen appeared and claimed sainthood over the demons.

And the Saint of the Flame, the Overseer, Lady Seirna Stephanie, made her tacit approval over Lady Natasha’s authority by saying nothing.

Perhaps she knows the real identity of the new saint…

Well, this brought up a lot of new information for me. One was that, this place, Cherflammen, was not really ‘alone’. Contrary to what I knew about this place so far, the land of demons still had a lot of unknown regions to discover outside the maps they had here.

Probably, this is like the ‘Age of Discovery’ back on Earth.

Second, and related to the first point, was that even the locals here knew that there were other people in this realm aside from them. Natasha Bellingsen—though she was my student, Alexa—was not really a ‘demon’ in terms of appearance. She had no horns, got a pair of wings on her back, and a black hair, which was not common in Chersea and the other realms.

The fact that everyone readily accepted Lady Natasha’s explanation about her origins is proof that the demons are aware of people’s existence from the fringes of Cherflammen.

I’d really like to go on a tour around these parts, not only here, but on Chersea, Cherwind and the others, as well.

In any case, after displaying her god-power—the ultimate proof of her sainthood, Lady Natasha Bellingsen was acclaimed as the very first Demon Saint. Alexa, though some books I read claimed that she’s like a ‘Saint’, most demons look at her only the ‘legendary hero’, who did her duty as the demons’ ‘guide’ to ‘civilization’. Lady Natasha was ‘officially’ the Demon Saint, and she also took residence in the Saint’s Tower, the former home of Alexa.

On a hindsight, it’s the rational thing to do. It’s her home, after all.

However, it’s all behind me now. What’s important is…

“What happened to you?” was all that I could ask of Alexa as of the moment. Honestly, I had no idea of how to talk to her. I was just overwhelmed by a lot of emotions; sadness, happiness, and even longing, mixed in my heart. I just couldn’t believe that, after all this time, Alexa was still alive…watching and protecting me.

“Uh, where do I start, Sir G?” she chuckled. ‘Sir G’ was my old nickname in our classroom. “Haa…a lot of things happened to me after I was summoned.”

“So as what I read,” I smiled and gave her a head pat.

“You really are the Sir Greg!” Natasha, or rather, Alexa, laughed. “I bet you saw my library and read the books there!”

“Of course! I guess it took me several days or hours—”

“What?” I couldn’t believe what I just heard. “Are you saying that time here is dilated?”

Alexa nodded, “Sir, this is my place. Of course, I know what’s going inside here. And I purposefully inflated the passage of time; after all, no one can read those books for so long.”

I see. Well, I get her point. However, there was something else in my mind, “Even in that weird field at the lower floor?”

She nodded once again, “It’s a real one, too. I made it with magic. It’s the field where we first met before, Sir G, if you can still remember the first time Lady Madelaine summoned you?”

“I…I have vague memories of it,” I admitted.

“Right…your head is pretty banged up,” Alexa chuckled. “Anyway, Sir, that won’t be possible if I didn’t ‘die’ in the first place.”

“A demon body sure is different from a human one,” she flashed her non-existent muscles. “Not only long-lived, demons are naturally-compatible with magic, and their culture of disregard for rules for the sake of progress—even defying the heavens—is the perfect environment for my researches.”

“You know what it is,” she smiled. “Magic circles, transfer from one world to another, reincarnation and similar stuff. The reincarnation is for added longevity, because—though demons live long—we are still mortal. And I guess you know why I’m researching about the transfer.”

“You even caused me to be summoned here,” I pointed out.

“Ahehe…” Alexa just replied with an awkward laugh. “Don’t worry, Sir G, I already suffered for it. The heavens detained me for a time for my transgression. Apparently, the High King of the Gods has long been patient with me, though the act of breaching the Saint’s Ban on crossing from Chersea to Cherwind was the final straw.”

“However, I guess, I’m glad my mind was cleared only now.”

“Going back to the fact that I created the circle that summoned you, Sir G, the truth is, I made that because I was thinking of summoning you here,” she revealed. “See, when I was brought here, I was given unprecedented powers—almost the same as that of the gods. And I…I thought I should use it for what I believed was good.”

For some reason, the expression on Alexa’s face changed. I could feel it; she was like someone who had gone through a lot of terrible things.

“I failed, Sir,” Alexa told me with a poignant look in her eyes. She paused for a bit, as if gathering herself, before letting out a sigh and continuing, “What Chersea, and the other five realms have become today, is all my fault.”

Honestly, I couldn’t understand what she meant by that. Wasn’t it Alexa’s a hero? If she said that she’s at fault with the current state of things, then why was everyone admiring—almost worshiping—her as their greatest champion?

“Hm…that’s why it’s even more painful to me,” she said, having read my thoughts. “Everyone thinks I saved them, when in fact, I only made it worse. I thought I can be a god—and a good one, too. Yet, when I was given the chance, I made mistake after mistake.”

“So, with no options left, I turned to the last person I could run into for help…”

“And that person is…”

“Yes, Sir Greg. That person is you, my beloved teacher from Earth.”

I had no idea of how long I stayed talking to Alexa in that fifth level of the Saint’s Tower. She told me a lot of things about her; her adventures as the human hero, ‘Cassandra David’, her days after the 11th Human-Demon War and her eventual death. Then, she also touched on her life as ‘Natasha Bellingsen, the Demon Saint’, and how she continued on her experiments with portals, culminating in her success of bypassing Lady Ruro’s ban in crossing into Cherwind, and her subsequent punishment by the heavens.

“So…if you’re allowed to continue your experiments,” I surmised, “then the possibility of us returning to Earth is highly likely?”

“Yes, Sir!” Alexa nodded. “However, would you like to return there?”

I felt silent for a bit. Remembering my former life back there, it’s easy to say that I didn’t want to go back. However, what about my family? I’m sure, they were worried sick about me.

“Hm…if you’re thinking of coming home to Earth, Sir G, then we’d have to ask the heavens about it.”

“Eh? I thought you’re about to invent a magic circle for that?”

“I do. But I think you already forgot the fact that you killed yourself before, in a bout of depression,” she told me. “That’s why Maddie could summon you. Returning to Earth in your current body requires the permission of the heavens, and the God who rules that realm.”

“Oh…” Well, that did get my hopes up, though there’s also this side of me that didn’t want to go, for I already formed friendships and bonds with the people I knew here.

In any case, I guess it’s fine not to return, and treat this world as my new home.

“Don’t worry, Sir G!” Alexa gave me a tap on the shoulder, “If ever you miss our Earth, you can always come to this place and ‘experience it’. I modeled this tower after the places I knew, see?”

“Oh! Even in that weird field at the lower floor?”

She nodded once again, “It’s a real one, too. I made it with magic.”

I was thinking of exploring that part in the future, to which Alexa quickly answered my thoughts…

“Let’s get the others here as well, Sir G! I’ll take them on a tour inside my tower!”

By others, is it Maddie, Lily, Eris and the rest of the people in the Holy Palatial Gardens, Cherwind and Cherflammen?

“Yes!” she confirmed, though pouting. “But seriously, Sir G…”

Alexa’s face blushed a little, “I thought you’ll be faithful to that one girl you love. You always say that to us back then!”

“You’re seriously building a harem, like those in the mangas and animes you read and watch!”

“W-What are you saying?” Well, I had an idea of what she’s talking about, but still…it’s an embarrassing topic to talk about.

Of course, I know that. However, I still adhere to my limits. I’m not a secretly-perverted bullied NEET that goes to violate every girl he comes across with in another world.

My train of thoughts were interrupted when I noticed Alexa staring at me, amused.

“I really love peeking into your thoughts…no, actually, what I love is the way you respect people everyone around you even though you have a free rein to do everything.”

“Heh, you know what they say: teaching is not only a profession. It’s a way of life.”

“Yet, you’re still different from all of my other teachers…”

“I don’t know about that part anymore,” though I heard those words hundreds of times before, I’m still embarrassed to hear someone say that to me. I mean, I’m just doing my duty.

“Still, I don’t think that defending your students from abusive teachers to the point of losing your job is your duty. My other classmates would agree to that…”

“I can’t turn a blind eye to wrong things. You know me.” 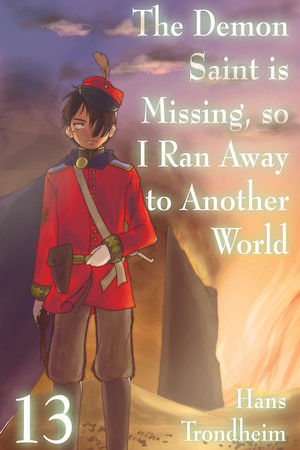 The Demon Saint is Missing, so I Ran to Another World Vol. 13