I crouch on the rooftop and stare down into the golden glow. Thank Andromeda the Wharf is so rundown, lest I’d never get a proper viewing of my own death. The countless holes in the metal ceiling create a perfect vantage point.

Climbing up here wasn’t too difficult either. Thanks to my compact design, it’s quite easy to propel myself upward. All I needed was a drain pipe and a wooden board awkwardly jutting out from the Wharf’s side. Now I can see everything.

The Wharf itself is just an old, abandoned warehouse where they used to can tuna. The bay is too far away to see with the normal human eye, but just close enough for the stench of low tide to be palpable. Sometimes I wish my senses weren’t quite so enhanced.

“Humans and cyborgs, please pay attention to this week’s bulletin postings,” Fordham calls out. His voice cuts into the open nighttime air like a knife.

Fordham handles the bookings. More often than not, people have dirty jobs they only trust cyborgs to do. Humans are too messy, whereas we can act with the precision of machines. Some of us even have the ability to cut off all emotions for periods of time. Makes the job easier, being a cold, heartless machine.

Every client has to go through Fordham, and he doesn’t like his time being wasted. He always tells everyone to view the bulletins before approaching him with a proposal. How it works is, there a are two bulletin boards. One with job listings, the other with cyborgs’ descriptions and their availability. Once a client and cyborg decide upon each other, they go to Fordham with their completed paperwork for him to sign. Everything needs to be supervised because everything is illegal. And Fordham isn’t going to prison.

He’s in a foul mood, glaring at every person who dares meet his eye. If I’m being frank, this is undoubtedly because of me. There was this job propositioned by several high-caliber clients several nights ago. They’d specifically requested me, something only the richest of the rich can do. I of course accepted the job because even an idiot would perform some light smuggling for ten thousand volts.

If only my pyrotechnic abilities hadn’t suddenly erupted from my hand. I would currently be sitting on loads of cash and still be the most favored cyborg in the Wharf. I’d also still have my left eyebrow.

That being said, the clients were enraged. They demanded not only a refund of their deposit, but also compensation for all the artwork I blasted to kingdom-come. Had I known the painted canvases were worth millions, I’d have asked for more money.

Fordham was able to somehow calm these clients, probably by throwing me under the bus. The past several days I’ve been living while looking over my shoulder, waiting for some goon to come thwack me. It never came, so I assumed Fordham had convinced the clients to be patient. They were trying to wait me out.

Well, their wait would soon be over. I’d spent the past forty-eight hours using up the better half of my savings to get myself out of this situation. According to the technician I hired under the table, this robot would have an exact likeness to myself. It’s left hand would also conveniently explode just as mine tends to do. Only this time, I’d die with the flames.

Sure there may be some casualties, but if I’m being honest about ninety percent of the people in this business are trash. Hopefully not too many cy’s like myself will be caught in the fire, but they’re sturdier than humans anyway. We can always be repaired, so long as our human brain isn’t damaged. Science has developed an artificial replacement for just about any organ you can think of. The brain, not so much. Too complex to replicate.

If I had to guesstimate, I’d say there are about two-hundred people down there, a mixture of cy’s and humans. Enough people for word of my death to spread quickly. Perfect. Maybe someone will even catch it on camera and upload it to the internet. The only thing that spreads quicker than fire is social media.

My remaining human knee joint aches from crouching for so long. I should get it replaced after I skip town. Artificial is the way to go these days, especially since the human part of me is the only thing weighing me down. Oh, that and the spontaneous fire-casting hand. I definitely need to get that checked out.

The rickety door slides open. It needs to be heavily oiled, so the screeching of rust on old paint and metal certainly begs attention. No one is allowed to enter or leave during job matchmaking, so of course everyone’s heads swivel toward the entrance.

The robot looks exactly like me, and it suddenly seems like the three thousand volts I spent was worth it. That technician really knew what the hell he was doing, although he did look kind of pompous for working on machines. I’m glad I hadn’t overlooked him for it.

Not Me enters the Wharf with a suggestive smirk on her face. Where the cyborg bouncer stationed out front is, I have no idea. He was probably ordered to allow me in, should I have the nerve to show up.

“Hello trash,” Not Me says.

I muffle a snicker with my hand. The technician had me record some audio so the robot would not only look like me but sound like me. Some fancy AI would allow the robot to know which turn of phrase to use next. I didn’t record too many snippets, though. This was meant to be quick.

“Pyro,” Fordham exclaims across the large expanse of people. “Yet again you show us how well-deserved your name is. Unfortunately I cannot say it’s for good reasons this time though.”

Not Me shrugs and points out, “You’re the one who hired me.”

This wasn’t exactly true. It was more like he lended me out. That particular phrase had meant to be directed toward one of the clients, were they to approach me. Still, it works.

“You cost us millions!” a woman client with a fluffy pink boa accuses. I hope she approaches the robot before it explodes.

“Money is irrelevant,” Not Me says in monotone. I actually have to bite my knuckles to keep from crying out in laughter. The woman is seething so much I can see the veins popping out from her forehead.

Fordham scowls and says, “You owe your clients a great sum of money to make up for the damages you inflicted. Stay after the matchmaking so we can settle out the brass tax.” And by that, he means to decide exactly which jobs I’ll be doing for zero volts per hour for the rest of my miserable life. Barf. Why I even worked under this man for so many years is beyond me. I should have skipped town a long time ago.

The thing is, Fordham has a specialty in getting cy’s indebted to him. More often than not, it’s some fabrication of events which causes the cyborg to mess up a job. In fact, I’ve almost ruined another expensive job in the past due to suspiciously dire circumstances. It was pretty obvious it had been Fordham’s doing, but since I hadn’t fallen for his snare I chose to overlook it. I’ve been extremely careful ever since.

My arm shooting flames, however, is a different situation. I’ve had trouble with the damned thing for years, only it most recently went from not creating fire at all to making too much of it. Now it was apparently giving no warning either.

While Fordham may have nothing to do with my wonky arm, he was about to pay for his past mistakes. I wanted his entire warehouse burned to the ground. He must have been so elated to find out his most lucrative cyborg was finally his pet. But no, he wouldn’t be owning any of me. Bolts and all.

So I sit pretty and smile widely when Fordham steps closer to the robot. Of course he’d want to gloat where everyone can see. I’d been expecting it.

“Make sure you’re still here afterward, or your next job won’t be so pleasant,” Fordham says with his hand on Not Me’s shoulder. I can practically smell his hot, radishy breath from here.

One mechanism which I spent an extra four hundred volts on was the heat sensor. Once someone is extremely close or sets their body heat against the robot, that is when it bursts into flame. And Fordham is all in Not Me’s personal space.

I mouth the word boom as the robot’s left arm catches flame before detonating the explosives hidden in its core. Fordham never saw it coming. 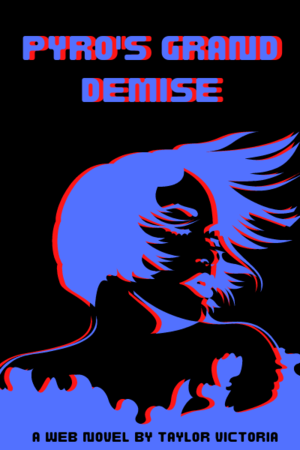