The teacher drowsily awoke from his slumber and looked at me with droopy eyes. “Oh, uh…” He seemed to struggle to form the words to speak. “Yajimoto, I forgot to introduce myself.”

I was not Yajimoto but Yajima.

So, was ‘Teacher’ part of his name or just his title?

“Is that all?” he spoke ever so lazily.’

“Yes, that is all,” I slowly slumbered into my seat.

Then, the female student spoke to me, surprisingly, “Disappointed, aren’t you?” She said loftily.

I slowly turned my head with my remaining happiness, “I want to say shocked, but…” Once I spoke, however, she had returned to her book. ‘What a snobby girl,’ I thought. At least let me finish my reply before ignoring me.

In any case, I had no idea what to do. I was wracked with nervousness, standing there frozen. I couldn’t reprimand my classmates and teacher for their idleness just because this wasn’t the high school life I wanted. So, I decided to study with my textbooks, waiting fervently for lunchtime. I wanted to escape the awkwardness of a silent class.

I’d already finished reading half of my history book when the bell rang for lunchtime.

I had imagined my first lunchtime to be cheerful. I expected classmates to crowd around me and some to invite me to eat with them.

But knowing the weird situation, I knew there would be no excitement, and I shouldn’t expect anything. I resignedly followed the growing line to the elevators.

The teacher was the first to leave the classroom in an elevator, but none of the students followed. I deduced that that elevator was for teachers only.

Meanwhile, most of the classmates looked more cheerful than before, and their chattering grew louder. At least this was expected. Any high school student should be happy for lunch.

And I said most because I looked back and saw the diligent male student reluctantly leaving his desk, taking a textbook and lunchbox with him. This time, I clearly saw his face which confirmed my memories of him. His eyes had a moribund spark. His mouth seemed to have smiled many smiles before but now has settled stoically. His forehead was wrinkled and his eyebrows frowned. It seemed that he was always in deep thought or lost in thoughts. Either way, he had a lonely vibe that made me want to avoid him.

Meanwhile, the female student didn’t budge except for her dainty fingers turning the page of her textbook. By the looks of it, she may have finished two of her textbooks and will be proceeding in answering them. Unlike the male student, she didn’t want to waste time on a mere meal.

And as much as I thought this was an opportunity to talk to her, I had to buy my lunch.

Fortunately, things were highly organized here. There was no way one would get lost because of the guidance of the signs on the walls.

The elevators were cramped and humid. I thought no one would press the button on the cafeteria’s floor. But the elevator automatically brought us there.

Everything seemed strictly controlled during the school days so one wouldn’t stray during school hours.

We’ve arrived at a grand restaurant. Everyone walked calmly but each foot had a spring in each step. It doesn’t matter what the situation or scenario was, but one always needs to eat. That thought reminded me of the careless student who decided to study rather than eat.

For them, such luxury before us was normal. But for me, it was bewildering. To think that I, a mere scholar, would be eating in a high-class restaurant? It wasn’t even supposed to be a restaurant!

As I walked, my thoughts wobbled me——how will I eat? How should I act? What were the manners? What were the etiquettes? But more importantly, how much was the meal!?

Each step convinced me to retreat and skip lunch. Maybe, I could go outside the school to a nearby convenience store. But if I back out now, my schoolmates might make fun of me. I knew I wasn’t rich, but I wanted to somehow fit in.

I walked with slow steps, trying to be inconspicuous. Finally, I arrived at a table with my lonesome self.

A waiter, or a butler, served me with a menu card. I sensed him discriminately glancing at me before leaving. The waiter might even be wealthier than me.

I looked inside and nearly gasped in shock. I hid my pale face behind the card.

These dishes… I can’t afford them! I regretted my decision to advance. I should have retreated instead.

But, now I was on the frontline and there was no escape.

I mentally checked my wallet for my money and desperately browsed the selections.

The dishes seemed to be all in French. I didn’t know any French, but the menu was kind enough to have reference pictures for some of them.

Finally, I found a meal that was within budget——a pitiful appetizer.

I was too ashamed to raise my hand, so none of the handsome and pretty waiters and waitresses attended to me. It was better this way. Even if I look dumb sitting at a table without eating anything, it was better than eating a pitiful meal.

Then, there was a near-mocking voice that spoke behind me.

“You can’t afford anything, can you, dear scholar?”

How should I respond? With a lie or with a truth? I searched for a middle ground and fixed my face and turned to him. “No, I just couldn’t decide.” I laughed softly.

“How about I treat you since it’s your first day at school?”

This time, I intently looked at his face. I thought he might have been in my class with the boy’s group. “There’s no need for that. I can pay for it on my own.”

He glanced at the menu card lying on the table. “You’ll get this appetizer?”

Slowly, I closed the book whilst I smiled at him, “No, I was deciding if I should get the Pâtes d'Alsace or not.”

“Oh, really?” he chuckled. “If that’s what you want, then,” he raised his hand which called the attention of a waitress nearby.

“Don’t worry about it! Anyways, I have to go back now. Nice meeting you!” Quickly, he left.

“And what’s yours, sir?” the waitress turned to me with a condescending smile.

“Can you cancel that order?”

After painfully paying with my blood, sweat, and tears, all of the students returned to the elevators, starting from the highest class to the lowest.

While we waited for our class’s turn, the boy who offered lunch came to me with his heavy hand on my shoulders. “Did you get lunch?”

“The waiters didn’t serve it to you, didn’t they?”

“They were discriminating against you.” He sighed. “I want to complain about this to the management, but…”

“Well, never mind. Maybe, next time you should join us at our table.”

Their table. From what I’d noticed, almost all the boys were in one group, though, there weren’t a lot of boys compared to girls in our class. I worried if I would be able to fit in since their leader seemed to be the scary type.

“Consider it? No, you should join us! We boys have united after all!”

What about the lone male student? “I—I’ll think about it.”

As we rode the elevator, I thought about the boys, mainly the kind ones who approached me. Maybe, my first impression of them was wrong. I was not sure if that applied to the numerous girl groups as well, not as if I’d succeed in fitting in with them anyway. My best chances of making friends were of the same sex. So, I ended up considering joining them for lunch tomorrow during the latter half of the class.

The silent class has ended though I shouldn’t be saying that since the uncaring classmates chattered all around the room. Only I, the two diligent students, and the teacher stayed silent throughout the school day. In a way it was depressing but at the same time relaxing. If the premise of school were taken away, I would have considered this a café instead with all the chatter.

Even if the teacher taught or not, I was able to complete half of my textbooks except for the answer pages. I felt accomplished but felt disappointed again. If I could self-study this efficiently, then what was my enrolment in this school for?

There was nothing. No activities, assignments, announcements, or duties. It was like back in junior high school when I studied all by myself, only doing what was required of school.

Wasn’t this life no different?

I wouldn’t allow that.

This time, the route to the elevators was chaotic since the school was over. Everyone wanted to roam around school, especially the mall. But, I was exhausted and was yet to see my room.

Though my few things have been moved, I haven’t begun to unpack them yet. I haven’t seen my stuff for three days. So, I decided to head to my room first.

I was in a wide hallway, scanning around for my room number, G22. Once I found it, I placed my ID card on the door handle, the door unlocked, and I pushed it open.

In my bedroom, I found two boxes worth of my things and took upon the chore of unpacking and sorting them. It was beginning to look like my living space, but it only remained in the state of ‘beginning.’ Even after filling my walk-in closet with clothes and shelves with books, it still looked empty.

I guessed I should buy more stuff, but I don’t have the money to do that. Before, that didn’t matter, but it did now. 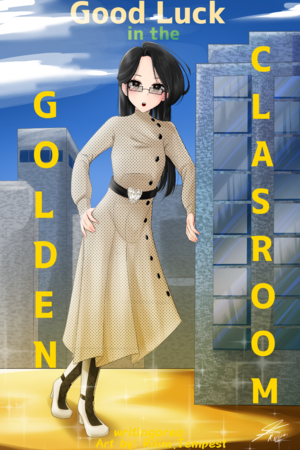