My Hectic Life after Adopting a Shape-shifting Dog!

she kept chewing as she looked at us.

she put her hands on the packet of chips I bought for some late-night anime binging and put a bunch of chips inside her mouth.

Mom-"You can say that again."

mom and Yui Both Averted their gazes from that girl and glared at me with extreme malice in their eyes.

"Who is this Girl?" asked mom

At that time I found out what it feels like to be fucked up.

"Big Brother, Can I say Something?"

That is when I first heard her voice which was so soothing to hear that my ears melt off.

Our heads turned 90 Degrees at the same time and we all looked at her.

Then suddenly mom spoke, "Yeah sure but why are you naked?"

"Could you not give them the wrong idea, I don't even know you."

after simultaneously getting insulted by my family I was at my limit So I asked her"Um.. can you explain what happened exactly?"

"uh ....ok... well after I followed you till your house, you noticed me and let me in and also asked if I was hungry, which I am still now, Then you left to get food, but when I checked The fridge there were meatballs and chips and cola and also chocolate; so I ate them because I was Hungry....... should I not have?"

"THAT HAS NOTHING TO DO WITH YOU BEING NAKED?"

"GODDAMIT WHAT IS GOING ON I NEVER LET A GIRL IN THIS HOUSE, HEY! DON'T LOOK AT ME LIKE THAT; I AM INNOCENT I AM TELLING YOU AND WHERE DID THE DOG GO ANYWAY?"

After that, she placed her bare right hand on the ground and also her left hand and sat like a dog when she started to shrink, fur started to grow from all over her body and her hair started to shorten, her face elongated into something like a mouth of a dog, her ears popped out from her head and her 'human' ears disappeared inside her, a long and fluffy tail emerged from her rear end and now her size was almost one-third of her original height as 'human'

the three of us were synchronized as our jaws dropped seeing that transformation.

Aziel has no family members left, Aziel dropped the dog food and blacked out.

( this is how they would tell in the Pokmon games)

I don't Know How long I was Blacked out but My life completely changed after that, Literally; Because when I woke up, I saw Mom in the kitchen making dinner, Yui and that girl watching tv and laughing while eating chocolate!.

"Aww, mom can't I have the dinner later?"

"No there is a specific time for everything."

"Now now Yui, don't be like that, listen to mom, we can eat that chocolate later."

"you are such a good child Yui."

"OK HOLD ON A SECOND WHAT THE FUCK IS GOING ON!!!"

"THAT IS NOT THE QUESTION, THE REAL QUESTION IS HOW ARE YOU GUYS GIVING OFF A HAPPY FAMILY VIBE HERE?"

"what do you mean aren't you happy we returned from our vacation?"

"NO NO THAT IS NOT THE POINT, THE POINT IS YOU GUYS ARE OK WITH HER HERE?"

"why not Emi is such a cute girl."

"EMI? WHERE DID THAT NAME COME FROM?"

"well the total name is Emilia, but for Family, it is Emi, Cute right?"

"Don't be a party pooper Aaz"(Mom calls me Aaz)

"why not, you brought her right."

"No buts you promised to look after her didn't you "

"MOM SHE IS A LITERAL SHAPE-SHIFTING MONSTER"

I looked at her, her gaze was towards the floor, she had such a sad face as if she would break if I touch her, I didn't know her background, I didn't know why she was abandoned, I didn't know anything about her, so I pulled another pro Gamer move and labeled her as a monster, I am such a dick.

"Um... No, it's alright, you people are kind enough to let me live here without questions, gave me clothes and food, I am grateful, and you are right I am a monster because everyone called me one, I am neither a dog nor a human, I am an abomination."

Everyone was silent, we all listened as the commentator from the TV kept talking, but none of us uttered a word, until.........

"So Big sis do you wanna sleep with me tonight."

"Clean up the table I am bringing the dinner"

mom had the right call, whenever there is an idle air between people, Food is the thing that can lighten the moods of people.

and the Dinner was Awsome as well 'Sizzling Pork chop'

"Now this is Real Food."

"By the way who named her?"

"I see, from where did you get the inspiration?"

"Well she has silvery-white hair, so it reminded me of a certain Half-Elf"(Re: Zero reference)

"you fine with this name E..Emi"

"Can't argue with that"

"A girl with a healthy appetite is always welcome"

NOW THE STORY BEGINS FOR REAL 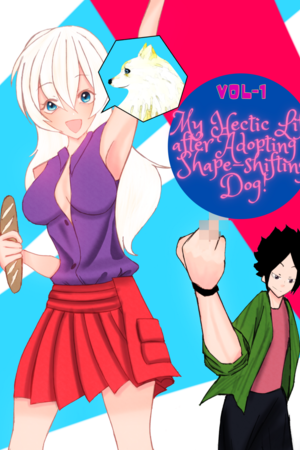 My Hectic Life after Adopting a Shape-shifting Dog!