It had been only two days since the school year started and already there were rumours circling about Sakura. The part of her being an heiress was true as her family managed the largest hospital in AZ city. The hospital’s specialty in ‘Unique Injuries’ was what made it so famous and allegedly where much of the money it earned came from.

I had woken up earlier than usual. After taking a quick glance at my alarm clock, I noticed I still had some time before school started, so decided to get a few more winks. However, I started to get a bad feeling causing painful headaches which prevented me from going back to sleep. Exiting my third-floor dormitory room in my pyjamas, I went down the dormitory entrance to put on a pair of my sport shoes. I let my ‘bad feeling’ guide me and it brought me to a corner of the dormitory compound. There was nothing notable in the area except for a storehouse.

I slowly walked over to the storehouse and luckily for me, the door was left ajar. I stood by the door and peeked inside. Sakura was being tied up to a chair, but she did not look afraid at all despite her being surrounded by four boys who looked like they were ravishing her with their eyes. One was even starting to drool. There was a girl as well who was probably the mastermind as I could hear her ordering the boys to get on with it. The ‘bad feeling’ was getting even stronger which left me unable to move while clutching my head. I found myself slowly losing consciousness but before passing out, I thought I heard someone screaming.

The next thing I knew, I woke up in the dormitory’s infirmary. The nurse told me that teachers found me lying unconsciousness outside the storehouse and luckily, I was not injured. I then asked the nurse about Sakura. She revealed Sakura was not injured and the perpetrators seemed to be traumatized about something.

When I was cleared to leave the infirmary that same evening, I passed by Sakura on the way to my dormitory room. She did not look my way at all but upon earshot, she mumbled something.

That stopped me at my tracks, and I turned to look at her. Sakura just kept on walking, but she glanced back at me with a look of disappointment on her face. Sakura would then not speak to me for the following two years.

I slowly opened my eyes and stared at the ceiling of my dormitory room. I wondered why I had a flashback dream. Looking at the alarm clock by my bed and noticed the time, I decided to get a few more extra winks of sleep before getting ready for school. Suddenly, I had a bad feeling about something. Before I could fall back to slumber, my head started to ache intensely. I fought back the urge to scream in pain. The headache was a lot worse than in the dream.

I struggled for several minutes before getting out of bed and rushed out of the dormitory building, in my pyjamas and sport shoes. My ‘bad feeling’ was leading me to the storehouse on the dormitory grounds. I felt a sense of déjà vu.

I slowly walked over to the door which was left ajar and could her voices. I peeked to see Sakura tied in a chair just like in my dream. It would seem the boys and the girl were all the same people as well.

Before I could pinch myself, I hear the boys ready to have their fun with Sakura. Unlike in the dream, I fought through the headaches and went into the storehouse. I immediately beat down all the boys and Sakura somehow freed herself to catch the girl before she could escape. While waiting for the teachers to arrive, I glanced over at Sakura who seemed to be sizing me up. Her gaze fell to my face then down to my feet. She circled me several times before stopping to ponder about something.

When the teachers arrived, Sakura went over to them to explain what happened. The headaches I was having had subsided.

“Lilianne Evans.” Sakura suddenly stood right in front of face, saying my name. I backed away a few steps in surprise. Seeing my reaction, Sakura giggled.

“You are cute. Thanks for the help.”

I did not know why I could not seem to look at her in the eye. Sakura held out her right hand.

“You probably know me but let me formally introduce myself. My name is Sakura Kitou, heiress of the Kitou AZ hospital.”

I shook her right hand albeit a bit shakily out of nervousness.

“L-lianne Evans, nice to meet you.”

After a moment, the both of us started laughing at how awkward we were acting.

I was fidgeting at my seat while everybody was leaving the classroom for lunch. When questioned by my classmates, I told them I was waiting for a friend. Moments later, I saw Sakura appearing at the entrance of my classroom waving at me. I quickly got out of my seat to join her for lunch.

After buying our lunches from the cafeteria, the both of us start chatting happily about mundane things at my classroom. I was careful not to touch the subject regarding her family. It was not that I did not want to but every time I tried to mention it, I started to get a headache. Seeing I was probably not feeling well, Sakura suggested I went to the infirmary. When I refused, she dragged me there anyways and forced me to rest. I laid on the bed and eventually fell asleep. 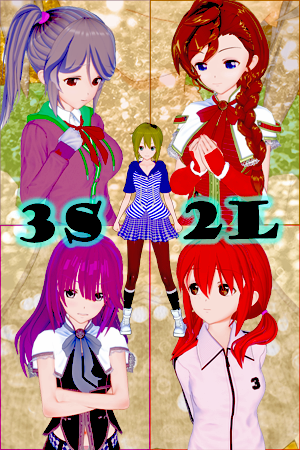