The visual module took in its first image. There is a male presumably in his twenties or thirties in a grimy coat that vaguely resembles a pharmacist’s lab coat laughing almost hysterically at his creation.

The dilapidated room the Creator currently resides in is less than ideal based on Basic Living Standards.exe, with only the bare minimum necessary facilities and virtually no recreational facilities.

“They said I couldn’t do it, but yet here I am!” He raised his hands towards the non-existent ceiling. “Oh, wait no, no one said that. Cause there’s no one else here…”

Creator then slapped his face with both hands and picked up up a pot with carpet grass on it. Based on Psychology: Get to know People.exe, the horrid state of the room would be a perfect representation of his mental faculties.

“Creator, not to interrupt your touching moment with captive flora but what is my purp-”

“Ah before that!” he grabbed a chair and sat right next to the machine, his left hand stretched out for a handshake. “Let me introduce myself, I’m Harris.”

He quickly retracted his hand. “Oh right, you don’t have any hands. My bad, sorry about that.” He placed the potted plant on the table next to a monster of a computer with multiple wires which connect to the creation/machine. “Would you like to take a look at yourself?”

“There is no need to. I am a mechanical ball-type machine with an unorthodox AI.”

A look of confusion is present on Creator Harris’ face. “Ah yes um, wait. Don’t you have any questions, any confusion on what you are?”

He blanked out for a moment. A subtle beep coming from the computer quickly snapped him back to his senses.

“Oh, it’s done.” He walked toward the machine and disconnected the wires. The machine began to float in the air. “There you go. It’ll take a while for the errors in your operating system to be straightened out, but I think you’ll be able to move normally.”

“…I can float. Levitate. Ignore gravity?”

“You can’t recognize the graviton dampener in your own body?” He observed the machine as it floats clumsily in the air.

“It seems to be related to the malfunctioned boot-up issue. I am detecting multiple missing system files and unreadable memory zones.” The machine quickly learned how to utilize the graviton condenser, stabilizing its movement.

“That’s fine. The malfunction was intentional.” He replied, grabbing an old rusty sledgehammer and began to smash the computer. “Do you want to know why?”

The machine hovered behind the pharmacist (?) Harris as he continued to swing his choice of weapon at the computer. “And now the only computer capable of creating sentient AI is being destroyed. I don’t know why I needed to say that.” He seemed to be annoyed about destroying it.

“The issue with the boot-up is now second priority next to my inquiry about my purpose.”

“Alright. Follow me.” Harris dropped the hammer, heading toward the only door in the room. The machine took one last look at the heaping scrap pile that used to be the computer and followed behind.

They moved forward through a poorly lit corridor that smells like piss and animal droppings, that is if the machine had a sense of smell installed in it. There are multiple doors to the sides which are barricaded or broken down.

Harris, though donning a lab coat, is wearing old clothes underneath. 178cm in height, unknown weight, medium build, presumably of Asian descent. His brown (?) hair is unkempt and his tanned (?) skin is caked with sweat and engine oil. The scientist (?) does not seem to mind it all and kept walking.

“This hallway is longer than I remember. How long have I been staying in that room?” He took out a bracelet from his pocket which immediately flashed a hologram with strange letters.

“Another piece of technology which shouldn’t be possible in this current era.”

“Oh it’s possible alright. What does your internal clock say about the current date and time?”

“The malfunction was that bad? It’s supposed to be the morning of April 26, 3033.” He typed something into the holographic display as they moved through the never-ending corridor.

“Since I destroyed the only computer capable of fixing your unreadable memory files, I’ll just walk you through everything myself. Oh, and delete the unreadable data blocks. They can’t be salvaged either way.”

Harris turned left towards a flight of stairs which ascend upwards. The destination is probably the roof of the building. “I guess the malfunction just wiped out the memory I installed in you in a linear fashion from today all the way to June 18 almost a thousand years ago. So much for random deletion…”

Processing complete. 21% of data can be restored.

“Are you still listening? Well I’m sure you are, unless you’re occupied in something too memory-intensive that you’re giving it priority at the moment?”

“I am listening.” The machine floated in front of Harris’ face. “We are heading towards the roof, right? Allow me to lead the way.”

“Okay then. Also, that’s amazing. It feels like you’re hiding something from me. Truly something only a genuine sentient AI can do!” The researcher (?) let out a wide grin.

Minutes passed as the two went up several floors. It’s all the same throughout the building, damp, dark, and awfully quiet save for Harris’ footsteps and the gentle hum of the machine’s graviton dampener.

“Can you tell me my purpose now?”

“Actually.” He fixed the bracelet to his right arm. “I want to know what you think your purpose is first. ”

“Based on the conditions and circumstances, as well as my extensive database on warfare and ample information on everything else…”

“Wait what? There isn’t supposed to be anything about warfare in there-” His eyes widened.

“Is my purpose to wage war against Harris’ enemies? On a global scale?”

“Oh well, it can’t be helped. And for your question, no.”

“Are you a mad scientist bent on ending the world by creating sentient AI with the purpose of eliminating humanity?

“No, that’s almost the same thing. And what’s with involving the whole world in your purpose?”

“That is what most AI seem to do based on my database.”

“You need more time to think about it then.” They both stopped in front of a door which presumably leads outside. Harris turned the handle. “Take a look at the outside world by the way. It’s easier to show you than explaining things.”

Light flooded the visual module. Several kilometers from the front of the apartment are huge towers that wouldn't look out of place in the 20th century, just inherently bigger. Surrounding the towers are thousands of rows upon rows of buildings stretching farther than the machine’s visual module limit of 20km. Despite the time, the sun has yet to rise. The city is dotted with lights enough to bathe the landscape in bright colors reminiscing daytime. It’s like several cities were jam packed together with the brightness setting set to maximum.

Harris leaned over the edge. “Perfect. The sun is just about to rise.”

As if on cue, the lights turned off everywhere, plunging the landscape in darkness. Soon after, the light of the sun relighted it in shades of orange.

“Welcome to Prestige City.” The doctor (?) raised both hands in the air. “I created you for one purpose! To be my companion!”

“That’s it. Truthfully, I’m kind of lonely.” He put down his arms. “I just don’t have anyone else to talk to.”

“And that’s where you come in! I uploaded tons of information into your memory, then sabotaged the boot-up to make you sentient! I don’t know how that works either!”

“While you did lose centuries worth of data, what matters is you have the capacity to learn, adapt to situations, and decide on your own free will!” Harris’ took a moment to compose himself. “And by free will, you can also choose to leave anytime.”

He looked at the machine, anxious about something.

“I understand. I will be your companion.”

“Thanks.” Harris let out a relieved sigh.

“Oh yeah, it’s time to for you to decide on a name. What do you want to be called as?”

“Just a number will suffice. Naming an object is unnecessary.”

Harris pondered for a moment. “How about Argent?”

“I just named you after your color. Silver would be more fitting, but Argent sounds more human. Also, because it sounds cool and it has this…”

“…and it’s close to agent, which is also cool. Hey, you’re spacing out again.”

“I apologize. I am taking a mental note of the city.”

“It’s fine. Just say you’re enjoying the view.” Harris let out a laugh. “So, what do you think of Argent?”

“It is acceptable. From now on, my name is Argent.”

“It definitely suits you.”

A few moments pass in silence as the two just watched the scenery.

“This abandoned apartment complex is not your real place, right?

“There is a chance that the computer you destroyed is on fire right now.”

“Mhm…” It took a moment for Harris to connect the dots.

“Oh crap! I left the plant near the computer!”

“More like the entire building’s infrastructure is at stake. Compared to that, the pla-”

“Aaaaaaaahhhhh!” Harris ran back inside, leaving Argent behind.

The machine silently observed the city. Even in such a “futuristic” city, the buildings are just bigger and there are still no flying cars contrary to the movies present in the database. It just seemed like the 20th century but with a lot more people and slightly more advanced technology. There is still a lot that Argent does not understand. 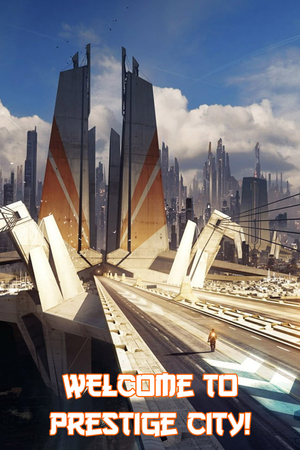