An Artist from Osaka

Snow drifted across the academy courtyard, gently blanketing the remaining plants that had braved Autumn. Her professor explained that it had been some years since such weather had visited Tuscany and he encouraged everyone to capture such an experience.

Yet, she found herself sat alone. The winter in Osaka had prepared her for such an occasion, wrapped up in warm layers of clothes she had immediately strode purposefully from her dormitory with equipment tucked under her arm to meet the elements head-on.

A cold northerly wind disturbed the heavily laden tree that Natsu had chosen to sit beneath, depositing icicles onto her warm shoulders. She paused briefly to examine the patterns they had fallen into before brushing them away along with the tiny piles of snowflakes that had gone unnoticed. The canvas positioned before Natsu was already a riot of earthly tones buffered by a deep stone grey, she had set out to capture the courtyard in transition but had swiftly become more interested in the activity of her peers. She moved her brush smoothly across the surface, aiming to capture the arc of a snowball soaring through the air. Her professor had told her it was important to be mindful of the subject throughout painting, so between strokes she reminded herself to pause and observe. Natsu noticed someone dart behind a distant statue, ducking down to collect snow with their bare hands. She sat too far away to hear their laughter above the wind, but she knew from their expressions that it was a joyful moment.

Her most prized paintings captured such moments, the activity and motion of the world around her. Some had offered her praise, but it was often not because they recognised talent, but difference. Her peers were already building a reputation for portraits, which attracted the majority of commissions that accompanied visiting nobility. Natsu had arrived in Florence late last year to study and had yet to receive a single commission. This rested heavily on her heart, as she knew full well the cost of her attendance.

Crunching snow suddenly interrupted her wandering thoughts. She turned and found Louis walking unsteadily towards her, carrying an easel in one hand, and waving with the other. Speaking Italian made her nervous, she found her workshops mostly involved listening so she could avoid the embarrassment of stumbling around everyday expressions. Louis seemed to actively engage her in conversation wherever possible, she did not know what to make of this initially and found it stressful. As time passed, she had softened to his presence and no longer minded his intrusions. It seemed like he was also an oddity, although his talent for portraits was already well known across the academy. At the very least it gave her an opportunity to practice speaking with somebody who would not make a mockery of her mistakes.

Good morning Haruo, can I sit with you?

Please. Natsu motioned beside her, prompting Louis to begin clearing snow from the bench. It had startled her at first, but she had become accustomed to the name she went by as a student. He lay a small blanket down to avoid getting wet and sat beside her. His long hair was windswept and full of snow. She suppressed the urge to laugh and continued painting, waiting to hear what he had to say.

Much to her surprise, he did not speak. Quietly he set up his own equipment and began to paint her courtyard. Her courtyard, she thought bitterly. A sense of feeble rivalry caused her to peek often at his canvas, each time prompting her face to pale further and further as trees, statues and students were brought to life.

Is he doing this to embarrass me? She thought whilst wildly smudging a window by accident.

His brush suddenly moved onto Natsu’s canvas and carefully corrected her mistake with ease.

He carried on capturing the courtyard but did not include the epilogue of the skirmish.

You did not…? She pointed at a snowball on her own canvas. Louis shook his head in response.

It is too difficult. I like to see your work as you capture such movement. He waved his brush at her canvas.

Look here, you see the student on the far right pulling his arm back? I look at my own work and see only the past, I look at yours and there is a hint of the future. It is highly unusual here. Do you do portraits?

Her face regained colour quickly and she looked away to avoid embarrassment.

No. I never had time to practice.

A portrait requires a subject.

And you never had a subject?

Well… you could practice with me?

I am sorry but I could not pay you.

You would not be expected to pay, everyone offers their time. He eyed her carefully. Everyone.

If you are comfortable.

Natsu had taken many steps to avoid her peers from the moment she had arrived. With such a secret to carry, it was easier to act aloof and pursue other artistic opportunities available to her. This had come at a cost, as she had nobody to practice portraits with outside of her workshops.

I will ask the professor for a studio.

Natsu nodded mutely and began packing up her equipment to escape.

See you tomorrow? He asked.

Natsu fled from the courtyard in a blind panic. What had she signed herself up for? 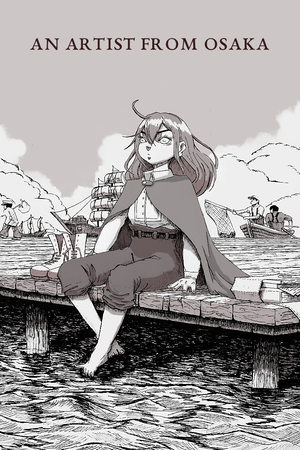 An Artist from Osaka