How Come It Rains In Heaven?

The level of an individual entity’s Light may not exceed that of the entity itself.

The boosters screeched as they disengaged with the tarmac and the city fell from the windscreen, lost to the night sky. Kurama pushed forward on the wheel and the road swung back into view again, the entire vehicle hopping several times on its anti-gravs before settling and beginning to pull away. Horns blared all around them and vehicles scattered like a herd of startled buffalo. Did they even have gravity here?

Rinako still hadn’t got used to the sky. New constellations beamed down at her like discarded jewellery on its surface, corporate slogans and logos jostling for position. She glanced out of the passenger window. The brilliant outline of a young woman’s face hung in the immeasurable distance above them, its mouth flickering between open and closed smiles. In her hand was a tube of toothpaste. How much does it cost to rent ad space in the sky?

‘Unit twelve, unit twelve-!’ screamed the radio’s distorted voice. ‘Kurama, where the drak are you? Pick up, you useless mo-‘

‘Yeah, yeah, alright, alright-’ Kurama pulled the radio’s globe from its housing in the dash, clicked the large circular button and held it to his mouth. Rusted metal showed beneath the receiver’s flaking green paint. ‘Unit twelve responding - what’s the matter, Chizuru, bad date last night?’ He released the button and static hissed from the speaker.

‘Funny.’ The voice came back flatter than the empty instant-ramen packets littering the floor. ‘Looks like a Grade 2 up in… Takaya Place, Akihabara.’

He put the receiver to his mouth again. ‘This another of your temporary anomalies? Because last time we went up there, I had to-’

Kurama let out a slow sigh. ‘Ahhh… drak.’ He paused. ‘Ok. Unit on way.’ He replaced the receiver and flicked a switch on the side of the wheel. Two balls of green light appeared beside the car and began to circle them. Holo-sirens.

The moment she’d known was coming.

‘- and then of course, there’s phasing.’

The instructor stood at the front of the auditorium, her muscular shoulders a stark contrast with the delicate red tresses that lay across them.

‘You can read about it all you like but you’ll only really know it when you experience it. Wherever you are assigned - those of you who haven’t been expelled by then…’ She was looking at one of the boys in the front row, who had been whispering to another student behind the raised cover of his satchel. He shifted back to his place. ‘- Most of the wards will be boxed. That means they exist in light-space. Each ward has a certain size in three-dimensions but may project luminally. A ward’s true size can only be measured when its luminal dimension is known. Shikishima on the mainland for example…’

She waved a hand and a holographic cross-section of the city appeared over the dais. In it one area was highlighted in green. ‘… may appear to be one of smallest of the special wards. But go down in light-space and… ’ She gestured again and copies of the highlighted ward cascaded beneath it, like the unfurling vertebrae of some ghostly spine. There was a collective intake of breath.

‘Of course the floors you have access to will depend on your clearance level. Though I’m sure for young hotshots like you that won’t pose a problem…’

A wave of laughter passed through the class.

‘How many floors can a ward have?’ Called a voice from the back.

‘In theory, a single ward can have any number of floors. Ashika-Tengsin Holdings for example, has more then two hundred and forty. Though most of them are for storage and manufacturing. But phasing can be disorienting at first. You may experience nausea, hallucinations, many other psychological disturbances… ‘

Rinako was gazing out of the window, where cadets jogged around the edge of the field. The chorus of their footsteps grew louder each time they passed the lecture hall. She found the muted bark of the drill sergeant’s instructions strangely calming. That and the grass… she could almost smell home.

‘Something on your mind?’

Shock went through her system. The instructor was right beside her.

‘Only you were looking distracted for a moment. Perhaps I’m boring you. Perhaps you’d like to take the class?’

Beyond the instructor she could see the boy from earlier, sneering at her.

‘No ma’am.’ This time her voice was a little tighter.

The instructor frowned. ‘You sound annoyed. Are you annoyed with me?’ She glanced at her name tag. ‘Furukawa.’

Most of the class had now turned to face her, their faces a mixture of interest and glee, like a jumble of two different currencies.

The instructor leant in close. The silver ARPol Academy lettering shone on her shirt. Rinako felt a pressure in her head, as though it was a pane of glass with a heavy weight placed on it. Too heavy a weight.

‘Are you sure? Because it sounds like you want to say something to me.’

The pressure grew more intense, as though the glass had begun to crack, and images refracted in her head: her brothers pushing her over in the grass, her sister with her teddy, taunting her from the hall, jewellery laid out on the table, her parents scolding her, her sister’s smile flickering each time they looked away. The thoughts came all at once, jostling for space in her mind like adverts, adverts in the… she didn’t need this. She could walk out right now.

Then suddenly an image slipped through the fragments. Holding a basket while her mother lifted clothes from it and pinned them to the line. The fabric dancing in the breeze. The zelkova leaves settling, the grass falling still.

The sound of the drill sergeant’s voice returned to her from outside. She looked back at the instructor. ‘No ma’am.’ She said, gently this time.

The instructor looked at her for a few seconds, curiosity passing over her features. Then she straightened. ‘So who can tell me the limit for a rank 12 investigator…’

A forest of hands shot into the air.

Kurama reached up and pulled a handle above him. A rectangular screen flipped open on the dash. He tapped its surface several times then pressed his thumb against it. After a few moments the screen glowed green and there was a loud beep.

Light-Drive Access Authorised. Welcome, Officer <Sato> <Kurama>. How may I -

He shoved the handle back and the screen retracted into the dash.

Rinako stiffened as a series of clicks traversed the car interior. The seams around the doors had all vanished. She was seized by a momentary urge to to dive through the window. Should probably keep that one to herself…

Rinako looked ahead. It seemed nothing had happened at first. Had it worked? Then she noticed the other vehicles seemed to be slowing. The drone of the boosters against the road - which she had barely noticed before - faded and almost total silence fell over them. Outside the other vehicles flickered, then suddenly vanished like smoke in the rain. A moment later they were replaced by a different set of vehicles and the noise of traffic roared back. Only it wasnt just the vehicles. The road now was broader and the skyline ahead completely different, the corporate high-rises of New Nihon replaced by… she squinted out the window. What was this, docklands somewhere? Where the river had been was now a concrete desert. The sound of rain pattered against the car roof like a thousand soft bullets. She wondered if the toothpaste girl had disappeared too. At least the doors had reappeared. The flying tomb thing wasn’t really for her.

‘Drak.’ Kurama was peering out the windscreen ‘How come we always get called out to where it’s pissing down…’

A low whine came from the skimmer on the dash. The little silver dome of its head ascended exposing the black band of its sensor array.

Rinako felt her hands relax their grip on the seat. She hadnt realised she’d been clutching it. It was a far cry from Gokayama. There the closest she’d come to phasing was when she’d fallen asleep out in the barn and woken up in the middle of the night with no idea where she was.

There was another crackle from the radio. ‘Listen, be careful Sato. Looks like this one’s Bright4. Clipped someone pretty bad over near Shibuya.’

Kurama lifted the receiver and held the button. ‘When have I ever not been careful?’

There was a period of silence.

He pressed the button again. ‘I mean apart from those times…’

The voice came back, softer this time. ‘I’m serious. This isn’t just a shoot and loot. Made a real mess of this woman according to the ARP units. As in she wont be filing anywhere for compensation.’

‘Hey. That’s our job right…’ This time, when he released the button on the receiver there was no static. He eyed it like it was some foreign creature he had found in his clothes, frowned, jabbed the button several more times then tossed it to the floor among the discarded takeaway packets. ‘Piece of junk.’

A low whine came from the dome on the dash.

‘Not you pal.’ He thumbed the accelerator and the concrete desert began to fly past them. Then, more quietly: ‘You’re about the only thing here that isn’t.’ 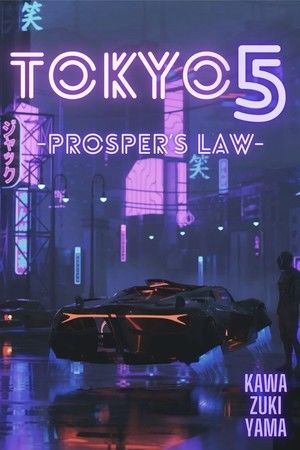