Under the cold skies of July winter, on a dense pine forest, a young girl in violet coat walked alone, tied on the back of her head were a polka dot ribbon. She carried with her a satchel bag, and an assault rifle that was obviously too big for her size, slinged on to her body.Bookmark here

She lurked among the trees, carefully choosing her steps as not to make noise, for noises would alert the prey to her presence. On the other side, a deer with its fawn is grazing what little grass available, a perfect prey.Bookmark here

She regulated her breath, emitting a cold vapour with each breath. After a moment of wait, she deemed it the right time to take the shot, she raised the four kilograms rifle up and take aim in a prone position, her chin could feel the freezing cold buttock of the rifle.Bookmark here

She lined up her eyes with the iron sight of the rifle so that the deer’s head lies right at the thin iron crosshair, she took a deep breath, held it, and pulled the trigger.Bookmark here

She shot thrice, with the recoil of the rifle crashing against her small shoulder harshly each time. Consecutive loud bangs accompanied by a bright flash brought the deer down, the fawn immediately flee into the woods.Bookmark here

She whispered as she stood up, and slowly walked to the now dead deerBookmark here

She stared at her prize, two hits on the head, one of them missed apparently, probably the last one as the recoil most likely foiled her accuracy.Bookmark here

The deer’s head was tilted up above, it’s eyes seemingly looked at her. The cold, lifeless eyes resembles an accusing look, taunting her. Its head was lolling and unwaveringly. The moist black nose pointed to her direction; the eyes pierced through her very soul. She could feel something sizzling against the other side of her lips.Bookmark here

She wiped off the smudge from her lips and stared back indifferently. Bookmark here

“Am not…sorry.” She breathed as she pick up the head and moved away. Bookmark here

Her eyes were downcast for the rest of the timeBookmark here

Opening her satchel, she grabbed a rope and hung it around the deer’s body so that she could transport it more easily.Bookmark here

It took her a while and when she’s done, she dragged it along. Whilst doing that, she spotted the fawn on the woods, staring at its parent's lifeless body. It was that typical animal look. A wide eyed, hard to read expression. It looked as if its heart’s stood still for a moment.Bookmark here

And as she was dragging the deer, the fawn, on instinct, seemed to make a turn and started running towards the back of the woods. Running away from the terror that has killed its parents. She felt pity on it, but continued dragging it along, her mind drifted back to her lost parent, for a moment she couldn’t recall her mother’s face but somewhere in her mind, there’s an image of her mother.Bookmark here

She looked back, the fawn is now lost, hiding in the dense trees. She turned back again, but didn’t see it. Her heart thumped against her chest for a brief moment, and a little pain shot up through her belly Bookmark here

She dropped the rope and raised her rifle. Faint sibilant noises could be heard coming from the fawn’s last direction. It sounds like a rabid beast gnawing on its feast.Bookmark here

Wolves, most likely, and they were probably attracted by the echoing sound of her rifle. She abandoned the deer she was dragging, and slowly walked back several paces to get away. But alas, her feet touched a branch and made a loud cracking sound. Attracting the wolf’s attention.Bookmark here

As it emerged from the trees, she frantically started shooting at it with both eyes open wide. The first two shots hit its head. The wolf fell down on the ground, unmoving. But it is clear that more are coming.Bookmark here

She breathes hard, and started to run. She run aimlessly ahead, dodging any obstacles on her path, her rifle and her satchel bag shook violently on her shoulder, until eventually, she stopped.Bookmark here

What lies beyond her crushed her hope. It was a large, deep abyss.Bookmark here

A dead end for her.Bookmark here

She could hear the growl of the wolves chasing her down, on the split second that followed, she decided to take cover near a fallen tree, and stood her ground, she readied her rifle.Bookmark here

When she sighted the first movement among the woods, she opened fire without hesitation, killing not only one, but three wolves as they tried to rush her.Bookmark here

The recoil of the rifle gradually overwhelms her as her shooting pattern becomes more and more erratic. Two of the wolves had flanked her on both sides. she killed the one on the right. But before she could swing her rifle the other way around. she felt the wind whistling past her. She opened her eyes to see the wolf coming straight for her.
Bookmark here

The wolf growled, and jumped on her back. Sinking its claws deep into her shoulders, and holding her tight. it pressed its hot, rough breath onto her arm, forcing a strong panic attack on her. Her reflexes dictates that she fired a shot and she did. At point blank range, it killed the wolf, but as it had already jumped, it crashed onto her.Bookmark here

Her small, frail body was pushed back. A major problem, as her improvised entrenched position is no more than two meters away from the edge of the abyss. When the wolf struck at her with full momentum, She was pushed several step back, eventually causing her to lost her footing to the ground. She slipped, and fell towards the dark, endless abyss.Bookmark here

“No! No! This can’t be happening, I cannot die! God please! I don’t want to die!”Bookmark here

As she was falling down the abyss with the dead wolf, she thought of her home, the orphanage, and all of her little siblings that eagerly awaits her return.Bookmark here

Ever since all the adults died, she had single-handedly cared for the children on the orphanage, being the oldest one around. She acts as their beloved older sister. She loved them as much as they loved her.Bookmark here

If she dies, what will become of them?Bookmark here

Who will take care of them?Bookmark here

Who will feed them?Bookmark here

Who will clean up their dirty clothes?Bookmark here

Who will recite bedtime stories for them?Bookmark here

Who will… who will…Bookmark here

Countless line of thoughts flashes on to her mind on a short span of time, of her younger siblings back home. She has already lost so many of them.Bookmark here

What will become of them? Bookmark here

What will become of all the orphans now?Bookmark here

Is anyone coming to their rescue?Bookmark here

No. She has no time to wait for their savior. She may not even live to see the salvation of the rest of them. She was in a single fatal situation in an unforgiving place and at a singularly bad time.Bookmark here

She do not want to imagine what would happen if she fail to show up on the front door the next morning.Bookmark here

It’s all because of the wolves.Bookmark here

And then a suddenly, the wolf's head tugged around, seemingly coming back to life.Bookmark here

Bizzare is an understatement of this situation. She could barely mount an answer because of the force pulling her down towards the abyss, but the wolf kept talking.Bookmark here

She looked at the wolf that caused her all of this with anger. she hasn't accepted it yet, but deep down, she knew she's probably going to die. Bookmark here

What, a talking wolf carcass? she probably has lost her mind.Bookmark here

What? What is it trying to say?Bookmark here

Ignoring the blabbering of the dead wolf, something doesn't feel right.Bookmark here

She's been falling down for quite some times. and the blood withdrawal started to drain her consciousness.Bookmark here

in a last-ditch effort, she grabbed the wolf, turned her body and adjusted it so that the dead wolf would absorb all the impact of the fall before her. Effectively turning the wolf into a landing pad, it probably wouldn’t do much, but she had to hope.Bookmark here

The ground was coming towards her fast. Bookmark here

She was about to die.Bookmark here

Then, something began to look off in the corner of her eyes. blurred by her velocity downward, but as she went down, it became clear. surrounding her were bioluminescent plants of some sort that grew on the abyss's walls. it grew thicker as she fell deeper. And then she could feel herself grazed by something, something soft but thorny, it also made crackling, sounds… tree branches.Bookmark here

It didn’t stop her, but she felt her velocity was significantly impended by it. Fortunately for her, when she hit the ground, it was rather soft, she fell onto a bush accompanied by the sound of crackling branches, and a loud squirt.Bookmark here

at great heights, the impact caused great pain, she had a momentary concussion which made her vision all fuzzy. Bookmark here

when all is clear, she saw that the wolf carcass had spat out all its innards, she cringed, and jumped back, leaning back opposite to it.Bookmark here

She tried to regulate her chaotic heavy breathing, the events that just unfolded was a little too much for her undeveloped body, she looked around her, it’s dark, the ash clouds that blocked the sun didn’t help either.Bookmark here

It goes without saying.Bookmark here

She is now trapped inside the abyss.Bookmark here 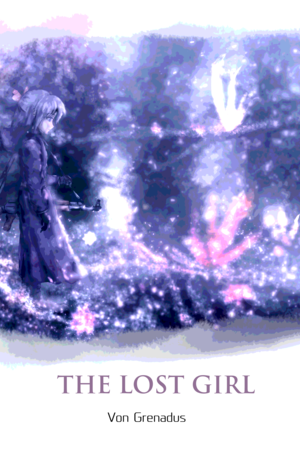