The high noon sun cast its warm rays through the treetops. The beaten trail was lost in the wilderness after centuries of abandonment. Extendo led the way, following the sun as a guide. Enne’s steps treaded quietly on the dirt, fixated on the scenery ahead. A few hours had passed since the skirmish with the Ethoxians. Alejandro’s pulse remained steady, but sweat drenched his body. She was worried his wound was worse than she thought, only compounding with the sickness he already had. The wanderer stopped at the subsequent descent.

“I’m surprised we haven’t seen any rebels on patrol yet,” Enne said, monitoring Alejandro’s state. “We need to find a place so I can focus on him.”

“How’s he looking?” Extendo looked over.

“There isn’t much my mana can do. Are we close?”

“It’s not too far away from here.” The wanderer pointed at the ridge. “There’s a cave system nearby. That’s where they are.”

“Yeah…” Enne agreed. “Hopefully, they can tell who we are.”

“That can tell the difference between friend or foe?” Enne asked. The wanderer was hesitant to reply.

“I mean, they wouldn’t just shoot at us.”

Extendo caught up to lead the way as they descended the slope. Much of it had been stripped of its safety fences. The curved path kept to the west before curving to the north again. It was a sea of greenery in mountainous Appalachia. Enne felt the sun’s warmth against her skin. She’d take a whiff of the untouched environment’s aromatic scent. Her ears perked to the organized movement ahead. Her eyes fixated across where they were, discovering a reflective lens hiding in the trees.

Multiple shots disturbed the silence. Roosting birds flew into the sky. Enne caught the bullet, examining it before swinging it to the ground. They fired on her position again. She slid behind a nearby tree, ensuring Alejandro wasn’t in view. Extendo and Salem looked over from further down.

“I thought you said they wouldn’t shoot!” Enne growled. Extendo shrugged his shoulders.

“The hell do you mean? Aren’t you their supplier?”

“Yes, but I come by truck, and they have a lot of fresh-faced recruits. They could be trigger-happy!”

“Easy there, En.” Salem sighed. “Not everyone here is bulletproof!”

“We gotta play it cool,” Extendo said. “Maybe something happened.”

“Half-elf!” Enne reminded. “And Raquel should’ve already made them aware of me coming. Ugh… How about this: You two take Allie, and I’ll get them off your tail.”

“Exactly what good does that do us?” Salem asked. A bullet broke a chunk of wood from a nearby tree. Everyone looked, tightening their lips for a moment.

“They won’t shoot you by accident,” Enne finally said.

“That’s your plan?” Extendo asked. He glanced over with a twisted grimace.

“I could play dead until the snipers are dead,” Enne suggested. Salem frowned with narrowed eyes. “I can technically hibernate! I did that a few times when I was younger—”

“Whoa, whoa! That’s so stupid!” she replied. “That would never work in any situation.”

“Are we being serious right now?” Extendo chimed.

“But you’ll make it through!”

“How can someone so smart come up with a dumb fucking suggestion?”

Salem refrained from rolling her eyes when she ground her teeth. Another barrage of bullets tore through the barks and low vegetation. They looked at each as pieces flew until the gunfire ceased.

“You two have to get close,” Enne continued.

“Are you serious about staying behind?” Extendo asked.

“They don’t know their bullets can’t kill me… They’re just annoying… Like stepping on legos.”

Salem’s deadpan face lingered before shifting her attention to Extendo. Before he could agree, Enne sprung toward them, leaving Alejandro in the wanderer’s arms. The half-elf stood over them, looking at him one last time. They stood up and hurried behind cover.

“Make sure he makes it over,” she said before stepping out in the open. “This is about to hurt.”

Another shot rang out. Enne caught the bullet but threw herself into a collapsed motion as though she were struck. She lay on the grass and regulated her breathing. They kept firing until they had to reload. Enne waited. Though the bullets couldn’t harm her, they did hurt. She hoped that it wouldn’t be on her soft skin but the draconic scales that covered her body if they shot. When they fired again, another bullet struck her scaley thigh. Enne held her breath after absorbing the hit.

She waited a few minutes, not moving a muscle as her ears wobbled subtly in their direction. Some began scoping out the others. Enne had planned to catch them by surprise.

Crap, I need to get closer. Enne, playing her part, wobbled to her feet while clenching her chest. It wasn’t long before they fired on her position. Though she anticipated catching the bullet, she failed, feeling the full brunt of the shell in her chest.

The tightening pressure sent her stumbling forward; No action was required. Enne haphazardly tumbled down, slamming into stumps and thorny vegetation. She grit her teeth, losing sight of their position. Once she knew she was harder to see, Enne caught her footing but still managed to roll forward before laying flat on her back. Her eyes traced the clouds from the spacious view between the branches. A deep breath left her lips. She smiled at the sight of a T-Rex-shaped cloud. Enne reminisced on the times she watched the clouds with her mother.

I wish I could, but Allie needs me. She thought to herself.

Enne slowly staggered onto her feet. The bullet’s impact left a reddened bruise on her chest. As the dull pain subsided, she honed in on the shooter’s position. Up the slope, she could discern movement moving to the side of the ridge. They’ve yet to fire on the other three, meaning either they’ve yet to spot them or they were more concerned about her. Enne dashed through, jumping against a tree for momentum as she scaled against a sharp incline. Her ears perked to their subtle change in pace, but they kept to the other end. Enne eventually landed nearby, finally able to discern their voices. She pressed her body against a tree, looking over to listen.

“There’s still a disruption,” one said with a distinct voice. “We can’t detect the others because of it.”

“We only caught their movement until that disturbance.”

“Shit, this ain’t good!” another one said. “We—we’ve been infiltrated!”

“Will you shut the hell up, Lloyd? It was one elf! We need to report back otherwise.”

“How about that explosion from earlier?”

Enne continued listening, hearing their movements drift away from one another gradually. There were 5 in all, two approaching her vicinity. She remembered what the dying Ethoxian soldier said, wondering whether she was the source. It was more than a coincidence she was able to throw off her pursuers. The rooftops in Frederick and the Ethoxian hover bikes that passed by came to mind. Footsteps approached her position as she doted. When they were within her peripheral sight, she bent the gun’s muzzle and delivered a headbutt against their head.

After checking their pulse, she moved him into the brush and quickly proceeded to the other. She dug her fingers into a tree and climbed it with a single leap, putting her out of sight of the adjacent soldier. Their gun rattled after hearing the rustling tree. His panting and heart raced as he got closer. He got close to where she hid his unconscious comrade, but he stopped short when she tossed something into another bush. He didn’t shoot as she anticipated, but he was too scared to call for the others. Unbeknownst to him, she leaped to another tree and pounced at him.

It only took a knee to the back and muffled his cries into the bundled leaves to subdue him. His gun slid over as he tried desperately to reach it until she choked him unconscious. She rechecked his pulse and broke the weapon he had before she pressed forward.

“If it were Ethoxians, they wouldn’t send one person!” the distinct voice said.

Enne reached where the other rebels were. A rebel stood to her left behind a medium-sized bush. Their back was turned away from her while listening to a dwarf’s chatter. The stout figure rambled while stroking his bushy beard. Enne snatched the rebel as she threw him into a chokehold. She slammed him to the ground when he struggled too much, instantly knocking him out. The dwarf glanced over at the settling bushes. Enne had ducked out of sight, holding her breath.

“You can come on out,” the dwarf muttered. Enne didn’t comply. “All ready then….”

“I only knocked them out,” Enne shouted. The dwarf listened. “I might’ve hurt them a little, but they should be okay. Your people shot at mine. We were just passing through.”

“Who are the others?”

“First… Tell me who you are, and tell Lloyd not to try anything funny.”

“Lloyd,” McCreary ordered, looking at him through the side of his eye. “Let’s work with the little lady. My name is McCreary, a squad leader with the rebels. Now, Lloyd. Come on.”

Lloyd stopped at the tree, lowering this barrel. The man was in his early-20s with clothes that had seen better days. Enne listened as the young man stood next to his leader. When she felt comfortable, she stood up. They exchanged glances, though both were reluctant to say anything. The dwarf immediately noticed the bruising on her chest.

“You—survived that?” he asked. Enne nodded. “A bulletproof elf?… Or Elph?”

“What’s the difference?” she asked. She emerged, revealing her draconic markings throughout her body. Her exposed thigh, fingers tips, and facial marking stood out immediately, but McCreary didn’t bat an eye.

“The difference is between friend and foe. And our enemies don’t look like you.”

“My people have fought against Ethoxian oppression.”

“How much do you know about your family’s crest?”

Enne looked down at her chest and saw the faint protective sigil on the black fabric. He walked over to shake her hand when she looked at him again. Enne reached out to his, feeling his firm grip before shaking his hand.

“It is an honor to meet the descendant of Nuri,” he smiled.

The dwarf’s grace was sincere.

Enne is a step closer to the answers she's sought after. Please leave a like. A comment/feedback is always appreciated! :3 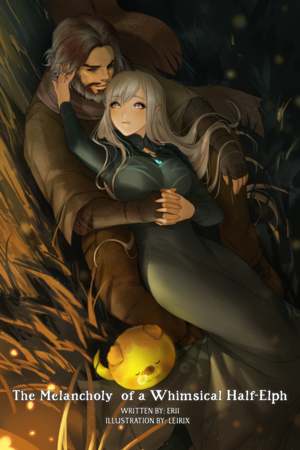