Interlude One: To Be A Leader

The first time my brother brought me to the agency, I thought he was stoned as hell. I mean, like, come on. Me? A hero—and a super one at that? All James Hinata was good for was running the 100 on the track. Why did it matter if I was born with the same skill as my great-great-grandfather, the leader of the Shadow Garden in feudal Japan? Bookmark here

I didn’t use it often, but at some point after reaching middle school, I could make items just…vanish. Well actually, it was more like I moved them from one area to another. At the time I could only link one mark with an object, but after working under Nighwatcher for a year on weekends, I could designate five different locations.Bookmark here

Before I knew it, I was studying and competing during the day, catching crooks and fighting hand to hand with actual super villains at night. It was crazy as hell.Bookmark here

My brother was beyond ecstatic to see my name jumping up on the rating charts. I met a lot of cool people, as well. Master said I was a natural when it came to martial arts, and my speed was unparalleled when it came to jumping around after “blinking” as I liked to call my ability. Bookmark here

My older brother had picked out my hero name as well—Seven Star Ninja Kage. It was pretty cringe, but I really appreciated the dedication he had and his passion for helping others. Without him, I never would have been able to graduate high school and go straight into helping master make LA a better place for not just people like us, but everyone. I jumped up to the A-Tier heroes in only two years. They were the ones that made the big bucks. The ones that got television coverage and ad placement. I even had a proposition for an action figure, but I was too embarrassed to actually go through with it, despite my brother's affectionate cajoling for me to do it.Bookmark here

Sometimes, when I would prowl the city from the highest of buildings, I would think back to how my family felt about all of it. My parents wanted me to either go all the way with Track or go to medical school like my brother was. My father was furious when he heard I wasn't planning on attending college, but mom reassured him that I was following in the footsteps of the Hinata Clan—even if how I did things were a little bit different than how it was back then. Bookmark here

I never killed anyone, despite wielding the family heirloom, Murasame, or “Autumn Rain”. It was a bit scary to use at first, but great when dealing with scaly or fast-healing foes. Needless to say, we became best friends right off the bat.Bookmark here

At some point, I passed Master in popularity and ended up leaving his agency and starting my own. I was in my early twenties then, and it wasn’t long after that that I got utterly annihilated.Bookmark here

I’ll never forget the day. I was training a special newbie while running across the rooftops when I got a notification on my phone. S-tier Threat! All heroes in the vicinity, please come immediately.Bookmark here

With my new apprentice, who had begged me to take him on, the two of us made a dash for Clover Park, where a large monster had appeared from nowhere. A bad feeling lurked in my heart for my family, but this was part of the condition of leading a hero's life. Besides, he was just as well trained as I. Who cared if he didn’t have a special ability? Bookmark here

He was scaly, spikey, purple, and had multiple eyes on each side of his ugly face. He really reminded me of a playable villain from a hunting game. Dragonoid and The Watcher were already on the scene, so I decided to play backline and observe.Bookmark here

“What the hell is happening?”Bookmark here

“I don’t know, Master, but the creature’s skin seems to be…adapting to Dragonoid’s flames… How can this be?”Bookmark here

The Watcher couldn’t incapacitate him either. And as if to counter Dragonoid’s attack, a torrent of water beamed out from the creature’s chest, overpowering Dragonoid’s flames and knocking him unconscious. The Watcher wasn’t as lucky. Even though their eyes met, the beast continued over to him, gobbling up any human unlucky enough to not have escaped. Bookmark here

Were those not its real eyes? I wondered. Like the wings of a butterfly or other creatures of that sort. It seemed more likely than his ability not working. That pale guy could stun anything with his gaze.Bookmark here

I tossed a shuriken with my mark on it, but the massive tail of the creature swatted it way out of the way. Just how quick was its reaction time?Bookmark here

I could try again, but I thought otherwise. He needed our help.Bookmark here

“Right behind you, Master.”Bookmark here

“I’ll fire bomb its jaw, while you deploy acid traps around its legs. That should occupy it.”Bookmark here

“On it! I’ll distract it!”Bookmark here

We had a solid plan to take it out. Murasame was still as sharp as ever, and I even just coated it with a paralyzing poison. Nothing could go wrong.Bookmark here

Or so I thought…Bookmark here

His bruise-colored skin was as tough as titanium, nearly causing Murasame to shatter in two under its thick hide. He may have been twice my size, but the difference between us felt astronomically larger. I was used to dealing with more human-like foes, so you could say I was out of my element. Mutants were more my style for this kind of thing. Then there were the ones that were sick in the head and only used tech and guns to get their way. I knew that places like France and Japan had their fair share of monster villains, but the same couldn’t be said here.Bookmark here

“Master, stay focused! Follow your training!” my apprentice yelled while dashing around the beast and deploying the traps that would soon melt through the creature’s thick feet, crippling it. Bookmark here

He’s right. I can’t slip up here. People’s lives are at stake. I took the firebombs from my pouch and tossed my rock into the air above. This was one of my finishers against tougher foes. It usually placed them in the hospital for months at a time. I warped myself with the rock, appearing ten feet above the creature who was currently attempting to grab onto my apprentice with its meaty hands. I had seen this method in movies many times, but this was the first time I had tried it in person—a method to truly kill.Bookmark here

“Bottoms up, Goliath!” I confidently shouted as I tossed four small vials of lava-shaded liquid down his slit maw. Its mouth was somehow a lot smaller than the rest of its body… Bookmark here

It took notice of me after engulfing them, the compound lamplight eyes on the side of its head glaring at my weightless body floating through the air. Bookmark here

“GRAAAAAAAWR!” The monstrosity’s face opened up like a Venus flytrap, revealing five sharp piss-colored eyes on each side and a large, gaping orifice. What the hell…? This really is some alien freak!Bookmark here

I could hear the rapid heartbeat of helicopter propellers farther above me as I fell. A news agency, I assumed. It was a good thing the creature was focused on us. If only it wasn't unperturbed by my fire as well. Tough bastard. Just how durable could its skin become?Bookmark here

“Master, the traps are deployed. I’ll wait for you to come down and—”
Bookmark here

“YOU FOOL, RUUUUUN! YOU CAN'T KILL IT WITH NORMAL WEAPONRY” The Watcher shouted as I tossed another rock into the air for a second volley. Bookmark here

My apprentice ignored him, instead, dodging the swipes of its tail and claws to deploy more traps. Not only did they melt down tissue, but they also rooted the enemy in place. Bookmark here

What I failed to notice was the pure violet energy coalescing around the monster’s maw. Just being near it gave me a wild-splitting headache. It reminded me of my brief clash with Extinction a year back. He gave off enough radiation to make someone nearly pass out. Of course, cancer followed for those who survived, but he could cause a lot worse. What I’m getting at is that this fucker was preparing for a radioactive energy beam. Even its body was beginning to ignite with a surge of power. It was a Kaiju! Godzilla for christ's sake!Bookmark here

I processed this all as I plummeted, putting away my weapons. The Watcher had moved back to where Dragonoid had collapsed, while my apprentice was playing cat and mouse with the monster’s clawsBookmark here

“Its toes are puffy and elastic now like a sponge! What the…? It’s absorbing the acid into it! Fascinating, but scary! I’ll leave the rest to you while he chases me!”Bookmark here

I barely acknowledged his words. Time seemed to slow down as I watched everything transpire with a grim visage. Bookmark here

The beam. It’s gonna decimate this whole area. I need to divert it. I need to…Bookmark here

“JAN, GET OUT OF THE—”Bookmark here

The lavender ray of death slammed into the ground below him like a smite from God, stray sparks jumping around like released poison spikes from a dungeon. I couldn’t even see my apprentice under the immense force of the Hammer of Dawn-like imitation. The lotus of death had narrowly missed Dragonoid, instead, trailing towards the parking lot and street. My brain started to tremble as my body shook. My head felt like it was going to split into two. Did I get hit with a stray shot or something?Bookmark here

Another arrow of rogue energy jetted through Watcher’s skull like a bullet. I didn’t even have time to scream in anguish over it all as the empowered claws of the giant horror slapped me miles away. All I could view from my shaking skull and weak limbs was the pure carnage of Clover Park—or what used to be it. It seemed the vestiges of the ray of oblivion had made its rounds all over the lush grass, playground, and vendor areas.Bookmark here

It hurts. It fucking hurts!Bookmark here

All I could do was teleport myself to my last mark—home—if I could even call it that after this. Bookmark here

I woke up days later, and a part of my face seared from the amount of speed the abomination slapped me with. It hurt like a devil had raked across my face with his talons, but not as much as the pain of what I witnessed. My family was all around me, worried and afraid. Dragonoid had survived due to his tough skin, but everyone else there—the locals, children, The Watcher, even the news outlets, had all been devoured by the beams' rebound—and those that weren't would soon perish from the afflicting effects. It was Hiroshima all over again. I somehow avoided that worst-case scenario by an act of god's will... And my apprentice… My only apprentice… Jan. My— AHHHHHHHHHHHH!!!!Bookmark here

And just like that, my loving older brother had disappeared, never to return. Bookmark here 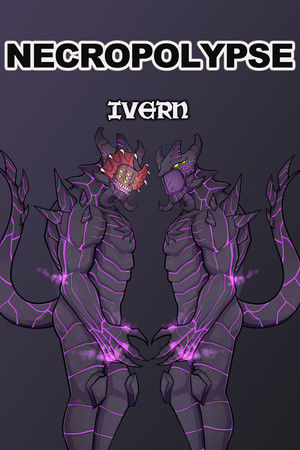