A sold-out pro wrestling arena. The crowd roared in anticipation of the first match. The stage was decorated with chains, iron bars and grey walls with sliding doors that would open when a wrestler made their entrance. The ring mat was painted to look as though it was stained with blood.

The apron had the word "MADHOUSE" splattered on it. The titantron displays the letters P S W in red, purple and blue respectively. The show hadn't properly started yet, so the fans were getting a dark match to warm them up for the actual show.

Just past those sliding doors was the curtain that hid the famed gorilla position where everyone was getting ready for the dark match.

Everyone except for Thompson, who was nowhere to be found.

"Has anybody seen Thompson?!" Asks The Lodestar, the official announcer for the Madhouse. He was a short, slim white man wearing a sleeveless full-body outfit with various black and white patterns all over it. He wore a black hat and a pink plague doctor mask. He speaks with a Welsh accent and his body language showed exasperation, "We need to get a match going right now. Where is he?"

"Haven't seen him since I got here," Said Ishikawa, a tall Japanese man with brown neck-length hair, wearing a black tank top, gloves, boots and blue pants. He chuckles and flexes his arm, "I guess he got cold feet when he found out he'd be facing me,"

"Why does he always do this?" General Manager Palesa Juwaiyra asked. She was a curvy black woman with an afro wearing an orange, fitting pantsuit. She paced around the room with her arms folded.

A security officer came running into the room,

"He's at catering when he's up first?" The Lodestar asked,

GM Juwaiyra extended her hand in confusion, "Why'd you come back without him?"

"He said he wasn't coming until he finished his egg rolls,"

Everyone in the room except Ishikawa, who was obliviously admiring his own physique, collectively facepalmed. GM Juwaiyra lowered her hand and gave the guard a tired glare,

"Go back and get him, please,"

The guard slowly shook his head with wide eyes, “Ma’am, with all due respect, I’m not paid enough to tell that guy what to do,"

GM Juwaiyra suddenly gave him a sympathetic- no, an empathetic look,

"None of us is, Samuel," She placed a hand on his shoulder and gave a reassuring smile, "But someone has to,"

"You know what Ma'am? You're right," said Samuel filled with determination, "I'll drag him here if I have to go,"

"Good. Take backup with you,"

"Yes Ma'am," He turned and headed back to catering with four other guards in tow.

She turned to The Lodestar, "Stall the crowd. Tell them a story,"

He pushed through the curtain and went out to greet the fans,

"Ladies and gentlemen! Boys and girls! I am The Lodestar!"

(That should keep them entertained)

She walked over to a monitor and put on a headset in order to communicate with the commentators, "Alf, there's going to be a delay on the dark match. Linus is stalling the crowd,"

The wisened voice of the lead commentator, Alf Balducci comes through, "Is it Thompson?"

Balducci sighs, "Alright. Thanks for letting me know,"

She looked at the hallway to see the five guards walking with a tall honey-skinned man with black hair wearing a black trench coat over his black and white wrestling attire and sunglasses, holding a plate of egg rolls in one of his taped-up hands, while eating with the other.

GM Juwaiyra clasped her hands together and sighed in relief,

"Thank you. He didn’t give you any trouble, did he?”

GM Juwaiyra frowned and looked up at Simon who stood at 2.13 metres. Juwaiyra was half a metre shorter. He ignored her and continued eating his egg rolls, as she sent the guards away,

He continued to look ahead while eating his egg rolls.

"I've told you before. This is a team effort. Everyone has to do their part…"

He continued to eat his egg rolls. Not hearing a single word she said,

"You can't just wonder about doing as you please…”

He continued eating his egg rolls,

“The fans deserve- You’re not even listening just get out there!”

He wasn’t listening and he wasn’t moving, because he wasn’t done with his egg rolls. Ishikawa, who had finally stopped flexing enough to notice, walked over to them and knocked the plate out of Simon’s hand, breaking it and spilling the remaining egg rolls on the floor.

“Hey,” He snatched the last egg roll out of Simon’s hand and threw it to the floor as well,
“The GM told you to get your ass out there!”

The room became scarily silent. Ishikawa was a big man in his own right standing at 1.96 metres and 116.6 Kilos, but he was dwarfed by Simon who was looking right at him for the first time. Ishikawa continued,

“How about showing your boss and your opponent,” He slapped his chest, “some respect or am I going to have to kick your ass twice in one night?”

Simon raised an eyebrow, looked at Juwaiyra, looked back at Ishikawa, cupped his chin, smiled and nodded as if he was impressed.

After a three-minute “match”, Ishikawa had to be carried out of the ring on a stretcher, while Simon walked back up the ramp to a deafening chorus of boos from the crowd. Without his trench coat and glasses, his chiselled physique and angel wing back tattoo were visible. His handsome rectangular face and green eyes, which were a mix of Northwest European, Southeast Asian and the most soulless, hate-filled expression a human being could possibly make, were also visible. 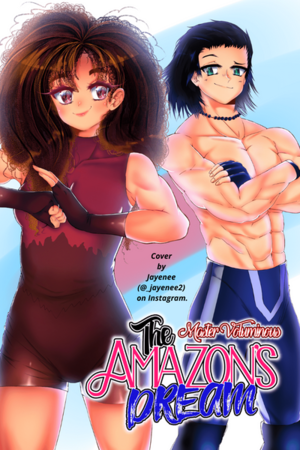