Chapter 1: Where are my clothes?

In Another World with My d20

The teeth of winter gently nibble at her cheeks, a soreness burning in her torso. something simmers in the back of her eyes as she opens them, greeted by a blurry night sky.

A mental fog keeps her from thinking clearly. Only a name is clear: Kathryne.

Kathryne's awareness slowly spreads through the rest of her body. She feels herself limp in someone's arms, her right arms dangling and swaying with each step.

A large pelt fashioned into a cloak rests on her body, keeping her warm from the chilling air.

Is this a dream?

Kathryne's headache fades as she lifts her head, her vision still fuzzy and dry. Blinking, she gets a better picture of the person carrying her.

A woman with sharp features and an intense gaze, shrouded in shadow.

Kathryne reflexively flinches at the woman's voice, surprised by its coarseness.

"I'm-I'm awake." She answers, her own voice dry and parched.

"Hm." The stranger simply responds, the shadows beginning to recede, revealing grey locks of wild hair. "Are you in pain?"

"Ehm-" Kathryne lightly moves each limb to check for injuries. There's a light burning in my torso. Neck feels weird too. "Just a little sore."

Kathryne nods. Although I wouldn't mind being carried a little longer.

The stranger lowers Kathryne's feet to the ground, her toes touching down on an earthy path.

I'm not wearing shoes? Kathryne looks down to try and see her feet, but a sizeable chest blocks her view.

Woah, whose boobs are these?

Brown locks of hair fall into her vision. She reaches up and lightly pulls on it to better inspect the color in the dim moonlight. Did I always have brown hair?

A sudden gust of wind whistles past the two on the road, cold air slithering underneath Kathryne's cloak and brushing against her bare skin. She quickly comes to a worrying realization.

"Where are my clothes? What happened?"

Kathryne turns to the stranger, intent on interrogating her, only to shrink when she realizes how much the stranger towers over her.

Wild, bestial hair drapes over the stranger's broad shoulders, with a sword's silhouette strapped to their back. In the dim light, she notices wolf-like ears protruding from her head, and a row of sharp fangs.

Is- Is that a beast woman?!

The stranger crosses her arms, exerting her presence. "Don't you remember?"

The stranger glares at Kathryne for a while longer, before relenting and turning to the path behind them, scanning the brush. "I was hoping you'd know."

"O-oh.." Kathryne's tense shoulders struggle to relax. She probably wanted to scare me into being honest. "I'm sorry."

"Hm. What do you remember?" The stranger asks, turning back to Kathryne.

"I-" She tries to penetrate through her mental fog, only to be greeted by a swirling chaos of half-memories. "I can't remember anything, except... Kathryne Wyrm? I think that's my name."

"You're not sure?" The stranger asks, only to be answered with a shaking head. She muses for a moment, before reaching into a pouch trapped to her belt. "I'm Wolfgang."

"Wolfgang?" Kathryne repeats the name to better remember, looking to the cloak draped around her own shoulders. It's far too long, and made from a wolf's hide. I guess the name is fitting.

"Did you lend me your cloak?"

"Hm." Wolfgang grunts as she pulls out another bag from within her pouch, holding it out to Kathryne. "This is yours. I hope you packed spare clothes."

Kathryne gingerly takes the belt, inspecting the pack about the size of a large book. "Do you know what happened to what I was already wearing?"

At least, I hope I already had clothes. I don't want to find out I'm a nudist.

Wolfgang tightens her lips. "Change first. I'll tell you what I know."

Kathryne sighs through her nose. "Okay." She looks around at their surroundings, seeing if there was anywhere private.

A forest of winding trees surround them on all sides, the full canopy leaving a fog of deep shadows. A few islands of moonlight illuminate the grassy floor.

Kathryne swallows nervously, feeling like a creature lurks behind every trunk. She didn't feel safe going off alone to change. "Do you have a light on you?"

The darkness makes it hard to see exactly what Wolfgang does in response, their vague shape opening one of the pouches on their waist and pulling an item out. Her fingers quickly work with a glass vial, shaking it around to produce a bright, green hue.

"Woah..." Kathryne reaches out to take the vial on her hand, looking it over. "What is this?"

"Oh, yeah." Kathryne sticks the tube on the branch of a nearby tree and flips the flap of her bag open. She reaches inside, hoping for some spare clothes.

Woah, it's deeper than it looks. What's in here anyway?

Kathryne pulls out a green... cloth? It felt too rough between the fingers, almost like canvas. She pulls out the entire length of a tarp, dragging out a few wooden poles as well before dropping the entire thing on the ground.

Wolfgang stares at the item on the floor. "Yes."

"Is this-" Kathryne moves the bag closer to the light, stretching the entrance to peer inside. "It's bigger on the inside!"

Inside of the bag was a neatly organized array of pockets and gear, many of the items much bigger than the bag itself. Most prominently, a large tome was snug in its own sleeve, and deeper within was a bed of larger items that don't fit in the surrounding pockets, like a bedroll and rope.

Kathryne pulls out the sleeve of a blue tunic in awe. "What kind of bag is this?"

Recognition sparks within Kathryne's mind, an instinctual knowledge breaking through the echoes of her memories. "A Handysack? That's an item from Wrathfinder."

Wolfgang shrugs, patting her pouch. "I don't know where you got yours. Mine was a gift."

Kathryne tries to remember more, but the recognition quickly dissipates. "Never mind." She continues to rummage through her bag, grabbing a pile of clothes to make her decent.

She fumbles with the clasp of her cloak before handing it to Wolfgang. "Could you hold this up? And don't look."

Wolfgang quietly lifts the cloak to form a makeshift curtain and turns her head away, scanning the darkness for any threats.

"So, what did you see?" Kathryne asks, working on dressing herself in warm clothes.

"My eyes are turned away."

"Hm." Wolfgang lightly sniffs the air, detecting a familiar scent upwind. Too far to matter. "I was with two merchants when I saw a flash of light in the forest. I came to investigate, and I found you, lying in a pool of blood."

"Your clothes were torn to shreds, but when I checked you for wounds, you didn't have any.  I even removed your clothes to make sure."

Kathryne pauses upon hearing the dire news, quickly checking herself for any injuries. I'm sore, but I don't see any cuts or scars.

She does spot a black ring wrapped around her index finger. Where a gem might be resting in a girdle instead bulged with a glossy eye, observing its surroundings.

Oh, gross! Kathryne tries to pry the ring off with no success, the eye seemingly offended by the attempt.

Wolfgang continues, paying no mind to whatever struggles Kathryne is having with her attire. "I could smell rotting sap, so I carried you out in case anything would come by."

"Thank you." Kathryne huffs at her failure removing the creepy ring, pulling the cloak aside. She adjusts the blue tunic to avoid feeling tight on her chest. "Are you sure it was blood? Maybe it was the sap you mentioned?"

Wolfgang shakes her head, swinging the cloak around her shoulders. "If it were sap, you would've been covered in it. I have the dress if you want to check." She retrieves a large, shredded cloth from her pouch, caked in a dark liquid.

Kathryne takes the cloth in her hands, bringing it closer to the glow tube to- Yup, that's blood.

The edges were jagged, as if there were many small claws ripping away at its front. Judging by the stains, it's obvious that someone was still in the dress when it was being attacked.

Kathryne shudders as her fingers inspect the surface of the dress, discovering a strange incision on the back, a few inches in length and too fine for a claw.

Was I stabbed in the back?

"Okay, so it is blood, but shouldn't I have some sort of wound?"

"You either healed yourself or someone else did." Wolfgang shrugs. "To make a light that bright, it must have been powerful magic. Likely spooked away the creatures, too."

From the way Wolfgang speaks, it sounds like the existence of magic was but a mere fact.

I mean... of course, why wouldn't magic be real?

Wolfgang leans down, getting in Kathryne's personal space and sniffing. "I can't make sense of your scent. Can you remember if anyone was with you?"

"Really, I don't remember anything." Kathryne nervously chuckles, anxious about Wolfgang's teeth. Her eyes wander towards the sky when her breath gets caught in her chest.

Past the shadowed canopy of leaves was a familiar orb of moonlight, only its surface cracked like a broken plate. Several jagged meteorites leave silver trails as they orbit the moon.

And beyond even the moon was another celestial ball, wreathed in shadows and lurking behind the twinkling sky.

Wolfgang follows Kathryne's gaze to the moon, then returns with a muddled look. "What?"

Wolfgang takes another look at the moon, then starts to check Kathryne's head for lumps. "You must have taken a hit to the head."

"I'm fine! I- gah!" Kathryne squirms in Wolfgang's grasp, getting hair in her face.

Suddenly, a strange hum brings Kathryne's attention to her ring. Number spin within the eye's iris, before prominently highlighting a 17.

Wolfgang's ears flicker to the shadows behind them, her head turning to follow. Furrowing her brow, she grabs the glow tube and watches for a few moments.

Kathryne takes a nervous step behind Wolfgang, unsure of what the beast woman heard. Her eyes squint into the darkness, barely catching a gnarled limb dashing across a puddle of moonlight.

She freezes, clinging to Wolfgang's cloak. "Wh-what was that?!"

The ring begins to hum again, spinning, rolling a 19.

What's with the numbers?!

Wolfgang twirls the vial of light between her fingers, before sending it flying through the air with a powerful throw. It shatters upon its target in the darkness, the splatter of luminescence revealing a trio of hideous creatures.

Three toddler-sized monsters wield crude stone tools, maniacally chittering and creaking to each other. They looked like sickly tree stumps, amber-like crystals jutting out of their stumpy heads as their barks twist into malicious grins.

Two of the creatures laugh and jeer at the one struck by the vial, who babbles hateful noises at Wolfgang. The beast woman responds with only a snarl. 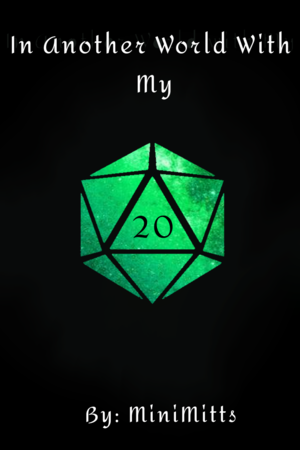 In Another World with My d20