Is It Still Incest If Siblings Reincarnate With No Blood Relation?

Sora Sakuba instantly awoke to the sound of a rooster’s crowing. It echoed throughout the farmlands at the crack of dawn. Sitting up, he processed everything around him. A dim-lit room with bland off-white walls and maple hardwood flooring, a simple mattress with black bedsheets and matching pillow, and an old mahogany wooden desk with a black leather bound book. Getting out bed, Sora made his way over to the desk and opened the notebook. Turning the pages, he looked over the different entries and dates until he found the page he was looking for. On the page was the date, followed by a small list of tasks to do around the farm. Once he was finished making a mental note of everything to do, he proceeded to change into his work clothes – a simple white shirt and blue overalls.

Exiting his room and knocking on the door across the hall, Sora waited for his little sister to open the door. For a moment, there was was silence until the door opened. Standing in the doorway was Riku who looked as if she had just gotten out of bed. Her long blond hair was messy and showed no signs of grooming while her sleepwear consisted of nothing more than a pink short sleeve top and matching panties. Her green eyes stared back at her brother’s before she let out a yawn.

— You need to learn to go to sleep earlier, little sis.

— Something tells me you’re going to go back to sleep.

Without saying another word, Riku closed the door behind her and yawned once more. She knew that she would have to do her part in order to help her brother on the farm. While he took care of the hard labour work on the farmlands, she would take care of the cooking and other small tasks. Although she didn’t help out in the fields much, due to her fragile body, she did occasionally pick fruits and plant seeds for some of the crops. Taking a second to wake herself up to the world of the morning sun, Riku grabbed a simple white tee-shirt and a pair of blue jean short-shorts that revealed her bare legs for all to see. Exiting into the hallway, she made her way to the bathroom. Stripping naked revealed her bare breast that were perfectly shaped in a way that she would have been a popular girl, if she had gone to school.

Stepping into the shower and allowing the water to rain down on her body, she recalled how both she and her brother were forced to quit school in order to work on the farm their parents owned. Everyday, her mind remembered that tragic event that took their parent’s life. She cried every morning in the shower to hide the tears of what she had done. It was all her fault – at least that what she believed. Of course, her brother didn’t blame her and instead placed the blame on himself. Yet, this didn’t change the fact that their parents were dead and they now had to take care of matters on the farm. All they had was each other.

Finishing up her shower and throwing on the clothes she had picked out, Riku headed into the kitchen to see her brother looking over a newspaper. Taking a moment to wash her hands, she began cooking breakfast consisting of bacon, eggs, sausage and a glass of milk. After finishing and placing the plate of food down on the table, her brother quickly shoved the food into his mouth while she sat down at the table across from him. She smiled as she watched her brother enjoy the meal – even if it wasn’t much.

— So, what’s on the list of chores for today? Riku asked as she took a bite of the strip of bacon.

— We need to harvest the wheat today.

Riku froze at the words her brother had said.

The two of them ate their breakfast in silence. Once they were finished, Sora headed for the front door while Riku washed the plates.

— When you’re done in the kitchen, do you mind checking on the other crops while I inspect the farm equipment?

Riku finished up with cleaning the plates and headed to front door. Slipping on a simple pair of pink flip-flops, she headed outside. The landscape was a vast field for many kilometres with trees that could barely be made out at the horizon. Various crops had been planted several metres from the farmhouse with the wheat field being planted to the east. Riku headed west to where the smaller fields of tomatoes, potatoes, corn and such were planted. Checking each of the fields, she made sure all of them were healthy and ready to be picked of the vines of the plants.

Once she was finished, she made her way over to a large building to the north where all the farming equipment was kept. She could see her brother was busy checking the green destroyer of life and making sure there wasn’t anything wrong with the machinery. For a moment, she couldn’t help but lose her train thought as she looked over the machine.

— All right, everything looks fine so I’ll take it out and get it in position. We can then check the wheat field before harvesting the wheat.

Riku took a few steps back and covered her ears as she tried to ignore the sounds of the engine. She made her way over to the wheat field as Sora drove the combine harvester and parked it at the place where they would start harvesting. Exiting the green machine, Riku watched as her brother jumped down from the machine.

— Are you sure you should be leaving that thing running while we check the fields?

— It’ll be fine. We need to be quick because I noticed there were some dark clouds in the distance coming from the south.

Without another word, Sora headed into the wheat fields to check for anything in the fields that shouldn’t have been there. Riku sighed and followed behind her brother, checking the ground for any holes or large roots that could mess up the machine while it harvested the wheat. Once they had reached the end of the field, Sora turned to his sister.

— I think we can do another row before the storm. I’ll check it out. If you want, you can check the third row for tomorrow.

— Don’t you think one row is more than enough?

— It should be fine, Sora said as he headed over to the other row.

Riku headed over to the third row and checked the wheat as well as the ground around her. Before she could finish her inspection of the field, she heard her brother call out to her. Rushing through the thick field of wheat – following the sound of her brother’s voice – she found that his leg had fallen into a small pothole.

— Are you okay, brother? Riku asked.

— Aside from a twisted ankle, I’m great.

Helping her brother out of the hole, Riku tried her best to carry him back to the farmhouse. As she struggled to keep him steady, she could hear a sound in the distance that was starting to get closer.

— Probably the storm in the distance.

The sound continued to grow louder as Riku tried to figure out what was making it. Without paying attention to the ground, she quickly found herself falling forward into the dirt along with her brother. Taking a second to realise what had happened, she noticed her flip-flop had got caught on a root.

— No, I’m fine. I think I sprained my ankle slightly but it’s fine.

Before Riku could grab her shoe, she realised the sound was getting louder to the point it was now clear what she was hearing. Turning to the direction of the sound, she could see the combine harvester heading straight for her and her brother. In that moment, Riku froze.

The combine harvester continued to head for the two of them, closing the distance due to Riku’s momentary pause of fear. She recalled the face of her mother before it was lost forever in the belly of the beast before her.

In that moment, Riku returned to the world and helped her brother his feet. Not wasting any more time, the two of them tried to run away from the machine that would rip them to shreds if they didn’t get out of its warpath. Riku could hear the whirling of the machine echo throughout her ears with it being hot on her heels. Yet, the fear only intensified when Riku stepped into the pothole that twisted her brother’s ankle.

Sora and Riku both closed their eyes as the abyss of death took both of them. 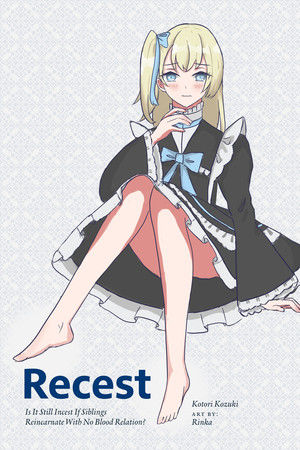 Is It Still Incest If Siblings Reincarnate With No Blood Relation?