Jiyu is completely worn out. He lost alot of blood in the final battle and it seems like they won. Jiyu takes a look around him. "Akuto!" he says.

Akuto tries to move his hand, but he realizes that the connection between his hand and brain is lost. He is on the verge of death and he will most likely die at any moment from now on. Akuto tries to talk. "It seems like these are my final moments.." Jiyu starts sobbing. "It has been a journey hasn't it? Jiyu..". Those words from Akuto make Jiyu tear up even more. "Akuto, please stop talking, I beg you.. Don't die on me..".

Akuto looks at Jiyu. "Its alright.. I have nothing to lose anymore. I've been through hell". Jiyu can't bring himself to listen to these words of Akuto. "AKUTO! PLEASE DON'T TALK.. YOU'VE FINALLY ACHIEVED YOUR GOAL.. YOU NEED TO HEAL!". "Stop it Jiyu.." is what Akuto says. "I can see my death, its in sight.. Please listen to my final words". Jiyu starts crying even harder than before. "Akuto.. why?" he says.

"You.. You have been my first and only friend and person who I could trust. So I want to die with you near me. Please, come closer. I'll tell you something". Jiyu does as Akuto wishes from him. Akuto whisperes something unknown in Jiyu's ear.

Jiyu looks shocked out of nowhere. "A-alright" he says. "If that's your last wish, then I-I'll do as you say. When I come back... You better be still alive, Akuto.."

Akuto looks at Jiyu and thinks "We both know that you won't come back..". Jiyu starts moving. "Thank you, Jiyu.. I'll wish that I survive. After all, my wishes always come true..". Jiyu looks one last time towards Akuto and says "All your wishes come true, huh? That reminds me of the story.. The story that you created.. You played your role aswell, Akuma.. 12987 years before christ".

12987 years before christ, a race of devils was leading the entire universe. They kept hiding in the shadow of the "future" humans. They were true devils. Each devil was capable of destroying an entire planet. The abilities of the devils was also their name. Akuma had control over all the devil abilities. He was the leader of the race and his true power was all the devils combind with each other.


One day a special disease occured. The disease was so strong that ordinary devils couldn't survive. The poisen that came from the illness affected the devils and made them use their abilities against each other until they wiped their own race completely out. Akuma was the only one capable of surviving, but the poisen would kill him at one point. He split his body into 26 pieces and sealed them inside humans. That way he had a chance of resurrecting at full power. The people whom he resurrected in are unknown.

Akuto is playing a video game on his console. It's past 9 in the evening already. Akuto's parents would never let him play his game till past 9.

"Akuto..". Josei called Akuto from downstairs, but Akuto ignored his mother. "Akuto?!". Akuto sighs and says "Cant she just leave me alone and let me play my game...". "AKUTO!!". His mother started screaming and Akuto scared up.

"Jeez, she is scary when she screams" is what he says with a disgusting face expression. "Yes mother, what's up? Im playing my game...". Akuto leaves his room and waits for an answer on the top of the stairs.

"Me and your father are going on a date tonight. Please come and stay downstairs incase someone knocks on the door." she says. Akuto looks pissed and says "Mom!! Im playing my game! I can't pause it.."

Ketsuki replies on Akuto in a strict way "Akuto! Listen to your mother and no talking back. You are still 12 years old and you are playing way too much on that console. Take a break for once." is what he says.

Akuto turns around and says "Jeez, Father is even scarier than mother.". "Alright.. Alright, I am coming already, but when you come back home I am going to finish my game without anyone annoying me!" he says. Josei replies with "We'll consider that".

Akuto looks pissed and thinks "Damn it, can't you both just die and leave me alone.. I wan't to enjoy my life in peace". Josei and Ketsuki leave the house and are heading to the car.

Josei looks at Ketsuki and says "Ketsuki, are you feeling alright?". Ketsuki doesn't make eye contact but replies with "Why are you asking that all of the sudden? Are you afraid or something?". "No.. No.. I'm just asking.. You seem way too stressed lately.." she says.

They both enter the car and Ketsuki starts the engine. He is thinking deep inside of him. "I was considering taking you and Akuto a day outside the Western District." is what Ketsuki says out of nothing. Josei looks shocked and replies with

"You never take us outside the Western District. You always claim that it is your home and you can't leave it due to your work.". Ketsuki looks pissed. "I finally chose to spend a day with my family and you're still complaining?". Josei looks ashamed of herself. Her ungrateful behaviour made her husband pissed and she understood that.

They drive through Shi no Ji. "Do you know what day it is tomorrow?".. Josei is questioning herself and she replies by saying "26th of June right? Something special about that?". Ketsuki looks depressed. "Did you actually forget the most important day of the year?". Josei tries thinking harder than before but nothing comes up. "Just tell me.. I might remember it."

Ketsuki sighs and says "Shi no Ji's independance day ofcourse.." Josei looks shocked.. "I completely forgot about that.." she says. "You weren't even aware of th-". Ketsuki couldn't finish his sentence. He spotted a black car following them. Josei was also aware of it a few moments later. "Ketsuki, is that black car following us?" Ketsuki replies to Josei with a irritated face "So I wasn't the only one who thought we were being followed."

The car starts speeding up and Josei is scared. "The car! It's speeding up.". A police car appears behind the black car at high speed. Ketsuki is aware of the situation. "So the car is escaping from the cops. No wonder it's speeding up." he says.

The police car bumps the black car. Due to that, the black car crashed into Ketsuki's car. Ketsuki and Josei are badly injured. A police cop leaves the car and says "Damn it, we messed up really badly!" 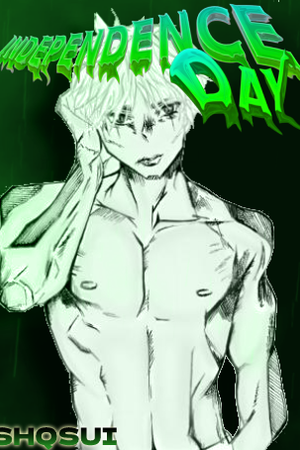