Aria and the Seven Artifacts

"What do you mean, you lost them?!"Bookmark here

Two figures stood within one of many caverns in the area, concealed from the light of the flames from outside. The angry one of the two stood a good foot below the other, hands on his sides and looking up with a look of intense fury. The other laughed sheepishly and rubbed the back of his head.Bookmark here

"I don't know what else you want me to say. One minute, they're there. Next, they're gone. They're crafty little things, you know."Bookmark here

That didn't placate the other at all. "Lucien, those things could not have walked off on their own! Did someone else come in?!"Bookmark here

"Hmm..." The calmer of the two, Lucien, looked up in thought. "I don't think so. But I don't see the problem. They're useless without a demon contract, right?" After a pause, he added, "Or am I wrong, Dian?"Bookmark here

Dian inhaled sharply and visibly tried to reign in his rising anger. It was becoming clear that yelling wasn't going to affect Lucien in the least. "Only one requires the contract. The rest can be used by anyone with a functioning brain."Bookmark here

"Whoops. I goofed up then!" Lucien laughed, not in the least bit worried. "I guess I better go get them back."Bookmark here

A hand extended to keep him in place. "That won't be necessary. I'll send a lesser demon to clean it up. You just... Stay here!" Before another word could be added, the smaller demon stormed off, muttering curses under his breath.Bookmark here

As far as Dian knew, Lucien was considered one of the more powerful and influential of all of the Satan spawns. Falling short of only a select few and the Prince of Darkness himself, he could easily destroy entire nations if he felt like it. Though for all the powers that he boasted, it was a shame that he also had to be one of the most air headed morons ever conceived. He would lose his horns if they weren't stuck to his head!Bookmark here

Dian shuddered at the daunting task of collecting those cursed objects. If they were average things, he wouldn't mind so much. But those items had wills of their own. They would seek out anyone they deemed fitting and turn their lives into their own visions of hell.Bookmark here

He had more important things to do than to play fetch with evil artifacts.Bookmark here

He mentally went through the list of lesser demons. Most of them, while perfectly capable, were off doing other assignments. If he was truly desperate, he could report to the Lord of Darkness himself - that was, if he could guarantee he would walk away unscathed. As he stewed in his worsening mood, he suddenly hit a solid object and hit the ground. Before he could let out a word, a high gasp made him freeze.Bookmark here

"Ah! Sorry about that!" A short girl with lavender hair jumped back. Her dark red eyes widened in fear as they trailed up to the ram-like horns on his head. Tiny black horns stuck out from her own head, marking her as the lowest on the demon totem pole. By the time Dian regained himself, the girl was preparing to make a speedy getaway.Bookmark here

A hand on her wrist stopped her in her tracks. "Not so fast."Bookmark here

Almost on cue, her face contorted into defiance. "Oh, come on! I didn't chip your fragile little horn, did I?"Bookmark here

And like that, her attitude had done a 180. He had to admire the gall she had to mouth off to a higher demon. But admiration was placed to the side as he addressed her. "I have an assignment for you on Earth. It's simple enough for a demon of your caliber."Bookmark here

She scoffed in response. "Making fun of me now?"Bookmark here

"Complete this mission, and you may just be promoted to the next tier."Bookmark here

That got her attention. "Really? Fine, what do I need to do?"Bookmark here

"You just need to fetch some cursed objects that idiot Lucien lost. Nothing complicated, I assure you."Bookmark here

"Ugh, a clean up mission?" Her spark of excitement had quickly been extinguished. "That moron's lost enough stuff to fill a landfill, seriously!" She clicked her tongue when Dian shot her a warning glance. "What? It's true!"Bookmark here

"True as it is, you're in no position to speak of your superiors like that."Bookmark here

He ignored her and continued, "I'm sure you're aware of the Seven Cursed Artifacts, correct?"Bookmark here

She paled. "You... You can't be serious. He lost those?! Does Father know?"Bookmark here

"We're not reporting this to the Dark Lord. But it seems you understand the urgency of this mission. You may leave now." He released his grip on her and walked off, smirking when he heard her grumble about "needing to be nicer to your lesser demons, ya jerk".Bookmark here

Was that nameless girl the best choice for this mission? Not by a long shot.Bookmark here

But she had to do. He just hoped that he didn't make the wrong decision in his haste.Bookmark here 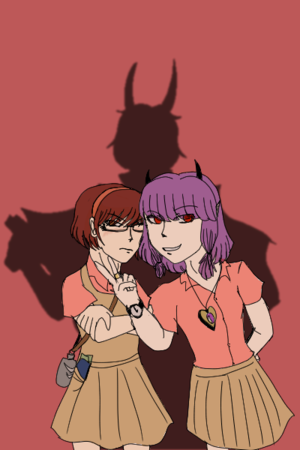 Aria and the Seven Artifacts