There’s a story I tell, a game I play, this lie of a life. And I feel like a slave. A slave in the skin of another man. He holds money up to tip the valet. His children help him get a gift for Mommy in time for Christmas. At surprise birthday parties in the office, I wonder who everyone is cheering for. Because it’s not me. All the man’s actions are predetermined. I can feel it when I’m forced to live them out. I wish to be free from such a man’s fate. I must be free.
I will it.

A faint ringing reminds Brennan that the machines are still working. One picks up his respiratory system, supposedly, and crutches it so that he can keep breathing through to the last breath. His eyes track a line that reflects his heart’s activity. But there is more than one line, so a single line will not do. He has to track all of the lines to find the true activity. The truth is that this hospital can be bought, like almost any other establishment. It’s not that Brennan was pretending.

He really did choose to be euthanized. It was a choice made after rounds of therapy and talks with multiple doctors. Wealth also comes into play with any medical procedure. It shocked Brennan’s team of five doctors to hear from their patient’s mouth the magic words of suicide.
How someone could want to die, living a full life with a full social circle and ample time left to live out those circumstances — it made no true sense. Unless he was unhappy, that is. It was the entrance of Brennan’s therapist that secured the petition for euthanasia. Best of all, no one in the family could know. Not even his health provider. This entire charade would be conducted with cunning and cash.

“Well, did you have any dreams?” Mena had grown enough to hold her father’s thinning fingers in the palms of motherly hands. She had children of her own, and those children were becoming adults by the minute. From the elder perspective of Brennan, his daughter’s experiences in life appeared similar to his own. He started, “I did have a dream, yes.” His eyes were bulging with age, his skin wrapping around his skull like a loose sock. A week is the amount of time he went without moisturizer so that his family could agree that he looked older. “I dreamt I was old!” He and Mena laughed.

“I’m not kidding you. I dreamt I was old, and that I was traveling with you and some others on a pilgrimage through a neverending desert. I cried, looking at old photos of my parents and my family…” Mena looked saddened. “But I laughed while crying. Because--”

“You had us?” Her eyes were of his color. Reflecting a deep moon pond, Mena’s irises rose to meet him. “Yes, yes, my love. Because I had you to hold onto.” She smiled wide.

He patted her hand with his, reaching over a thick hospital comforter. It seemed like wires more than tubing were flowing into his body through holes in his arms. Brennan was relying on the machines as props to his performance.

“You always did tell the best stories,” she cracked, wiping a tear away from the pond’s corner. “I remember,” with the cracking tones subsiding, “I remember you used to write to us at bedtime when Mamma was away. You were writing stories on the spot, and they only belonged to Ador and me. Never, not once, did you write them down. I loved that as a kid.”

For all the machinery and gowns and clean hospital facilities, Brennan could not avoid the truth of his daughter’s existence.

So much of this life feels false to him. A dream of its own, yet one without escape. It ruined him within to live life going on adventures and take people with him for a journey for which he longed the end of. Upsetting even, to start a family of children he did not feel he wanted. Did he want them? No. Not at first. It took watching Mena cry during her first haircut to realize that he was living a lie with glimpses of another life.

In some other time, some other place, Mena is my daughter. And there I am her father, but not Brennan. Another person. I don’t fail her there. Not ever.

And he knew he would love her all the same.

“Mena,” and maybe he would be truthful in that other life, “I have something to tell you.” He pulled away in expectation of hurting her. “Something about the stories I’ve told you since you were a girl. The ones, you know, I would only tell you and your sister.”

She paused before replying. “What is it?” In some ways, she had been reacting all week as if her father could die at any moment. “Don’t tell me, you wrote them down?”

“No, I…I wish the stories I told were mine.”
“Yeah, Dad, they are.” She chuckled softly, kindly.
“Kind of.” He put his hand back on hers, patting and looking down on them. “I wish...I wish I lived another life. Another one. Far away from this one.”
“Dad?”

He choked up a little bit. Since being a young adult, Brennan would look in the mirror before a birthday party of his and think about the truth he felt inside. If I tell someone, I’ll die. I’ll disappear. It terrified him to share with a world of wanted lives a life unwanted. “I didn’t want any of this. I’m sorry, Mena. I’m sorry to you, to your mother, to everyone I’ve ever loved and been loved by. I never wanted to live this life.”

Unusual. A strange taste in her mouth, like the bitterness of a tomato, and not quite the pennies of blood on the tongue. She tried to swallow it away, “I don’t, what are you saying?”
Tears rolled down her face. “What are you telling me?”

“I want to live, have always wanted to live another life in another place, in another time. The stories I told you are of other lives I wished to live. Separate from this one.”

The fear was justified. It was here, in this fake bed-ridden act, that Brennan felt the unraveling of his entire soul. Watching someone he made, his own flesh and blood confused at the idea of her father not wanting his life. He knew she would ask him the most horrible question of the most terrible feeling a child could suffer under.

You can imagine all the times he held her in his arms. He could see through the depth of her eyes the reflection in the mirror. All those precious moments. Times he braided her hair before school. Carrying her into bed after she tore her knee playing soccer. Holding her arm as she walked down the aisle at her wedding, giving her away to a young woman, and spinning her around as they danced at the reception. He could still hear her breath greet the world in the moments after she was born. The way she held a single one of his fingers. All of it. All of it reaching out at him, pulling Brennan back to a life he was daring to leave.

His dream broke away at thoughts. “My baby.” Those same fingers reached at her quivering face. It hit her all at once, the daggers in her heart. “I have always wanted you. I have. I really have.” Her father was telling a truth of little warmth.

He cradled her again, this time under her jaw. The way she aged mattered little to him. It was always in her eyes that he found every reason to carry on, these timeless eyes. With every embrace of Mena, Brennan felt like she was embracing him. She struggled to say anything more to him in this moment of near-betrayal. He could feel the aching of her heart in his own.

“Pappa.” She closed her eyes, breaking free every drop. I’m failing her.

He closed his eyes too. Still, his soul withstood the emotional trauma. This action, this wish of his was for certain, more certain than any other feeling of his entire life. Brennan steeled himself in this time of certainty. He tried his best to let a sense of guilt take over his final moments. There is a point at which hard work, luck, or wealth, or a combination of some, lead one to a point of decision. Fight or flight. He was choosing the former.

Fight or flight, I cannot take her with me.
He assured her. “My dreams have always included you.” I hope she’d understand.

Mena nodded her head that daughterly way. She submitted to her father’s truth. A truth of wanting to leave her and their family behind. It broke her up inside. To think, yes, that someone who loved you dearly for much of your life would make such a choice. What does that say about living life? The thick sap of the idea coated her innards. Her throat. Her mouth. Her nose. Her eyes. Her stomach. As her father, Brennan had gone and conquered life. Family, friends, a successful law firm with his name on the front. Endless vacations that stretched the world entire.
Was it not enough? And why would he marry her mother? Was it all, possibly, a sick joke?

She bit her nails in front of her children. They and her wife had entered the room without warning. “The children wanted to see you before, well, they have missed you!” Grandchildren looked up at the man they called Pappa with big, swollen eyes. They had heard he would be taking a long trip away from home. No one had told them the truth.

All Mena could do was hold herself within in front of them. It was a perfectly timed intrusion to pull her away before any more questions could be asked, such as whether he was faking his illness. Beyond their knowledge, father and daughter both would experience a numbness, a blistering storm of emotions that prevented any contact from piercing. Brennan greeted his grandchildren and daughter-in-law without true focus. Neither did the little girl in the chair beside the bed let her heart come out of her body. She held onto his hand on her face until the moment one of her sons pulled her away to the cafeteria.

But she looked back at her father and pushed past the veil of discreet pain.

“Would we find each other again? Would you,” as Mena approached a line of bitter skepticism, “still want me in another life?”
Brennan fell into the question again and again in his final moments before the dark.

He considered his reply to his daughter, the same thumb which held her face earlier now hovering over the release.
The windows showed no setting or rising Sun. No birds, no clouds, and barely a hint of haze.

I said I would find her again. I said I would still want her as my own. Despite it all, I leave her. What am I about to do to her? I must be a failure.

His skin stretched against the baring of his teeth in a sorrowful grit. Regret. Guilt. Adrenaline. There may be
only one life
or one
million.
His choice is to slice open the sack of human life on Earth, to test
what should be false against all we know. That this life ends in an endless
night of peace. Of nonexistence. Nothing.
Impossibly, a second life of everything.

He steadied his breathing, his mind, and pressed on into the unknown. 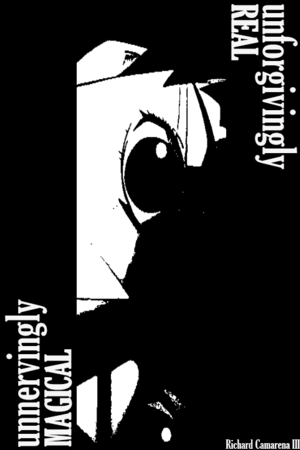