Laverna took a deep breath as she gazed around her dorm room. Despite having arrived that morning, it had taken her until the evening to get her dorm in any sort of acceptable shape. Her notebooks were neatly stacked to the left of her desk, and her pencils and multicolored pens were stored in their appropriate containers right behind them. She didn’t have many decorations, save for a picture of her family stuck to the wall with putty. A big red X had been drawn over the face of her father. He had left them just before her fourth birthday. Laverna’s mother had died several years later, leaving her to take care of her younger brother, Joseph.

In the center of the desk sat a box that contained the day’s “acquisitions”. She would have to put those in the lost and found later. Given her socioeconomic situation, she was lucky to get into college at all. Fortunately for her, Thettle University happened to be very…forgiving for someone in her situation. She wasn’t going to let her kleptomania get in the way of this chance.

A light click was heard as the deadbolt on the door snapped unlocked. A normal person may have panicked, but Laverna knew there was no point.

“Come in, Mictian!” she called before the door had a chance to open. The door swung to reveal a boy of average height with dirty blonde hair and freckles. While he may be considered to be a conventionally attractive young man, his fashion sense could be described, in the nicest way possible, as dated.

“Expecting me, were you?” Mictian said, a mischievous grin on his face.

“I’ve learned that I can never not expect you,” Laverna shot, smiling back. The two had been friends since childhood, and they had helped each other many times over the years. Mictian’s family was much better off economically, and they had supported Laverna and her brother whenever they needed it. Although they had always stressed it was unnecessary for Laverna to repay them for the help, she was determined to pay it back however she could.

“I see you’ve got some new things,” Mictian said as he noticed the box on Laverna’s desk.

“Same as always,” she replied. “I’ll be taking them down to the lost and found. Want to come?”

“Anything for a friend.” After picking up the box, the pair left the room. Laverna made a point of locking the door behind her.

“Next time,” she said, pointing at the lock. “Knock before you undo all my locks.”

“Aww, but that’s no fun,” Mictian jested. Even though his response wasn’t sincere, they both knew each other well enough to know that he would do exactly as Laverna asked.

“Hello,” the lady at the frost desk began, smiling from ear to ear. “How can I help you today?”

“Hi, I’ve come to bring this to the lost and found,” Laverna replied, handing over the box.

“This much stuff already?” the woman asked, mildly bewildered. “Kids these days need to keep better track of their stuff.”

“Yeah,” Laverna said, chuckling nervously. “I’ll…be sure to do that.” As she spoke, she turned, marking the end of the conversation.

“Yes please. I think Frankson Dining Court is close by.”

“Sounds good to me.”

When Laverna and Mictian arrived at Frankson Dining Court, it was packed. The two stood just inside the entrance, overwhelmed by the sheer number of people.

“So um…after you,” Mictian said finally, gesturing for Laverna to lead the way.

“Wow, thanks,” she replied, giving him a sideways glance. Spotting another pair who seemed to be getting ready to leave, she started to approach. “Excuse me, are you still using these seats?” Laverna asked as she reached the two girls.

“Nope, go right ahead,” one of the girls replied. Laverna and Mictian quickly reserved the seats before going to get food. The dinner of the day was a standard hamburger and a small, dressing-less salad.

“I must say, this must be the best food I’ve ever had,” Mictian joked as they ate. Not sure if the joke gratified a response, Laverna decided to only give him a little glare before looking around. There wasn’t much difference in the number of people around, but several groups were close to finishing up their meal. The large dining room echoed with the sounds of laughter and talking as friends destressed before the start of classes the next day.

Laverna and Mictian shared many of the same classes, as the freshmen curriculum was largely generalized before they split into the individual majors. In addition to the university-wide generalized freshmen curriculum, Thettle University was also known for their forgiveness and open-mindedness concerning those with criminal records, no matter the severity of the offense. Because of this, the university has largely been called “The School of Redemption.” Laverna and Mictian were essentially a criminal couple early in their lives. Laverna often needed to steal from others to be able to support her and her brother, and Mictian was oddly good at getting through locks. He also loved exploring and he had yet to find anything that could contain his curiosity. Their past made it such that Thettle University was their only option for higher education, as was the case of many criminal youths.

“Shall we head back?” Mictian asked. “There’s a couple places I wanted to check out in the dorm.”

“I’ll probably turn in for the night, but feel free to explore all you want,” Laverna replied. “Just remember…”

“It’s not illegal unless you get caught.” The two chuckled as they spoke in unison before returning to the dorm.

Laverna laid in bed waiting for sleep to take her. She was a little nervous, but also excited. College was a new chapter in her life that she honestly didn’t even think she would ever have the privilege of experiencing. She just needed to make sure she didn’t mess up this chance. With those thoughts in mind, she was able to drift into a light sleep. 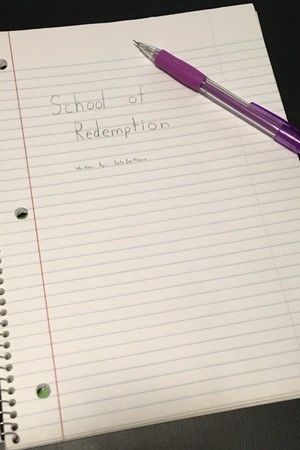