Stepping outside in Tokayashi was like walking into another oversized room, with its bright blue walls and unchanging furniture of neatly trimmed lawns and little houses that looked like they’d come flat packed that morning. Evil emperor cat stared at her from the window opposite. She stuck her tongue out at it. It gazed back in silent rage, doubtless contemplating her manner of execution.

Kaori was greeted by the hymn of distant lawnmowers. She looked down the street and saw its residents moving up and down their gardens in staggered unison, like the endless reflections of a hallway with mirrors on either side. Roll up, roll up! Place your bets on the racing turtles! Which of these magnificent beasts will take today’s prize? An all expenses paid trip tooo… Tokayashi High School! Complete with authentic homework and feelings of social alienation!

She pulled her backpack up onto her shoulders, stuck her pink sunhat on her head and walked out into the street. It was the kind of town where you could walk down the middle of the road without fear of encountering a car let alone being hit by one. They were about as common here as whales in the desert. Sometimes you’d see one in the distance, shimmering like a mirage, but it would have escaped long before you could get within harpoon range.

A group of people sat at a bus stop in the desert in the shade of a giant whale. One man in a pith helmet and safari suit shook his newspaper to separate the pages before turning them. An old lady, whose entire body was covered by a purple woollen coat, stood staring impatiently into the distance. Behind them, the whale’s mouth opened and emitted a tiny chihuahua like bark. A bubble emerged and ascended into the sky.

Well, that was interesting. She thanked her brain for the insight. It was no wonder she was doing so well in school…

Hamada-san knelt on a cushion by the fence in the garden next door as always, the brim of his broad sun hat flopping over his eyes. He had a trowel in one hand, and a green watering can stood beside him sweating. She saw a little row of holes ready for seeding in front of him.

He looked up and grasped the watering can. ‘Good morning, Kaori.’

Don’t feed themselves. She whispered.

‘They sure don’t, Hamada-san.’ She beamed at him and bowed before heading off down the street.

Naomi’s red bike appeared on cue, creaking up the slope of the road. It swayed violently as Naomi pedalled, the expression of exhaustion on her face breaking into a grimace of a smile as she passed. She waved and rung the bell and Kaori woke briefly at a reception desk in her head, where through a large window she could see Naomi waving from her bike. A telephone sat silently on the wood in front of her. It was holding its breath, withholding all the calls that were coming in at that moment. A pile up of conversations pushed up against each other inside it, horns beeping, angry hands punching them, and in front, Naomi on her bike, ringing that perfectly clean metal bell, like a Tibetan monk striking his gong. The gong brought her back to the street and Kaori waved and turned to watch Naomi and her bike turn black as a grilled lizard against the shimmering golden pan of the sun behind her.

For everyone else this town was perfect. There were a thousand little holes into which they planted very nicely. It was a place where all the extremes of the world met and cancelled each other out into one lukewarm contentment-flavoured soup. If you put together a picture of every typical image of a Japanese small town, scraped from people’s subconscious, from the manga, books and tv that found their way into them, you would end up with something like Tokayashi. It was like a coordinate, where young newlyweds with babies, city professionals who had tired of the rat race, and the older people who were there first, all met at the borders of their separate nations. For her it was more like being trapped in the mechanism of some great cuckooless clock.

Speaking of young newlyweds, or cuckoos, the new couple - uh, was it Kasahara or Hasakara - stood outside the fence of the corner house waving at no one in particular, a large white moving-in lorry parked beside them. Her mom had made her bring them bowls of rice when they’d arrived. She’d stood on the doorstep like she was their family’s own private mascot, looking away, the gifts held out at arm’s reach. The bowls had come back a few days later filled with newly fried rice, since which her mom had called them ‘that lovely couple’ whenever they came up. Oh, now they were waving at her too. They didn’t even start a new wave, just continued with the old one, barely missing a beat. She waved back, smiling and muttering obscenities under her breath. It was like they were on a lollipop stick, just rotating and waving all day. She looked at their outfits and imagined a single mechanism operating their arms and smiles beneath it. Her eyes went down to the grass. It must be operated by someone living under the garden, pedalling on a bicycle attached to pulleys and levers all day to keep them in operation. There would be portholes looking out into submarine life of other dimensions. Such a venture could only be run by a man who was bald and owned a white lab coat. She wondered what he was doing down there… but then supposed that anyone living under a garden must have a perfectly good reason for doing so.

Kaori stopped for a moment, then crossed over to the Kasahara-Hasakaras. A note of confusion entered their eyes as they watched her, though the smiles remained intact.

She leant in close and from behind her hand, whispered: ‘I know’, then continued down the street.

She felt a lot better now. 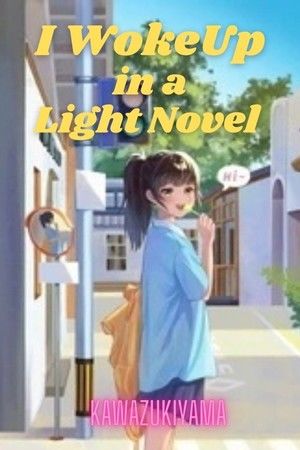