It’s All Just So Weird and Confusing

"Current Events". It was basically a freebie class before the “Change." Or the "Apocalypse". Others called it "Judgment Day". Some "the Transformation". There just wasn't a real unified theory yet. Personally, I think “the Change" feels the least strange to say.

In any case, Current Events: it was a class where I could usually fill out whatever BS worksheet was assigned in ten minutes and stare out the window listening to music the rest of the time. Not to mention the teacher, Ms. Staton was chill.

But more than just her appearance had changed; for starters, she was a lot more anxious. I'm not sure, but I have a feeling it had to do with the fact that she became a centaur. Centaurs have six limbs, just like insects. I'm not saying they are insects, only that they are just as disgusting. I digress.

When school began anew, Ms. Staton announced our revised schedule for the remainder of the semester, and it was much more involved than the old one; I suppose that made sense with how messed up the world had become. "On Friday we're starting a group project. I'll announce groups on Thursday at the end of class," she said.

And when Thursday rolled around, Ms. Staton divulged the project. "You should choose a business, government, or organization from the list on the handout and explain their response to the Transformation," she said. She explained that it was meant to be a presentation, and that we had five days to complete it; and that, importantly, it would be about fifteen percent of our final grade because of the shortened semester.

Then she began to call the names. "Tim and Allen." I snorted at the pun, yet awaited my own name with hesitant curiosity.

Ms. Staton read off more duos and trios. And then she said "Noel, Jessica, and Montana."

My neck twitched in intrigue. Jessica: a giant, white snake, as wide as a person; and Montana: a man-sized, fuzzy, black bat.

Jessica was a popular girl—not a queen bee, but simply respected. I didn’t associate with her. Not because she was mean, but because I felt like we had literally nothing in common. She was a senior, and she was sociable, straightforward, and nice. I was a sophomore, and I was asocial, sarcastic, and sometimes a dick. Oil and water.

Friday saw us in the computer lab, doing our initial batch of research for our project. I saw my partners as I walked in and anxiously took my seat between the two. Jessica looked to the teacher, while Montana looked to the ground.

I eyed both of them nervously. I hoped that the project didn't suck.

When Ms. Staton told us to start working, Jessica turned to me and Montana. I flinched at the glare of the snake. Montana only glanced our way nervously.

"Sso," Jessica stuck out her tongue, unintentionally hissing in her raspy, airy voice, before turning back away from us. It was hard to tell, but it seemed like she was embarrassed. I found it utterly hilarious.

I nodded, my lips together and flat in confusion.

"So, did you guys think about any of the options?" she asked studiously.

I furrowed my brow. "Not really," I said quietly.

"Ah, well I thought maybe Sitibank or the Catholic Church would be neat," she replied. "What about you?" she asked Montana.

He shook his head. I realized I hadn't heard him talk since the beginning of the semester, before the change.

"Uh, I mean, I thought the Catholic Church sounded interesting from class yesterday, but the National Allegiance sounded…" I trailed off, realizing how I was coming off.

Montana looked at me with fascination, but remained silent.

Jessica was just confused. "The Nazi party?" she asked without accusation. "Yeah, I guess they were all about 'racial purity', right? I wonder what happened to that."

I was beyond relieved that she understood.

Montana pursed his lips and stared up at us from his hunched position.

"Uh, yeah. Yeah, I was wondering that too," I said sheepishly.

"Were you not?" Jessica asked.

"N-no, I was, I just thought it might have come across—I mean come off as weird that I said I was interested in the Nazis."

Jessica huffed in amusement. "Yeah, I guess. So we got the Nazis, Sitibank, or the Catholic Church."

I didn't have the energy to question why she wanted to do a report on some random big bank. It was a lot more harmless than Nazis, at least.

"What about you, Montana?" Jessica asked in as sweetly a manner as a snake could. "You got any more ideas?"

He shook his head, still mute.

A strange thought struck me. Could he even talk? Don't bats make sounds too high pitched to hear? I asked myself.

"Well, let's vote on it, I guess," Jessica said. "Sitibank?" she asked. Only she raised her tail.

I grimaced, trying to hide my mirth.

"Okay, not Sitibank. The Catholic Church."

Jessica raised her tail and I my hand. We looked expectantly at Montana. He glanced to the right, his arm-wings at his sides.

"Uh…" Jessica said, "I guess not that one either. The Nazis?"

We all raised our various appendages.

"Nazis it is then," Jessica finalized plainly.

Jessica took the lead rather naturally. I nodded along as she explained how we could divide up work. I would present and research the history, Jessica the present, and Montana the future. But the thought from earlier came up.

"Can you talk?" I asked Montana. But I quickly realized how insensitive my question was. "I-I mean, uh…" I stammered, not knowing how to amend my query.

"I think what she—he's trying to ask if you're comfortable presenting," Jessica said, unamused.

But I noticed her slip up, too, and a pit formed in my stomach. I tried my best to ignore it.

Montana was deep in thought. I knew the exact feeling: it was like a single, small decision would put you on a radically different path.

But after the pregnant pause, he simply shrugged.

Jessica huffed. "Well, tell us when you know. There's no pressure either way. You're okay with doing the research for the future section, right?"

Things went smoothly after that. We were able to get a sizable amount of work done in the remaining time. I was less than mediocre at presentation projects, but Montana and I had the guru herself to guide us. She had us make a simple research document outside of the presentation, and that seemed sensible to me.

The whole time, I was amazed how fast Jessica was with only the tip of her tail. It wrapped around the mouse like an octopus tentacle and stroked the keys with the precision of an assembly line robot. It was as if she had practiced her whole life—which was a weird thought, because she'd only been a snake for less than a month. At least, as far as I was aware.

Montana, on the other hand, was struggling. It was like he had never learned to type—which was actually not that weird of a thought.

Right before class was about to end, Jessica had a suggestion for us. "Hey, do you guys want to exchange info so we can work on this over the weekend?"

"You guys got Snap?" she asked.

Montana nodded, but I didn't.

"I don't use social media," I said smugly.

Jessica was unfazed. "What's your number, then?"

I told her my number, and Montana brought up his QR code.

The bell rang, and Jessica started to slither out. "I'll texxx—" she hissed, "Text you when I get home," she corrected. 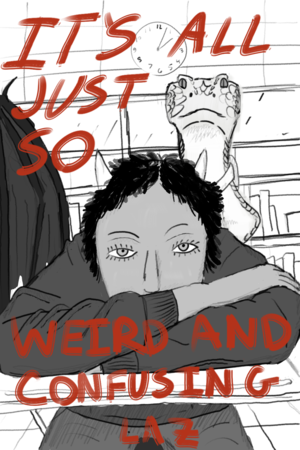 It’s All Just So Weird and Confusing