The Old Man And The Machine (2)

We find ourselves once again witnessing the madness of the bitter old man. But hm? Last time we saw him, he was wearing regular street clothing and was messing with the machine. But now, he’s running—as fast as an old man can run, anyway—down the street in a… doctor’s uniform? How strange, a lot of time must have passed since our last check in on the old bugger.

I wonder, though, just where is he running? No one is chasing him. Perhaps running to his patient? Or… well, this city block does look familiar. Maybe he’s taking another trip down to the machine. And, I suppose if it wasn’t clear, this special machine, it does something neat—a party trick to some. A potentially dangerous party trick. It allows the person connected to it to just jump right back into a previous state in life. Just like that. Like magic. Or rather, like super advanced quantum technology. So yeah, magic.

But why is it dangerous? Well, imagine you’re… Oh—imagine if you’re like this bitter old man who clearly hates his life. So why do you think he’s so desperate to escape back to the past? Some people can get so caught up in this and can spend an entire lifetime in the past. Imagine how little work would get done if no one was even in the present.

Oh! Well, would you look at that? Just down the street is the ever so wonderful building that holds the grand machine. My guess was right on the mark! As the old man runs as fast as he can down the street, he eyes the building, desperately making his way towards—

Wait—did he just get pulled into an alley? But by whom? Oh, it looks like a younger man in a hoodie. It’s definitely some delinquent robbing the poor bastard of all he has left. The delinquent frantically shakes the old man as tears run down his eyes in fear. Then shouting something into the old man’s ear, the old man, in response, shakes his head in denial. I wonder, whatever could they be talking about?

Suddenly, the old man breaks free of the delinquent’s hold and pushes him off before barreling back into the streets, continuing his journey toward the building. The delinquent runs a few paces into the street and looks off at the old man running through the crowd of passerbyers. It’s almost like he wants to say something but can’t find the words to do so. So he just stands there as people push past him.

More importantly, however, the old man makes his way toward the building and pushes the doors wide open—metaphorically, anyway. They’re automatic doors. It’s 2071, of course. He makes his way to the receptionist’s desk to ask for another ticket. The older woman on the other side of the counter; she looks at him. Debating whether or not to give him a ticket to the machine or not. Knowing the dangers of it, she may see the crazy in his eyes and the desperation in his face. She knows it’s clearly not safe to let this man use the machine.

She grips the ticket tight in her hand as the old man slams his hand on the counter, demanding for the ticket. Security seems to have noticed the situation as they eye in on the old man. As the old man continues to yell at the poor old lady across from him, a hand grabs his shoulder. Of course, security isn’t going to let this slide. Oh? It’s not security?

The old man turns around to find the delinquent from earlier—and it looks like he’s brought a friend. Just what do these two want with this old man, anyway? I suppose, this old man must be a doctor, so he’s got to be full of cash, right? The delinquent’s friend moves past the old man and talks to the receptionist at the desk while the delinquent from earlier takes the old man by the arm and walks him past the receptionist and through the building.

“You want to use the machine, right, old man,” the delinquent asks.

In a frantic nod, the old man looks the delinquent in the eyes.

“Of course,” the delinquent chirps, “I come here often myself, and there’s actually a very specific machine I like to use. I’ll bring it to you now.”

As they walk down the hall, the old man finds a door with a sign with… his name on it? Seeing the old man distracted, the delinquent takes a tighter grip on his arm and pulls him forward.

“But… that door,” the old man murmurs.

Pushing past the door that was obviously for the old man, they make their way to the elevator. Once inside, the delinquent pushes the button for the seventh floor. They stand in silence, waiting for the arrival of their destination when the old man breaks said silence.

“Do you really care? Or is there another question you’d rather ask? I’ll only answer just one question!”

The old man looks down and thinks about a question he’d rather ask when they arrive at the desired floor. Being pulled along, they make their way a couple doors down, to a door with the letter B on it. They stand in front of the door before the delinquent pushes it open. A dark room with a single light on the other side. The machine is in there. Just a few feet away. Yet, the old man won’t move a muscle. Why, I wonder. He was so desperate just a moment ago.

“Well,” the delinquent says, “What are you waiting for?”

“Ah, forget about that. Let’s just get you hooked up to the machine.”

The old man stands in silence.

“Hey,” the old man pipes up, “Why do you want me to use this machine so badly?”

Oh, a sophisticated question! Well, not overly sophisticated—but certainly so for this old man. Yes, why does this delinquent want the old man to use the machine so badly? The old man is clearly not well, so, perhaps, is it reverse psychology? I wonder if that makes any sense, though. And this is all ignoring the fact that the old man and the delinquent are total strangers. Why do all this for someone you don’t know?

“You want an escape from your life, don’t you?”

The old man glances toward the delinquent, not saying a word.

“That machine over there,” the delinquent gestures with his head, “Isn’t that an escape?”

The old man follows the direction of the gesture and lands his eyes back on the machine. Of course. Of course it’s the escape—it’s the only escape for the poor bitter man’s life. The old man takes his first steps into the dark room as the delinquent follows close behind. He sits the old man down in the machine’s chair and hooks up all of the wires to him. The delinquent finally puts the helmet on the old man. Then, a voice from the machine speaks up.

The delinquent places a hand on the old man’s mouth.

“Let’s go…” the delinquent thinks, “Let’s go back to a place in your thoughts that opened your eyes to the truth.” 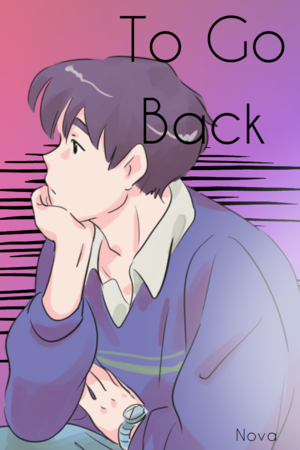