My Sister is Destined to Be a Warlock! Volume One: Family

· Warlock - Usually a wizard, they usually have a great deal of (taught) magic and training. They would have to form a pact with a demon, usually a lower level one, in order to “elevate” their magic. It is believed that a warlock’s soul is “tainted” by the demon’s magic and the pact they have with them. They are susceptible to the “demon’s madness” and it’s pretty uncommon - but it does happen.Bookmark here

· Wizard - Most magic wielders are wizards if they are able to afford the fees and boarding. They learn more towards proper technique and require rules to follow rather than use their magic “out of bounds”. They have to follow certain rules, and there are a lot of them, but for many of them, they study more than put their magic to practical use. Although, they use magic for more every day uses to prevent magical buildup. Usually, wizards become professors in schools, politicians, and more; but very rarely, protectors of the city/town/villages. Because of the huge number of trained wizards, there are often schools popping up in different areas - mostly to continue their own studies.Bookmark here

· Witches - Usually women but it is not terribly uncommon for men to be witches. There are a lot more witches in poorer cities/towns/villages due to the simple fact they cannot afford the wizard boarding schools. They are more focused on the earth and focus more on healing spells and tricks along with defensive spells. They have extensive knowledge about herbs and they are passed down from generation to the next via grimoires. If a witch manages to inherit elemental magic, they are taught very few offensive spells to prevent both magical build-ups and to prevent a night witch creation.Bookmark here

· Monsters - The general term for animals that became corrupted by a certain warlock’s demon madness. Through the years, they have improvised, adapted, and overcame the troubles as their new forms and created their own lineage and generations. They feast on other animals and humans. They are very susceptible to demons’ manipulation and are not afraid of them. They get irritated easily with lower-level demons but are completely obedient towards elite demons. It is unsure how monsters showed up and exactly when, but they are forever part of the world as demons continue to use their control over certain warlocks to feed their existence.Bookmark here

· Demons - Creatures from the underworld who are said to be thousands of years old. Young demons are said to be hundreds of years old. The more elite demons tend to be characterized by their horns, red eyes, large wings, and their unnaturally pale skin. The only real trait that lower-level demons share is their red eyes and wings that appear at will. Beauty, they can choose to have it or not. They can try to blend into society, and it’s easier for lower-level demons, fairly easily if they want to but they mostly revel in the terror and pain they cause.Bookmark here

· Magical Buildup - Magical buildup can occur when magic has not been used for longer than a week. Because different classes have different consequences, for magical buildup, they vary on the consequences but the initial effects remain pretty consistent with one another. When magical buildup occurs, it tends to affect the extremities and appears as a large wart or pimple. Before things get too bad, the affected goes to a local healing witch - who would make a cut to the wart to start leaking the additional magic. The witch will help leak as much as possible before it would be “safe” for the patient to use magic. Once enough has leaked, the witch will bandage it up and give them instructions to heal it. Eventually, while they are in recovery, the patient will learn additional spells to help better control it.Bookmark here 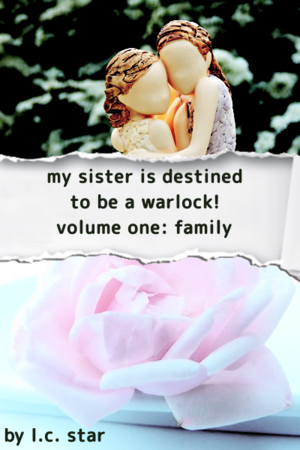 My Sister is Destined to Be a Warlock! Volume One: Family