A Needle in a Haystack

Red is the Color of You [Short]

During the night only the laughter of families can be heard in this suburban East-Asian town, most notably the family of photographers which only consists of two: Izumi and his mother Kanae. The boy’s father wasn’t present and never will be. Parenthood was something he wasn’t ready for and refused to believe could even be affiliated with him, but that was something Kanae and her son had long since accepted. Despite the heavy burden of taking on the roles of both mother and father, she knew in her heart that she would give Izumi the world and more. Even through their struggles, she made it her sole purpose to bring a smile to his face, and her effort would come to bear fruit as her son became a bright torch in a dark cave for all affiliated with him. While Izumi was still young, she worked as a freelance photographer in order to make her own hours and support him as much as possible. As such, photography became one of many things that Izumi would learn from his mother.

There was nothing to hate about Kanae’s son, who always had a sparkle in his eyes that signified his never ending curiosity. Throughout his life many would liken him to a puppy or a kitten as his baby face would stick with him into adulthood. In fact, Izumi was a spitting image of his mother, from their equally outgoing and open minded personalities to almost entirely their appearance as well. The only difference in their looks was their hair, which was a fluffy yet short coral pink for the boy and a long, straight brown for his mother; though both shared a soft mint tint for their eyes.

In the mornings his mother would continue work and would often travel for such, hence always taking Izumi with her. The beauty of the world would reflect in his eyes and always bring a wide smile to his face and in turn his mother’s. She was a firm believer in developing a child’s imagination, so she wanted to show him everything the world had to offer; even the fictional. Before she tucked him into bed she would always read him a story which was fantastical. Knights battling to save their kingdom from a dragon, ghosts exacting revenge on those who wronged them, anthropomorphic animals teaching morals through their conflicts, minotaurs and goblins terrorizing towns, myths and legends, anything and everything. Yet, there was a particular story that Izumi had his mother read to him time and time again. They would sit in the living room under a pile of blankets and pillows as she read passionately to him the story whenever requested.

“Tell me the one about the remanant again!” The five year old jumped up and down, a large smile stretched on his face. His mother had him at a young age, 22 to be exact, so she always was able to return his energy. She pinched her son’s nose and he rubbed it with a scowl on his face.

“It’s re-ve-nant! If you don’t remember his name right next time, he’ll eat you up!” Kanae grabbed her son and tickled him, causing him to erupt with laughter.

“Ok, ok!” He shook off his mother and sat attentively.

As such, she finally began, adopting a stern tone. “Legends tell the tale of a near inhuman entity which plagues the hearts of those who are at their lowest. He goes by many names, but they all originate from one of two words: Demon, and ghost. For your sake, my little cherry blossom, we’ll call him the revenant.” Kanae pinched her son’s nose again, reminding Izumi to practice saying the name correctly. “The revenant is said to take on many appearances in order to trick his prey into falling to his schemes, but there’s one part of his appearance that has been noted on many occasions. His long crimson robe. Some believe this robe to be magical, some believe it to be an extension of himself, but none truly know. He only approaches when a person is alone and distressed, offering them solace in an offer that’s nearly impossible to decline: a wish with the ability to change your life. Riches, love, power, anything and everything you can think of.” Kanae leans in slowly. “But…at a steep price….” In a flash, she snatches her son up once more, raiding him with tickles and bringing a beam to his face. “Your life!!!! He eats little naughty kids like you who don’t say his name right!!” Instead, she pinched and pulled her sons lightly blushed cheeks, ensuring he never forgets the legend of the revenant.

Some part of Izumi wished to meet the revenant as he wanted to ask him so many questions. For some reason, he found the story of the revenant to be the most interesting of them all. Something told him that there was more to the revenant than what his mother told him, but he wasn’t old enough to search for the answers himself, nor to speculate on his own.

On a warm autumn day, his mother woke her son up bright and early to take him to a large wheat field. There was a small two way road that was along the perimeter of one side of the field while the other was met with a cliff which led to the ocean. As such, the field received a beautiful cool breeze that swayed the wheat stalks gracefully. Most notably, there was a large oak tree in the center in which the encircling wheat was cut. Many of the locals believed it to bring good luck as it survived all sorts of natural disasters and has been erected for decades, likely even centuries. When they arrived, Kanae set her son free to roam the fields, telling him to yell for help if a stranger tried anything weird, but she knew she didn’t have to worry about that since all the residents of the town, although few, were incredibly kind and would never harm a fly. Her son was also smart enough to not deliberately get into trouble. As she went off to take pictures of the field, Izumi ran off with his fully functional mini camera, which his mother got him for his fifth birthday to promote his growing passion. He steadily approached the large oak tree which peaked his interest the most. Looking through the camera lens, he snapped pictures of the base of the tree excitedly, slowly veering his camera higher and higher before suddenly stopping. An unexpected sight, as Izumi has never seen an adult in a tree before. Izumi zoomed in with his camera to get a better look at the man since his appearance was unlike anything he’s ever seen. Most people in the suburban and rural areas don’t dress so flashily, but now that he thinks about it, he hasn’t seen many city folk dress like that either. The most prominent thing that Izumi could see was the man’s red hooded robe, which was lined with black fur and patterned strangely. He couldn’t make it out clearly from how the robe was draped, but it looked like black thorns. It seemed as though he was wearing a teal dress shirt, although mostly open, and black slacks with two darker cyan belts attached in a hoop on each hip, each had a similar black thorn pattern. The man’s hair was wavy and reached to the nape of his neck. Izumi wondered how someone could have multiple colors in their hair, wondering if the man used paint to make the ends of his black hair fade into a vibrant red. The boy shook his head to regain his focus, thinking to himself that the best way to record this strange sight would be to take a picture and show his mother.

The man immediately looked downwards, evading his eyes from the book in his hands.

“What are you looking at kid?”

Izumi couldn’t see his face well before because of the book, but now Izumi came to the realization that his eyes are mismatched, with the right being a royal blue and the left a dark amber. Both glowed vibrantly–almost inhumanely–all of which only added to his mesmerization with his appearance rather than the fear of a possibly dangerous stranger as his mother previously warned.

“How did you get up there mister? And why do you look so funny?” Izumi lowers his camera and gazes upwards at the mysterious man, cocking his head in curiosity. The man, clearly annoyed, wedges a bookmark into the novel and closes it.

“Funny huh?” He sighs heavily then mumbles to himself, “Man, I hate kids.” Adjusting his posture, he sits upright in the tree with an arm on his bent knee, the same of which holds his book, while the other leg hangs over the tree branch. “How can you see me kid?”

Shaking his head, the strange man criticizes himself, “I don’t even know why I bothered asking.” For a moment, he pauses and thinks on how to approach the situation.

Izumi’s eyes light up and he eagerly clenches his fists. “Really?! Can you show me how!”

“I’ll do you one better little boy.” With a snap of his fingers, Izumi and the man switch places, with Izumi now standing in the tree looking down at the man who is now on his feet below him. Scared, Izumi immediately tries to sit down and he holds onto the tree trunk the best he can, but he quickly forgets his fear in turn for curiosity.

He turns his back to the boy and waves, allowing Izumi to get a better look at the design of his robe, which he now realizes is a mix of black thorns which circle what looks like a pair of clawed wings with a thin vertical eye in the center. Izumi fumbles for his camera to take a picture of it before he can leave, but once the camera clicks, the man disappears into a cloud of black smoke which quickly fades. He lowers his camera, his mouth completely agape and his eyes sparkling. The only thing that is running through Izumi’s mind is a rapid fire series of questions that he’s begging for answers to, not realizing that he’s stuck in a tree with no way down. Rather than shouting for his mother for help, he calls her over in order to express his excitement to her in hopes that she can help him find that man again, yet his mother rushes over in fear.

“Izumi! How did you get up there!!” Kanae climbs the tree and reaches her hands upwards to pick up her son. “I thought you didn’t know how to climb trees, you nearly gave me a heart attack!”

“I don’t, but mom mom!!! There was this guy he was tall and he was dressed so funny he had this funny looking robe on and super weird colors and he knows how to use magic!!!! He put me in the tree and all he did was snap his fingers!!!! I can show you I can show you!” Izumi pulls out his camera to show his mother the pictures, but the pictures lack a figure. The first shows an empty branch while the second is only of the ground, making Izumi become frightened and frantic. “Whaaat! I know I took them-” He whips his head towards his mother, “Mom you have to believe me!!”

She ruffles his hair and picks him up once more. “I do, I do. You can tell me all about it on the car ride home, ok? But promise me you won’t teleport into trees again.” 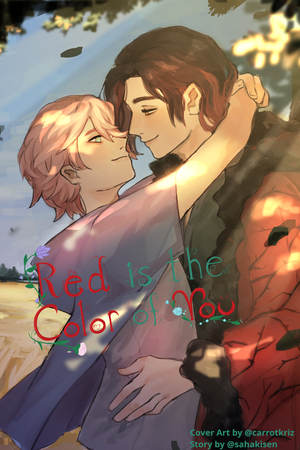 Red is the Color of You [Short]