When the Eccentrics meet.

I wasn’t particularly fond of the word "conspiracy". It was too misleading. Conspiracies existed but they weren’t as tedious and numerous as they were portrayed to be. Not to mention it was just silly to think about for the most part.
I don’t know why I am even writing this but I guess there wasn’t anything I could do. The weight was a bit much I would say.
Oh me? I am an Omanoid. I am capable of everything humans are that is emotions, reproducing, sleeping, eating and much more but I am not a human being. Crazy right?

Though it was a normal day. My life mostly began at night. Waking up, having lunch and flying across the city and attending college.
Till I met a real person.

"You are to serious you know that?"
I was often teased regarding that. So on Monday 21st 2605 I strolled through the streets wondering about this silly endeavor. I was of course concerned. I mean my college mates interacted with me pretty much and yet I felt lonely for some reason.
My Levator was still inside my carbon bag. All these devices could be folded to fit inside my pocket due to their organic nature. Levators were the main mode of transportation. They were capable of flight and could fit at least 3 people. Though it could be carried anywhere due to its shrinking nature making them quite efficient and reliable.

As I strolled, the combination of several blue shades and purple specks which made for an awe-inspiring view caught me of guard. I preferred somewhere dim however. I remember having read regarding a time period when only the moon was a reliable source at night. I often wondered how it might have felt but I am sure that it would have been quite gentle. It’s not as though you couldn’t feel the moon at all, but experiencing only the moonlight was more or less so rare that most Omanoids throughout their lives had never seen it even though our lifespan was quite long according to humans. I am young and 60 years old. Which is equivalent to an 18 year old human being if we go by general comparison.

Luckily I came across a back alley
It was pretty dim in comparison to those lights and well much more preferable. As I walked, I came across some outdated materials. It was mostly garbage in general terms but they were still interesting items. Like the invisible pen. Something we called a phone just 50 years ago.
I forgot why I was even there at that moment till I heard
Tick

I tilted and saw a person unlike anyone I had seen before.
Violet hair and eyes. It was a boy, dressed in rags. He seemed to be around my age.
But mostly, his eyes caught me of guard. They were dark, The eyes of someone who had lost everything. There was malice in them and yet they seemed pretty kind to.
He was sitting on the floor and I was in a very dominant, standing position.
From his point of view, I might have been looking down on an inferior being.

"D......don’t you dare touch me!"
The boy spoke with a tinge of fear and a bit of hostility in his voice.
"Who are you?"
I asked, particularly curious by what was happening.
"I don’t have a name to give you!"
For a normal person, that would have been enough to leave that matter as it was but I wasn’t what you would describe as "normal".
If anything, that response made me even more curious as to what was happening. Needless to say, I had forgotten about my silly monologue regarding teasing as well.
The boy was covered in wounds and seemed very weak. It was as though he had nothing to eat for maybe days. I wouldn’t have been surprised if I had found him dead but that was strange. It was true that Omanoids ate food but it wasn’t the only thing for sustenance.  In short someone dying from malnutrition was more or less believed to be a myth.

"If you are not going to say anything I guess I will start. My name is Lubric. I am currently in college who are?" I started the conversation completely ignoring what he said a minute ago
"I SAID I DONT HAVE..."
"There he is!!!"
I heard some familiar voices before the boy could finish his sentence
They were a group of people I was quite familiar with.
"Lubric??"
The person leading was a college mate of mine named Irona. Dark blue eyes, pale skin and emerald hair. He had a condescending look in his eyes.
But more than that, the  violet haired boy shrugged. He seemed terrified of him.

That was more than enough for me to discern what was going on
"What are you guys doing here?"
"I would ask the same thing"
"And why this boy seems as though the very life has been taken out of him?"
I asked with a stern tone completely ignoring his response.
"Oh! You mean this toy?"
He closed the distance between him and the boy
"What do you mean?" I asked calmly
"Can’t you tell? He is a human being. He will die eventually sooo"
he tightly gripped the purple eyed lad s shoulder,
"I am just seeing it through that it isn’t in vain at least"

The purple haired boy was dead silent. But I would be lying if I said I wasn’t surprised. Was it really like this? I never met or knew of any humans at that time but they existed I suppose. However it wasn’t my business or so I had thought. The word "toy" ringed a bell.
Why was that? I wondered
And even so I couldn’t ignore the fact that someone was about to die.

"Leave him!!".
And that was enough to shift his attention towards me.
"You know, you have always been an eccentric but I didn’t realize you would stoop to this level"
He had a disgusted look on his face and that meant trouble for me. It wasn’t a pleasant sentiment however I could care less about that.

He was slowly closing the distance
"So will you take his place instead then? Now that I think about, that idea doesn't seem half bad"
"Toy...." A term used for the lowest class members of our society. Someone with no will or rights. They were simply what the term suggested.... a mere toy....
It was practically a taboo to say it out in the public until unless the speaker owned the person... However the mere mention of it, even by mistake was normally enough to cause murders. If nothing else Quarrels were a must as well... But as I said before
I was far from normal
I directly Gazed into Irona s eyes with a cold look and smiled gently.
As i did, he stopped and took a step back. That hesitation was a good sign so I continued.
"Well good luck with that"
I extended my arm and it flashed blinding him. I grabbed the meek lad tightly and ran.
His hands were drenched in sweat, another unusual thing to encounter.
I arrived in those shades of blue and purple in no time. The boy gasped. He was in a much worse condition than I had initially thought. I took the levator out of my bag. My alleged pursuers were 10 meters behind at that time. I pushed the boy inside and got in myself. It floated and that was the last of what I saw of those guys.
The boy had fainted at that point. I suppose he wasnt in a condition to run but it was necessary.
His body was pretty tender. As the levator floated I thought about what had happened while gazing over the city. Did I mention that while the people outside couldn't see the passengers, the inside of these devices was more or less invisible... In other words it gave a sensation of flying itself even though that wasn't the case.
"You are just a toy"
I remembered those words clearly. I wasn't aware of the speaker though but I remembered they were uttered to me during my tender years.  It was around the time when war was still eminent. Though I had forgotten. Maybe that was the reason why I wasn't aware of human beings due to that account which I had long given up on recalling.
"Why was I doing this?" I thought
Maybe because I was alone or may be I wanted to know what was it that made the bewildered lad the way he was.
But all in all I would never have imagined that my silliness would have been my best yet maybe even the worst decision I had made in my 250 years of being alive. Worst? from a general perspective of my own people only
Since now that I look back, I don't regret it one bit. 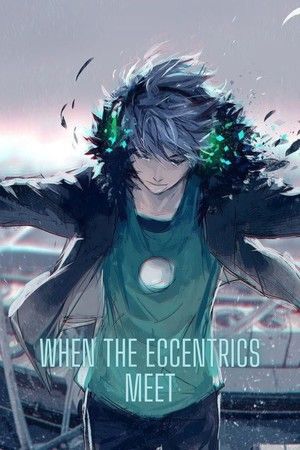 When the Eccentrics meet.