Once upon a time in Okutari, a coastal town that’s a few only a few miles long, there was an old school by the name of Keisetsuin High School. It was an old school that housed many generations of the villagers and their children. Somehow, it survived the toughest typhoons and even wars. Modern technology kept it standing, to the dismay of the elders, and saw many lives pass through its halls. Many hearts were shattered and much hope grew throughout the years. For a young boy and girl to meet and fall in love with each other, it was all too common of a story within these walls.Bookmark here

Most denizens of Okutari can recall the spot where they had confessed to their spouses and where they had been rejected by past loves. One such couple had met - one was a handsome young man who enjoyed burying his nose in books. He got along very well with the rest of his classmates but always found time to read in between. He was good-natured and always believed the good in everyone around him. The other was a pretty young woman who enjoyed running whenever she could. In rain, she would wear a hoodie and try her best not to slip. In the winter, she would complain about not being able to move. However, her teammates always admired her and adored her and she always gave them pointers to improve.Bookmark here

The two had been on the opposite ends of the academic spectrum but eventually crossed paths - it was an old school and it was a small school. She needed help with a particular subject and he had to tutor her. The two had become very close very quickly. Feelings burst quickly and they had already confessed their love by the end of the first semester - it felt right, they thought. They drove each other mad in the right ways where it pushed them.Bookmark here

Did it surprise anyone in the school? Of course not.Bookmark here

But it shocked one person. It’s better to say she was angered.Bookmark here

A young, meek girl, in the same year as these two young students, had her heart crushed. She had loved the young man from afar since they met at the entrance ceremony when he showed her a kindness that most boys his age wouldn’t dare to. He had since stolen her heart but unfortunately, she couldn’t focus on books as much as she wanted. While the young students of Okutari had to attend Keisetsuin High School, she had to carry the tradition that each female member of her family carried the torch as team captain for the track team before her second year.Bookmark here

And the young woman stood in her way. By all accounts, she treated the young, more talented girl, as a friendly rival and kept her love for the young man a secret. But when she got the nomination for the team captain instead of the meek girl, her heart shattered. She had broken tradition and her family was furious with her.Bookmark here

It wasn’t her fault. It wasn’t the girl’s fault. She was better than her. She’d rather read and write instead of run. She wanted to read the different books of the world and travel to the different worlds instead of forcing herself to a position that was supposedly ordained by birth.Bookmark here

She carried her failures with her to school for as long as she was in second place.Bookmark here

However, when she found out the new team captain had confessed to the young man, and he accepted her feelings, she was shocked. She was hurt. Her heart shattered as so many did prior and after her. Most people who were high school sweethearts, she was led to believe in her books, usually ended up together forever. There was absolutely no chance that he would even look her way.Bookmark here

When the team captain told her about this, the meek girl reacted poorly in front of the others, even. She cursed the team captain and told her things that she would never be able to take back in this life. As a high school student, these were precious years that blew quickly as the waves that hit the coast of their town - the meek girl was promised a fanciful romance but because of her self-isolation, the poison her family injected after not reaching their goals, she was doomed to be ignored by her class and even more so after she did that.Bookmark here

No one could understand the meek girl’s anger. She didn’t tell them about the abuse she took so long as she wasn’t team captain but maybe that day, they understood. Maybe that day, when it happened, they misunderstood.Bookmark here

The meek girl became more isolated as the two continued their courtship. The young man never knew about her. The meek girl just faded to the background more in his sight as the team captain became his world. But because of her poor reaction, the other students took it upon themselves to continue the chain of abuse. Maybe to them, it was just a joke here and there - but the meek girl merely delved deeper into her loneliness and despair. Every day, she expected something a new ghastly prank on her from them.Bookmark here

Until one day, the class was solemn.Bookmark here

The meek girl had gone in late that day - she had a medical emergency that caused her to be late. And would it have made a difference if she was on time?Bookmark here

Because the previous night, the police had to be called as they found the body of the team captain, strangled.Bookmark here

Strangled with a fury that the class thought to be her own. She could tell that even the teacher quietly agreed with them.Bookmark here

There was no one else who reacted badly to her relationship. There was no one else who hated her. Everyone was there. Don’t you remember how angry she was? Can you believe someone could go that far? Well, she reads those weird books. Maybe… Oh, I can’t believe that they even let her walk around freely! Why was she really late? Was she hiding the evidence?Bookmark here

I suppose she can finally be the team captain after all.Bookmark here

When the title was begrudgingly passed to her, even the teacher supervisor was reluctant to.Bookmark here

Ah, so they really believed everything told to them.Bookmark here

And then he started screaming at her. It’s all her fault - if only she had just shut her mouth! If only she could’ve just accepted the fact she was the team captain, and she would never be. She’s cruel and she apparently had the power to curse people to death. She’s a witch now. A witch with enormous power - but would a witch really do something so obvious? If she were truly guilty, would she feel so bad? Would she want to talk to someone?Bookmark here

The police never interviewed her as a suspect - they already apprehended someone; an old man that lived close to the school. The meek girl was interviewed about the old man and how he interacted with them and the meek girl told the truth - he liked to watch them run. He always tried to get close to them. And when the young man met the now previous team captain, the old man would talk to him too. Supposedly, the police told the meek girl that her classmates cited her name as a suspect - but they didn’t believe such a meek girl would do such a thing.Bookmark here

When they arrested the old man, there were more whispers of her being a witch. Their cruel pranks went up a notch. They said it was now an anti-witch movement and she was the sole witch.Bookmark here

She wanted to stand up for herself but when she stepped on a tack when she put on her shoe, someone jeered: “The witch bleeds after all!”Bookmark here

It was enough. She had to tell her parents. The parents, at first, didn’t believe her until she showed them the blood.Bookmark here

The school defended them. Maybe she was a witch. After all, she cursed the previous team captain and she’s dead. She cursed the nice old man, and now he’s arrested for murder. It’s all her fault. She’s the one who has to face the true punishment.Bookmark here

She’s the witch after all.Bookmark here

It was then her family finally snapped. They moved out of Okutari, a move that hardly anyone ever did. They had to move - they couldn’t believe they spouted such nonsense. Everyone knew witches were from stories, fairy tales, and folklore, but they really believed it. Perhaps they realized the pressure they placed on their daughter was incredible - being the team captain wasn’t the end-all. Perhaps it was time for tradition to change - but the cost was incredible.Bookmark here

They moved to a new town for the remainder of her high school years where no one knew about the bullying. She was safe in a new town that accepted outsiders and helped her grow but she couldn’t forget about what happened. She didn’t know that the young man fell into a hole himself and started spouting tales that he could see the fallen love of his life.Bookmark here

That witch wouldn’t be welcomed anymore. That witch’s power was incredible that she gave the dead power. Was that the promise she gave her? Ah, now this is sounding incredible now. Ghosts and witches don’t exist - but it hurts that she’s gone. There had to have been a reason why she’s gone. Her light was burning the brightest and now the old man is dead. Her curse… it’s surely not real anymore. There’s no way she could still have reach.Bookmark here

Every year, we would remember that girl that never could outrun her strangler. I don’t know why it hurts so much.Bookmark here

And now that I’ve graduated, I can’t go back to school. They caught me a few times and kicked me out. They figured that I was still in despair after her death. The police finally asked me why I kept trying to break into the school to see her, a glimpse of her that will never be again.Bookmark here

And the only thing I could answer with was: “But I love her.”Bookmark here 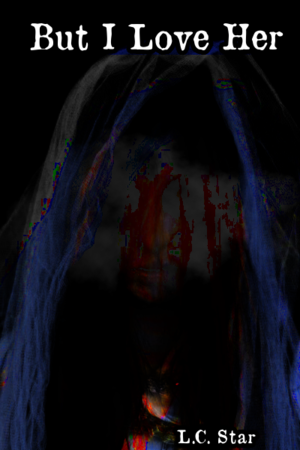