Ever since I was a child, I’ve been chasing someone.

I never saw their face, all I saw was a man dressed in a full black tactical uniform and gas mask.

They were the one to kill my mother before my eyes.

Even though I was young, I’ll never forget the sight. My only purpose in life was to find that man.

When I found myself waking up in the past, I didn’t feel fear or excitement. I felt now, I could really make a difference.

This time, I’d save her from the man in black myself.

I could really make a difference.

To do what I was too weak to do when I was young.

Today was the day…

Soon to be the darkest day in Tokyo’s history. The day Shinjuku disappears.

I won’t let it happen this time. I promise, this time it’ll be different

I ran to Shinjuku Station in my desperation to find Tatsuya and Mizuki; they were the only people I could trust. I can’t let them get taken.

Bursting into the base with great urgency and upon spotting Tatsuya and Mizuki speaking to each other in hushed tones, I interrupted with one word, “Office.”

“Turn… Turn on the news” I gasped as I tried to catch my breath. You’d think that for someone who had been running so much in recent days that my lungs would be able to handle it better.

The screen flickered to life as Mizuki tapped the button to increase the volume as the door closed shut.

Coming to life with the same scene I had seen on the rooftop with Eric, Tatsuya tensed as he realised that it was footage of the unmanned base but the words scrolling across the screen presented it as a terrorist attack, “–terrorist attempt on a military base,”

What followed was a snippet of my voice and my masked expression flaring up on the screen, “I did what I did last night to set the world free–”

Mizuki gasped as she looked at me, “When was this?!”

I protested to Mizuki and Tatsuya as now clearly they were cutting what I had said short and using it to further manipulate their objectives.

Tatsuya lifted a finger to hush me.

The screen cut to a map of our location with markers indicating where we were expected to be, with blinking dots most likely indicating armed forces heading our way.

Eric’s face flashed across the screen, illuminated by flashing lights from cameras, “These terrorists, have to be shown that this display of violence is not acceptable–”

Tatsuya immediately jumped into action, thundering “Terrorists?!” in disbelief. He hastily picked up a microphone for the internal communications systems, “This is not a drill, we have to move out NOW. Military units are closing in, move to gathering points for immediate evacuation, prepare for military engagement.”

I heard a flurry of action begin as the dozens in the building rushed into action.

I rushed to change my clothes. In my effort to lose anyone following, I’d ripped up my favourite jacket. I opened Tatsuya’s closet and grabbed his black military style jacket. I placed a bullet proof vest over myself and wrapped the jacket up tight. LB slotted herself inside my front pocket.

I slotted my mask back over my face and threw the hood over my head.

It was time to change history.

Eric’s voice continued in the background as Mizuki shushed Tatsuya in panic, “–we have located them and are moving to their location to bring them to justice–”

Mizuki scattered as she ran to check on Yin.

Turning to the weapons cabinet he had, he threw its doors open as he glanced at me, asking me if I needed to stock up on ammunition. I nodded solemnly, better to have more ammunition than to need it and not have any.

A shockwave shook the station, “–breaking news, shockwaves have been felt from the station, we have been told that this is retaliation from the terrorists– potentially another bomb–” the news cut off in an ominous fashion.

My wide eyes met Tatsuya’s, my expression was of abject horror while his was of solemn frustration. By his expression, I could tell he was infuriated at the discovery that his benefactor and friend had set him up.

Mizuki burst into the office, with Yin in her arms, “We have to go.”

We burst out of the office as Tatsuya herded us down the maze of hallways and corridors, people swarming in panic and others with determination to arm up and delay the military forces for as long as they could.

“This way,” Tatsuya grunted as our footsteps echoed in the space around us, “I’d always planned for us to be ready to disappear, but never expected to have to do so soon.”

Tatsuya explained to me that the intention for the water drainage area was to flood the base to ensure that all traces of the base would be wiped and potentially obstruct the ingress of any enemies.

A thunder of footsteps began to approach us, as we attempted to hurry, the sounds of an exchange of gunfire reached us as we were horrified with some members bursting into tears.

I popped my head out from the corner and took some shots, downing any who came round the corner.

Whilst we were huddled with the other members of Dragon’s Breath, Tatsuya promptly ordered for people to split in teams and to make their exit ahead of us. Some members choked back emotion for the members who had chosen to stay back and buy us some time.

Emotions were high and Tatsuya did his best to usher them on, “If you don’t move, the sacrifice of the people left behind will be for nothing, move and survive.” His last words were full of urgent emphasis and the members began to go ahead in a hurry, with no desire to meet the same fate as the brave people who chose to stay behind.

A deafening crack cut through the approaching din of hurried footsteps in our direction. Mizuki lurched forward and as one hand grabbed onto the railing for support, her other hand flew up to cradle Yin to ensure that she was secure.

“Take her.” Mizuki gasped as she did her best to distribute her weight to prevent the walkway from splitting further.

Mizuki settled younger Yin down in front of her as she wiped her tears away, “You’re a brave girl, I love you so much, you just have to be a little braver and reach as far as you can go, okay?”

It felt odd watching something that felt intently ingrained into my memory, I reached over the gap as Mizuki carefully handed me my younger self who did her best to reach her tiny palms towards me.

“Tatsuya, you take care of our girl,” Mizuki’s words hung in the air, her tone was firm though her, her voice trembled with unsaid emotion.

Every muscle in my body screamed at me to move, every reflex in my body wanted me to do something. Anything.

Tatsuya stiffened; this new knowledge hit him like a truck, but he knew that time was not a luxury he had to digest this new information.

Everything felt like a twisted déjà vu as I scooped up my younger self, handing her off to Tatsuya.

“You need to get her out of here right now, I’ll find my own way.”

Not again. I must be able to do something. Anything.

I watched as my younger self started to stir, and it was at that moment, I turned my back and dashed towards Mizuki, hearing the thuds of Tatsuya’s footsteps away.

Mizuki’s eyes locked with mine, her eyes brimming with tears, mourning the loss of the future to spend with the family she had in the future she strived so hard for, she threw a small object my way and I reflexively caught it.

“GO!” Mizuki choked out as she slammed on the button.

I stood frozen in place as the sound of water roaring jarred me into action, as I leapt off the catwalk out of the way of the water as the walkway under Mizuki’s feet gave way, dropping and washing away almost every trace of Mizuki and the armed forces that had previously cornered us.

The door slammed shut as the rushing water washed anyone inside away. The water raging beyond.

It was then I realised, my young memory of this moment. A man dressed in black closing the door on my mother and killing her.

Dressed in black, here I was standing at that very door.

For the first time, my mind completely broke. 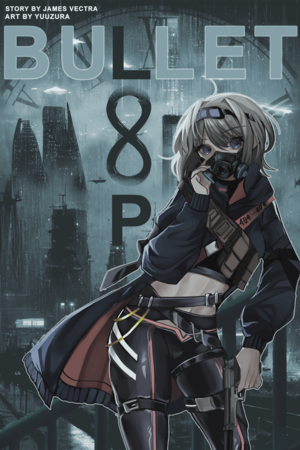